René of Châlon (5 February 1519 – 15 July 1544), also known as Renatus of Châlon, was a Prince of Orange and stadtholder of Holland, Zeeland, Utrecht and Gelre.

René was born in Breda, the only son of Count Henry III of Nassau-Breda and Claudia of Châlon. Claudia's brother, Philibert of Châlon, was the last Prince of Orange from the house of Châlon. When Philibert died in 1530, René inherited the Princedom of Orange on condition that he used the name and coat of arms of the Châlon-Orange family. History knows him therefore as René of Châlon instead of as "René of Nassau-Breda." [1] 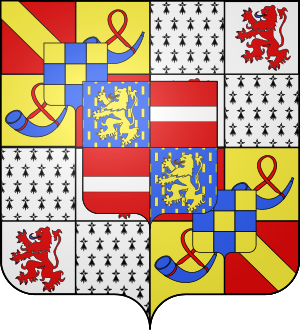 Coat of arms of Rene of Chalons as Prince of Orange. The 1st and 4th grand quarters show the arms of the Chalons-Arlay (the gold bend) princes of Orange (the bugle). The blue and gold checkers represent the arms of Jeanne of Geneva, who married one of the Chalons prices. The 2nd and 3rd show the quarterings of Brittany and Luxembourg-St. Pol. The inescutcheon overall is his paternal arms quartered of Nassau and Breda.[2]

In 1544, René took part in the siege of St. Dizier in the service of Emperor Charles V. He was mortally wounded in battle and died with the Emperor attending at his bedside.[3] René was buried in Grote Kerk in Breda, near the resting-place of his short-lived daughter. A commemorative cenotaph stands in the church of St. Etienne in Bar-le-Duc.

The principality of Orange had already passed, through the female line, from the first dynasty of Orange to the families Les Baux, and then to De Châlon.[4] It now passed to a family which was not descended in blood at all from any of the preceding families.

William added the name of Orange to his own paternal dignities and thus became in 1544 the founder of the House of Orange-Nassau.