Republic of the Rio Grande

From Infogalactic: the planetary knowledge core
Jump to: navigation, search
Not to be confused with the contemporaneous Riograndense Republic in Brazil.

After a decade of strife, Mexico won its independence from the Kingdom of Spain in 1821. After a failed attempt at a monarchy, Mexico adopted a new constitution, the 1824 Constitution. This new constitution established los Estados Unidos Mexicanos, or "the United Mexican States," as a federal republic.

In 1833, General Antonio López de Santa Anna was elected to his first term as president and was, at the time of his election, in support of the federal republic. However, after some members of government angered Santa Anna's political allies, Santa Anna decided to start a centralized government.[1] Santa Anna suspended the constitution, disbanded Congress and made himself the center of power in Mexico. This led to the eruption of a number of uprisings and secessionist movements throughout the country, the most successful being the Texas Revolution. Less successful secession movements were attempted by the Republic of Zacatecas and the Republic of Yucatán. At the same time there was filibuster activity in the country that sought to expand slavery in Mexico. Many of the caudillos that initiated and participated in the rebellion also participated in later violent secessionist movements.

On January 17, 1840 a meeting was held at the Oreveña Ranch near Laredo.[2] A group of notables from the states of Coahuila, Nuevo León, and Tamaulipas advocated a rebellion seeking secession from Mexico and formation of their own federal republic with Laredo as the capital. However, those states' own congresses and governments never took any action to support the insurgents, and requested the help of the Central government in Mexico City to aid the local state armies.[3]

File:Texas Mexico Disputed Border 1836 to 1848.PNG
The Republic of Rio Grande was a brief attempt to create an independent nation inside northern Mexico. The insurgency lasted from January 17 to November 6, 1840.

The insurgents designated their own officials. They were:

After the meeting, the insurgents temporarily moved to Guerrero, Tamaulipas, for security reasons. After the Battle of Morales in March 1840, the government moved to Victoria inside the Republic of Texas, where it remained until the rebellion collapsed later that year. 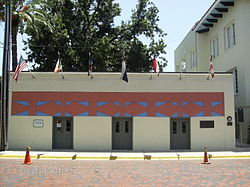 The respective armies of the insurgents General Antonio Canales and Mexican General Mariano Arista met at Morales, Coahuila, on March 24 and 25 1840. The Centralist Mexican forces defeated the insurgent forces. Included in this defeat was the trial and execution of 23 members of the insurgents' cavalry, including Colonel Jose Antonio de Zapata, the commander of the cavalry, on March 29.[4] General Canales and the remaining insurgents that survived the Battle of Morales sought refuge in San Antonio, Texas.

General Antonio Canales Rosillo traveled throughout Texas to build awareness of the rebellion for which he now fought. He also toured Texas to ask Texans to volunteer to fight his cause.[5]

General Canales was in Austin the second half of April 1840, where he met with President Mirabeau B. Lamar.[6] It is said that President Lamar privately supported the new republic’s actions, but felt that public endorsement would hamper Texas’ efforts to secure recognition of its own independence from Mexico. General Canales left Austin for Houston on May 2 to continue to build awareness and seek volunteers.

While official recognition from the Republic of Texas was not obtained, General Canales' tour was met with some success. On June 1, he arrived in San Patricio, where the rebellion forces had been reorganizing. In addition to 300 volunteers, the army had grown to include 140 Texan and 80 Native American volunteers. The Texan volunteers were led by Colonel Samuel W. Jordan.[7]

General Canales sent Colonel Jordan and approximately 90 Texan volunteers south into disputed territory in late June; they crossed the Rio Grande, and took Ciudad Victoria, the capital of Tamaulipas, without any resistance. A few of those who were guiding Colonel Jordan were still loyal to the Centralist government of Mexico and were trying to lead the Texans towards San Luis Potosí, where a Mexican ambush awaited. Colonel Jordan suspected such and diverted his troops to Saltillo, Coahuila, where, on October 25, he was attacked by Mexican General Ráfael Vásquez. Despite the fact that part of his troops deserted, Colonel Jordan was still able to defend himself and return to Texas.[8]

In November, representatives of Generals Canales and Arista met to discuss the war. During this meeting, the Mexican government offered General Canales the position of brigadier general in the Mexican army in exchange for his abandoning the cause of the rebellion. General Canales accepted the offer on November 6. Upon this event, the Republic of the Rio Grande rebellion failed.

Flag of the republic 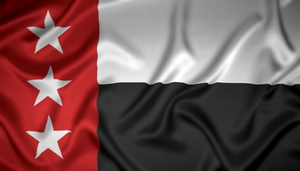 The republic as a tourist attraction

Remnants of the republic's effect can be seen in: