Captain Sir Samuel Brown of Netherbyres KH FRSE (1776 – 13 March 1852) was an early pioneer of chain design and manufacture and of suspension bridge design and construction. He is best known for the Union Bridge of 1820, the first vehicular suspension bridge in Britain.

Brown was born in London, the son of William Brown of Borland, Galloway, Scotland.[1] He joined the Royal Navy in 1795, serving initially on the Newfoundland and North Sea stations. He served as lieutenant on HMS Royal Sovereign (1803) and in 1805 joined HMS Phoenix as first lieutenant. During his service on Phoenix he took part in the capture of the French frigate Didon.[2] The following year he was appointed to HMS Imperieuse, followed by periods of service aboard the HMS Flore and HMS Ulysses.[3]

During his service, he carried out tests on wrought iron chain cables, using them as rigging for HMS Penelope in 1806 on a voyage to the West Indies. This so impressed the Admiralty that on his return in 1808 it immediately ordered four vessels of war to be fitted with chain cables.[4]

In 1808 Brown took out patents for twisted open chain links, joining shackles and swivels. His shackle and swivel designs were scarcely improved on for the next 100 years.[5][6]

By 1811, he was promoted to commander (in 1842 he accepted the rank of retired captain),[3] and his chains were introduced to hold ships' anchors. He retired from the Navy in May 1812. Just four years later, the Royal Navy standardized on iron chain instead of hemp for all new vessels of war.[6] 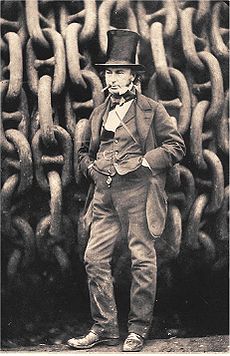 Brunel in front of the chains made at Brown's Pontypridd ironworks for the SS Great Eastern.

He established a company (known as Samuel Brown & Co and also Brown Lenox & Co) with his cousin Samuel Lenox,[4] based initially at Millwall in east London from 1812 and then, from 1816 at a larger works (a nail works previously operated by William Crawshay Brown), establishing the Newbridge Chain & Anchor Works (Pontypridd) at Ynysangharad, beside the Glamorganshire Canal, in Pontypridd, south Wales, close to large reserves of iron and coal.[4][7][8]

His firm went on to supply all the chain to the Royal Navy until 1916, and made the chains for Brunel's SS Great Eastern, famously photographed by Robert Howlett.

Brown was also invited to participate in abortive proposals for a suspension bridge at Runcorn. In September 1818, he submitted drawings for Union Bridge over the River Tweed, which was completed in 1820 and survives.

Brown went on to build several further chain bridges, as well as the Trinity Chain Pier in Newhaven, Edinburgh (opened in 1821 and destroyed in a storm in 1898) and the Chain Pier at Brighton (1823-1896).[9] Most of his designs used an unstiffened bridge deck, before it became clear that this form was vulnerable to wind forces and unstable under concentrated loads. His designs were reviewed by eminent engineers including John Rennie and Thomas Telford, and generally approved. Brown's designs were significantly less conservative than his contemporaries, adopting a higher tensile strength for his iron chains.

One of his homes was close to the Brighton project, at 48 Marine Parade, now known as Chain Pier House. In 1827, Brown purchased Netherbyres, a country house near Eyemouth in Berwickshire, south-east Scotland.[14] He had the existing house demolished and a new house built (c.1836), which he later sold on 5 March 1852, days before his death.[15]

Brown was elected a member of the Royal Society of Edinburgh on 7 February 1831.[17] In 1838, Brown was knighted by Queen Victoria.