From Infogalactic: the planetary knowledge core
Jump to: navigation, search
For other people named Sancha of León, see Sancha of León (disambiguation).

Sancha Raimúndez of León (c. 1095/1102 – 28 February 1159) was a Leonese infanta, the daughter of Raymond of Burgundy and Queen Urraca of León and Castile and the older sister of Alfonso VII of León and Castile. Her body is claimed to remain incorrupt[citation needed].

She grew up as well as with her mother, along with her aunts, the infantas Sancha and Elvira, daughters of Alfonso VI of León and Castile, who at the time enjoyed the possession of the Infantado, i.e. a set of distributed monasteries and churches throughout the kingdom, and the death of their own, which could only be unmarried infantas, had to return to the Crown, as in the case of the Infanta Sancha, who also held the office of Infantados of the kingdoms of Leon, Castile and Galicia.[1]

On the death of her mother, Queen Urraca in 1126, was succeeded by her son Alfonso VII who appointed his sister the Infanta Sancha Queen precedent that had sat his grandfather Alfonso VI to confer the title of queen to her sister the Infanta Urraca of Zamora.[2] The Infanta-Queen Sancha then became one of the leading directors and employees of her brother the king, her name almost always appeared in public documents of her brother. In 1127, a year after the death of her mother, Infantado received from his brother, which made her mistress of several of the most important monasteries of the kingdom, including that of San Isidoro de León.[3] First took possession of the Infantado of León, and later, those of Galicia and Asturias. Infantados inherited all that was in the Kingdom of León, and they were the Covarrubias, Valle del Torío, León, Tierra de Campos, El Bierzo and Asturias.[4] In 1138 promoted the restoration of the Monasterio de Santa María de Carracedo, ceding it to the monks of the Monastery of Santa María de Valverde near Corullón.

The Infanta Sancha in 1141 donated the monastery of Santa María de Wamba, now gone, with all its lands, villas, churches, estates and possessions to the Order of St. John of Jerusalem, «pro redemptione omnium peccatorum meorum, pro salvatione anime mee, pro anima patris et matris mee et pro etiam anime domine Gelbire, mee amite».[5] A donation to the Hospitallers in 1141 was such that during the following years, the contacts between the infanta and the Knights of St. John were almost always associated with this grant. The lands and places donated to the Hospitallers had been part of an Infantazgo that had belonged to Sancha's father, Count Raymond of Burgundy.[6] Seven years later, in 1148, she donated, to the Order of St. John of Jerusalem, the es (Church of Santa Maria de Olmedo), and a year before, in 1147, founded the Monastery of Santa María de La Santa Espina, in the province of Valladolid, which foundation was confirmed by her brother King Alfonso a year later.[7]

In 1148, assembled the cortes of the kingdom in the city of Palencia, the Infanta-Queen Sancha received from her brother the emperor, the bishops and of the heroes of the kingdom to the Augustinian canons who lived in the Monasterio de Carbajal de la Legua be moved the Collegiate Church of San Isidoro de León, Pantheon of the Kings of Leon and at the same time, that the Benedictine nuns who lived in San Isidoro de León for over two hundred years be moved to the Monasterio de Carbajal de la Legua, fulfilling the infant with the order's own St. Isidore of Seville, in an appearance that had ordered him to leave the monastery.[8]

In 1156 she donated to the Order of the Hospital of St. John of Jerusalem, the town of San Juan de Arenas, in the Asturian council of Siero, provided they never alienate,[9] and that same year, granted to the canons of St. Isidore of Leon the privilege, signed by her brother the king, that all men who wished vassals could declare the Monastery "by behetría right", i.e., could be incorporated into the jurisdiction of the monastery carrying all their possessions, but being dispensed from then to pay any tax to the king.[10] Her brother Alfonso VII died the following year, in 1157, was succeeded on the throne of León by Ferdinand II of León and on the throne of Castile by Sancho III of Castile who only reigned for a year and succeeded by his only surviving son Alfonso VIII of Castile.

She died on 30 February 1159 and was buried in the Pantheon of Kings in San Isidoro de León, where her mother, Queen Urraca had been interred. The remains of the Infanta Sancha, preserved incorrupt today, were deposited on the inside of a stone tomb, still preserved, on whose deck, which although is halved is completely preserved, was sculpted the following epitaph in Latin:[11] 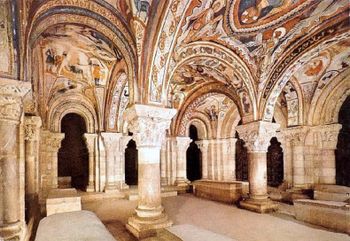 During the War of Independence, the Pantheon of Kings in San Isidoro de León became a stable and the bodies buried there were removed from their graves by French soldiers and piled in a corner after being picked up by the canons of the collegiate and brought to the church of Santa Marina de León, except the Infanta Sancha, that because of the veneration that she professed, was picked apart and taken to the house of a neighbor of León, where she remained until the end of the war, which was returned to the church of San Isidoro in the presence of the authorities of the city, being placed the mummy in a tomb, but without cover, as the cover of the real tomb of the princess appeared several years later halved.[12] In 1858, Queen Isabel II of Spain visited the Basilica of San Isidoro de Leon and the Infanta Sancha's mummy, which was naked. So when the Queen returned to Madrid, she sent a gold brocade robe for the mummy to wear, but the cloak disappeared during the ???Revolutionary Sexenio??? apparently stolen by the provincial governor, who loaned it so he could make a copy of it, so that his wife did a replica for her, and yet never returned.[12]

During the study of the tombs of the Pantheon of Kings in San Isidoro de León, completed in 1997, it was determined that the body of the Infanta lay incorrupted, as did that of the Infante Ferdinand, son of Ferdinand II of León, who also lies buried there. Placed on the cushion where the head of the Infanta Sancha lay was found a letter, dated December 22, 1868, which explained: "In the year 1868, during the reign of Doña Isabel II, the Pantheon of the Kings was found in a completely abandoned state, and the body of the queen Doña Sancha, perfectly preserved in a state of mummification, was found completely nude. The Pantheon was restored by the effort of the governor of this province, D. Manuel Rodríguez Monje, and the body of the queen Doña Isabel II was dressed in linen donated for this purpose by his daughter Doña Carmen."[13]

Moreover, in the Collegiate of Covarrubias is placed a stone tomb, dating from the fifteenth century, which is supposed to contain the remains of the Infanta Sancha, who granted their Fueros the town of Covarrubias in the year 1148.[17] About the lid of the tomb attributed to the infant appears abbey and the cross carved on the front is placed quartered shield of Castile and León, which was awarded to the infanta Sancha by her brother the king.[18]

In the Monastery of Santa Maria de La Santa Espina, located in the province of Valladolid, near the altarpiece, on the Gospel side, is placed a statue depicting praying the Infanta Sancha Raimúndez, made of alabaster, although the infant was not buried there.[11]

After his death, the institution of the Infantry declined and virtually disappeared as such, since it is no longer assets of the infantas who remained unmarried. Years after the death of Alfonso VII, King Alfonso VIII of Castile donated goods Castilian Infantado to different churches, as the Collegiate of Covarrubias or the Monasterio de las Huelgas de Burgos, while in the kingdom of León, his uncle Fernando II donated his sister Sancha of Castile, Queen of Navarre, all of the Leonese Infantado.[19]