From Infogalactic: the planetary knowledge core
Jump to: navigation, search
This article is about the city. For the adjacent town, see Sheboygan (town), Wisconsin.
See also: Cheboygan (disambiguation)

Sheboygan is a city in and the county seat of Sheboygan County, Wisconsin, United States.[3] The population was 49,288 at the 2010 census. It is the principal city of the Sheboygan, Wisconsin Metropolitan Statistical Area. The city is located on the western shore of Lake Michigan at the mouth of the Sheboygan River, about 50 mi (81 km) north of Milwaukee and 64 mi (103 km) south of Green Bay.

Migrants from New York, Michigan, and New England were among the pioneers to this area in the 1830s. One very early settler remarked "Nearly all the settlers were from the New England states and New York."[4] Lumbering was the first major industry, as trees were harvested and shipped to eastern markets through the Great Lakes. Sheboygan was officially founded in 1846.[5] Much of the town was platted in 1836, when property investors laid out more than 1,000 lots.[6]

By 1849 the community was known for its German population, as it became a destination of a wave of German middle-class liberal immigrants, who reached the United States after the Revolutions of 1848 in the German states. On June 26, 1849 William Williams wrote, "arrived at Sheboigin [sic] on the Wisconsin side, a small town, population purhaps (sic) from 700 to 1000. This is a promising place. there are a great many best class of Germans settling around it. tis all along this Lake so far quite an interesting country."[7] Between 1840 and 1890, Protestant Dutch immigrants also settled in areas of Wisconsin, including Sheboygan.[8] Dutch and Irish immigrants also came during this period, the Irish because of the Great Famine. Settlers of both English and German ancestry were overwhelmingly opposed to slavery.[citation needed]

In the spring of 1898 Sheboygan elected Fred C. Haack and August L. Mohr as aldermen, making them the first two Social Democratic Party candidates to be elected to public office in the United States. Haack had originally been elected in 1897 as a member of the Populist Party, but joined the Social Democrats after they had organized locally. Haack served as an alderman for sixteen years before moving to Milwaukee and being elected as a Socialist alderman there. At the Socialist Party's 1932 convention Haack received recognition as the first Socialist officeholder in America.[9][10]

In the early 20th century, many Slavonic Catholics[clarification needed] and Lithuanians immigrated to Sheboygan. In the late 20th century, numerous Hmong immigrants from Laos and Southeast Asia were helped to settle in the city, beginning with men who had fought for the CIA in the Secret War.[citation needed] 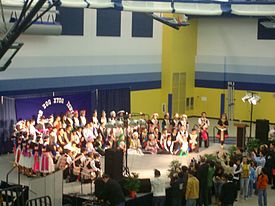 In 1976, the first three Hmong families were settled in Sheboygan with the help of refugee agencies. They were refugees from Laos, where communists had taken over the government and targeted the Hmong as allies of the US. By 1990, the city had 2,000 residents of Hmong descent. The people have struggled to gain a place in the US, as they were isolated by language and lack of a written language tradition. Through the 1990s, gang crime among this group began to increase, reflecting social problems in the community.[11] By December 1999, there were around 5,000 Hmong and Hmong American residents in Sheboygan, 65% of whom were under the age of 18.[11]

In December 1999, Robert L. Kaiser of the Chicago Tribune wrote,

"Sheboygan, like many heavily Hmong small towns in Wisconsin, has few readily apparent signs that such a large Hmong population is indeed there", as there were very few Hmong-owned businesses and "[m]any Hmong residents tend to keep to themselves."[11]

At that time, he reported that many Hmong residents still worked in jobs that did not require significant English fluency, such as automotive parts plants and other factories.[11]

In 2006, a Sheboygan Hmong Memorial was installed in a city park to honor Hmong military and civilian contributions to the Secret War in Laos (particularly from 1961-1975).

Sheboygan has a warm-summer humid continental climate[13] typical of Wisconsin. In spite of its position on Lake Michigan there are vast temperature differences between seasons, although its somewhat moderated compared with areas further inland.

There were 20,308 households of which 30.7% had children under the age of 18 living with them, 43.4% were married couples living together, 11.7% had a female householder with no husband present, 5.1% had a male householder with no wife present, and 39.8% were non-families. Of all households 33.4% were made up of individuals and 12.1% had someone living alone who was 65 years of age or older. The average household size was 2.38 and the average family size was 3.06.

Sheboygan has a mayor–council form of government. The mayor is elected by general election for a term of four years, with no term limits. The Common Council consists of 16 alderpersons representing the city's eight aldermanic districts. The chief administrative officer, or city administrator, oversees the day-to-day administration of the city and is appointed by the Common Council.

The Sheboygan Police Department is the law enforcement agency in the city. Civil and criminal law cases are heard in the Sheboygan County Circuit Court. The Sheboygan Fire Department provides fire suppression and emergency medical services, operating out of five fire stations.

Sheboygan is in the 6th congressional district of Wisconsin, which is represented by Glenn Grothman. 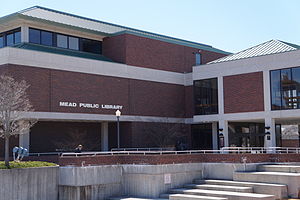 High schools within the city include: 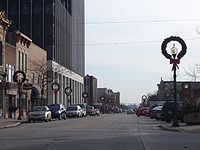 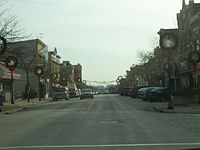 Interstate 43 is the primary north-south transportation route into Sheboygan, and forms the west boundary of the city. U.S. Route 141 was the primary north-south route into Sheboygan before Interstate 43 was built, and its former route is a major north-south route through the center of the city that is referred to as Calumet Drive coming into the city from the north, and South Business Drive from the south; between Superior and Georgia Avenues, the highway is known as 14th Street. Four-lane Highway 23 is the primary west route into the city, and leads into the city up to North 25th Street as a freeway. Other state highways in the city include Highway 42, Highway 28, which both run mostly along the former inner-city routing of U.S. 141. Secondary county highways include County LS to the north; Counties J, O, PP, and EE to the west; and County KK to the south.

Shoreline Metro provides public transit throughout the city, as well as in Kohler and Sheboygan Falls. All routes depart from the Metro Center, more commonly known as the "Transfer Point" located in the downtown.

Sheboygan is served by the Sheboygan County Memorial Airport, which is located several miles from the city.

Sheboygan is bounded on the east by Lake Michigan. The city has no active port in the 21st century. Blue Harbor Resort is located on a peninsula between the lake and the Sheboygan River's last bend. This site was formerly used as the headquarters of the C. Reiss Coal Company (now a Koch Industries division). It was their base of operations for ships to load and unload coal for delivery along the peninsula.

The Sheboygan River passes through the city, but dams in Sheboygan Falls prevent navigation upriver. Tall-masted boats are confined to the river downstream of the Pennsylvania Avenue bridge. Commercial charter fishing boats dock near the mouth of the river.

The city's daily newspaper is The Sheboygan Press, which has been published since 1907. The free papers The Sheboygan Sun and The Beacon are mailed weekly to area residents and feature classified ads and other local content.

The city is served by television and radio stations in Green Bay and Milwaukee. A. C. Nielsen's television division places Sheboygan within the Milwaukee market, although Green Bay stations also report news, events, and weather warnings pertaining to Sheboygan and target the city with advertising.

Various religious stations originating from Milwaukee and north of Green Bay and a translator for Kiel's WSTM (91.3), and NOAA Weather Radio station WWG91 broadcast from a tower in Sheboygan. WYVM acts as a full-power relay of Suring's WRVN (102.7), which has a religious teaching format.

The city is served by Charter Communications and AT&T U-verse, with public-access television cable TV programming provided to both systems from "WSCS". The city at one time had a television station, WPVS-LP, which went off the air following the digital switchover.[19] 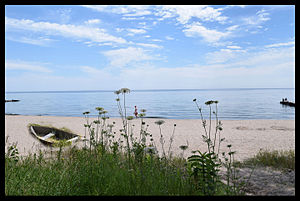 This public beach on Lake Michigan is located north and east of downtown Sheboygan.

The city has one trail along the Highway 23 corridor leading to the Old Plank Road Trail to the west of Sheboygan that uses dedicated paths and bike lanes. A 2013 project created a north-south trail using the former Chicago & Northwestern Railroad right-of-way, with future expansion planned. Other plans include paths along the Taylor Drive corridor, and improvements to the south to allow connection to the Ozaukee Interurban Trail.[citation needed]

Sheboygan is the site of a proposed new spaceport called Spaceport Sheboygan.[25]

Sheboygan has student exchanges with both cities.[28]