Sheffield Cathedral (The Cathedral Church of St Peter and St Paul, Sheffield) is the cathedral church for the Church of England diocese of Sheffield, England. Originally a parish church, it was elevated to cathedral status when the diocese was created in 1914. Sheffield Cathedral is one of five Grade I listed buildings in the city, along with Town Hall, Abbeydale Industrial Hamlet, and the parish churches at Ecclesfield and Bradfield. It is located in the city centre on Church Street and served by Sheffield Supertram's Cathedral stop. 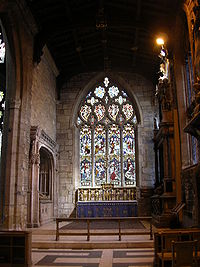 The site of the cathedral has a long history of Christian use. The shaft of the 9th-century Sheffield Cross, believed to have formerly been sited here, is now held by the British Museum.[1] It is probable that Sheffield's parish church, a satellite of Worksop Priory, was constructed here in the 12th century by William de Lovetot at the opposite end of the town to Sheffield Castle. This established the area of the parish of Sheffield, unchanged until the 19th century. This church was burnt down in 1266 during the Second Barons' War against King Henry III.

Another parish church was completed in 1280, but this church was mostly demolished and rebuilt about 1430 on a cruciform floor plan. The Shrewsbury Chapel was added in the next century, and a vestry chapel (now the Chapel of Saint Katherine) was added in 1777. The north and south walls of the nave were rebuilt in 1790–93 and a major restoration by Flockton & Gibbs, which included the addition of new north and south transepts, was completed in 1880. The church was originally dedicated to Saint Peter, but from some time after the reformation into the 19th century it was dedicated to Holy Trinity;[2] it has since been dedicated to both Saint Peter and Saint Paul.

The parish of Sheffield was subdivided into smaller parishes in 1848. The church is still the parish church for the smaller Parish of Sheffield, but in 1914 it was also made the cathedral church for the newly created Diocese of Sheffield. Plans were drafted by Charles Nicholson to extend the church and reorient it on its axis, but due to World War II these were greatly scaled down. The resulting additions leave the church an awkward shape in plan, but with an impressive south elevation.

On Thursday 2 April 2015, the Royal Maundy service was held in Sheffield Cathedral. The Queen distributed specially-minted Maundy money to 89 men and 89 women.[3] 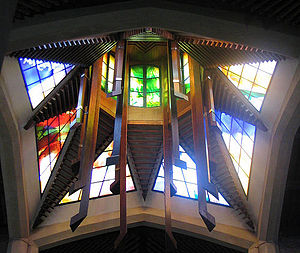 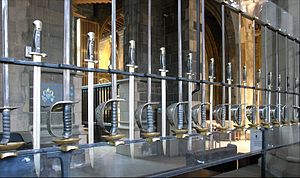 Screen of bayonets and swords in St George's Chapel

The east end of the current church is the oldest. In the east wall of the sanctuary there are stones from the 13th-century church. Dating from the 15th century are the sanctuary and chancel. The 15th-century cruciform church also included lofts and a rood chapel but these were ordered to be removed by Queen Elizabeth.[4] Their scars can be seen on the walls.

The chancel roof likely dates to the 16th century[5] and is a hammerbeam roof with gilded angels. The outstretched wings are a modern gift from the 1960s by George Bailey.

In the 1770s, rebuilding included the addition of tracery into the windows and a resurfacing of the walls with moorstone.[4] The addition of the vestry chapel of St. Katherine destroyed the cruciform shape of the plan. The Shrewsbury Chapel was constructed in order to house the Tudor monuments of the Earls of Shrewsbury.

The altarpiece in this chapel is considered medieval in date. On the south wall of the Shrewsbury Chapel is the alabaster monument to the 6th Earl of Shrewsbury with its architectural surround, armoured effigy, and Latin inscription. Multiple members of the family are buried in the vault. The monument on the left towards the sanctuary is to George Talbot, 4th Earl of Shrewsbury. It is made of fine marble, carved in an Italian style to depict the Earl and his two wives in positions of prayer. They are both fine examples of Tudor monuments. The east window is a monument to James Montgomery. 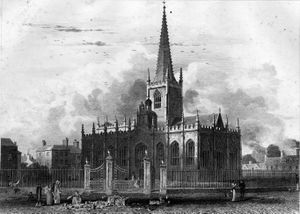 In the 1880s further reconstruction and rebuilding removed the galleries, moved the organ to the north transept to clear the chancel, and installed new oak pews.[5] The north and south transepts and west end were extended. A screen was constructed by local craftsmen for the Shrewsbury Chapel but was modified and moved to the north aisle in the 1900s.[6][5] During later restoration work in 2013, it was discovered that a number of the Shrewsbury coffins were missing from the crypt. [7]

Sir Charles Nicholson's design in the 1900s called for a radical realignment of the church axis by 90 degrees. However, funds and World Wars forced the designs to change. Those changes were implemented throughout the 20th century. The bulk of the changes have affected the northern part of the cathedral, which was extensively expanded. Immediately to the north of the nave is the chapel of Saint George, which commemorates the York and Lancaster Regiment. It is furnished with regiment flags and a screen made up of the bayonets and swords of the first regiment. Under the chapel of St. George is the vaulted crypt chapel of All Saints and the Te Deum window, which was designed by Christopher Webb. At the furthest north end is the Chapel of the Holy Spirit with a four-part vaulting system and a beautifully painted screen. The main entrance of the church is at the expanded west end, added in 1966 when the church was rededicated. The baptism font is at this end. The lantern tower was an earlier addition to improve light but its glass was replaced by an abstract design designed by Amber Hiscott in 1998–99. In September 2010 it was announced that the cathedral would be applying for a £980,000 Heritage Lottery Fund grant to fund a £1.25 million scheme to make the building more attractive to visitors.[8]

The pipe organ by N. P. Mander Ltd. was decommissioned in 1998 with a view to a long-term replacement with another pipe organ. In the interim, a digital organ by Phoenix Organs is being used. In 2008 negotiations were undertaken with Warrington Borough Council to purchase their Cavaillé-Coll organ from the Parr Hall.

The organists are also responsible for direction of the Cathedral Choir.

The cathedral has 13 bells hung for change ringing, including a flat sixth bell.[12] The bells are rung regularly for practice on a Thursday and for Sunday services, both in the morning and the evening. Also hanging in the cathedral is the stainless steel ship's bell from HMS Sheffield.

Sheffield Cathedral has its own stop of the Supertram network called Cathedral. It is one of three stops on all three routes and can be accessed from any other stop on the network.