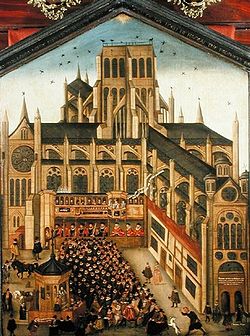 The first 'folkmoot' (or general assembly of the people) known to be held here was by John Mansell, a king's justice, on St Paul's Day in 1236, to announce to them that Henry III wished London to be well-governed and its liberties guarded. The Archbishop of Canterbury and the King attended the next such meeting we know of, in 1259, at which Londoners came to swear their allegiance to the latter and to his heirs (though under duress, as a royal army was holding the city gates at this time). They also gathered here later to swear allegiance to Henry's opponent Simon de Montfort.

A Richard Walker from Worcester, a chaplain, pleaded guilty to sorcery charges here in c.1422 but, after forswearing such practices and being arraigned by the Bishop of Llandaff (then John de la Zouche), he was marched to Cheapside with his 2 magic books open upon him, where the books were burnt and he freed without any other punishment. Reginald Pecock, Bishop of St. Asaph, attacked Lollardy from this cross in 1447 but himself did public penance there in 1457 (by which time he was Bishop of Chichester) before a mob of 20,000 and the Archbishop of Canterbury, throwing various examples of his own heretical writings into a fire. Thomas Netter also preached against Lollardy here. Jane Shore, mistress of King Edward IV was brought before the cross in 1483 and divested "of all her splendour".

File:Joseph Martin Kronheim - Foxe's Book of Martyrs Plate VI - Bradford Appeasing the Riot at St. Paul's Cross.jpg
"Bradford Appeasing the Riot at St. Paul's Cross", from an 1887 edition of Foxe's Book of Martyrs illustrated by Kronheim. According to Foxe, Mr. Bourne, a Catholic bishop and speaker, had nearly driven his Protestant listeners to riot, but Bradford came to his rescue and calmed the mob.[1]

Bishop Thomas Kempe rebuilt the cross in the late 15th century in grand architectural form, as an open-air pulpit of mostly timber with room for 3 or 4 inside it, set on stone steps with a lead-covered roof and a low surrounding wall. From here was preached much of the English Reformation, along with many major events in London's history, with sermons preached here usually printed and thus redistributed to a wider audience. It was a speech here that triggered the 1517 Evil May Day anti-foreigner riots. Ultra-Lutheran Robert Barnes attacked Stephen Gardiner from it, and in 1566 Matthew Hutton, later Archbishop of York, preached here. The first sermon preached here after Catholic Queen Mary's accession (by Bishop Bourne) provoked a riot – a dagger was thrown at Bourne (but missed him, sticking in one of the side posts) and he had to be rushed to safety in St Paul's School. Thus, Mary's successor Elizabeth I kept the pulpit empty for a long time after her accession to keep the people from riot. However, when it finally came to Dr Samson's appearance at the Cross to announce Elizabeth's religious policy, the keys to the Cross's pulpit were found to be mislaid and, when the Lord Mayor ordered the door to be forced, it was found to be too dirty and badly maintained for use on this occasion. However, John Jewel was appointed the Cross's select preacher on 15 June 1559, and on 26 November that year challenged all comers to prove the Roman case out of the Scriptures, or the councils or Fathers for the first six hundred years after Christ. The Puritans destroyed the cross and pulpit in 1643 during the First English Civil War.

Between 1908 and 1910 a new structure was erected near the site of Paul's Cross, from funds provided by the will of the barrister Henry Charles Richards. Richards had hoped that the medieval preaching cross would be reconstructed, but the Dean and Chapter of St Paul's Cathedral decided that this would be out of keeping with the architectural setting, Sir Christopher Wren having rebuilt the cathedral in the 17th century. The resulting monument is to a Baroque revival design by Sir Reginald Blomfield, with a statue of Saint Paul by Sir Bertram Mackennal standing on a Doric column of Portland stone. The cathedral authorities' use of Richards's funds aroused a short-lived controversy.[2] In 1972 the monument was listed at Grade II.[3]