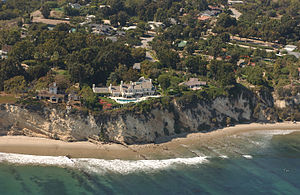 The Streisand effect is the phenomenon whereby an attempt to hide, remove, or censor a piece of information has the unintended consequence of publicizing the information more widely, usually facilitated by the Internet. It is an example of psychological reactance, wherein once people are aware something is being kept from them, their motivation to access the information is increased.[1]

It is named after American entertainer Barbra Streisand, whose 2003 attempt to suppress photographs of her residence in Malibu, California, inadvertently drew further public attention to it. Similar attempts have been made, for example, in cease-and-desist letters to suppress numbers, files, and websites. Instead of being suppressed, the information receives extensive publicity and media extensions such as videos and spoof songs, often being widely mirrored across the Internet or distributed on file-sharing networks.[2][3]

Mike Masnick of Techdirt coined the term in 2005 in relation to a holiday resort issuing a takedown notice to urinal.net (a site dedicated to photographs of urinals) over use of the resort's name.[4]

How long is it going to take before lawyers realize that the simple act of trying to repress something they don't like online is likely to make it so that something that most people would never, ever see (like a photo of a urinal in some random beach resort) is now seen by many more people? Let's call it the Streisand Effect.

The term invoked Barbra Streisand who had unsuccessfully sued photographer Kenneth Adelman and Pictopia.com for violation of privacy.[5] The US$50 million lawsuit endeavored to remove an aerial photograph of Streisand's mansion from the publicly available collection of 12,000 California coastline photographs.[2][6][7] Adelman photographed the beachfront property to document coastal erosion as part of the California Coastal Records Project, which was intended to influence government policymakers.[8][9] Before Streisand filed her lawsuit, "Image 3850" had been downloaded from Adelman's website only six times; two of those downloads were by Streisand's attorneys.[10] As a result of the case, public knowledge of the picture increased substantially; more than 420,000 people visited the site over the following month.[11]

In November 2007, Tunisia blocked access to YouTube and Dailymotion after material was posted of Tunisian political prisoners. Activists and their supporters then started to link the location of then-President Zine el-Abidine Ben Ali's palace on Google Earth to videos about civil liberties in general. The Economist said this "turned a low-key human-rights story into a fashionable global campaign".[12]

The French intelligence agency DCRI's deletion of the French-language Wikipedia article about the military radio station of Pierre-sur-Haute[13] resulted in the article becoming the most viewed page on the French Wikipedia.[14]

A 2013 libel suit by Theodore Katsanevas against a Greek Wikipedia editor resulted in members of the project bringing the story to the attention of journalists.[15]

In April 2007, a group of companies that used Advanced Access Content System (AACS) encryption issued cease-and-desist letters demanding that the system's numerical key be removed from several high-profile websites, including Digg. This led to the key's proliferation across other sites and chat rooms in various formats, with one commentator describing it as having become "the most famous number on the Internet".[16] Within a month, the key had been reprinted on over 280,000 pages, had been printed on T-shirts and tattoos, and had appeared on YouTube in a song played over 45,000 times.[17]

In September 2009, multi-national oil company Trafigura obtained a super-injunction to prevent The Guardian newspaper from reporting on an internal Trafigura investigation into the 2006 Ivory Coast toxic waste dump scandal, and also from reporting on even the existence of the injunction. Using parliamentary privilege, Labour MP Paul Farrelly referred to the super-injunction in a parliamentary question, and on October 12, 2009, The Guardian reported that it had been gagged from reporting on the parliamentary question, in violation of the 1689 Bill of Rights.[18][19] Blogger Richard Wilson correctly identified the blocked question as referring to the Trafigura waste dump scandal, after which The Spectator suggested the same. Not long after, Trafigura began trending on Twitter, helped along by Stephen Fry's retweeting the story to his followers.[20] Twitter users soon tracked down all details of the case, and by October 16, the super-injunction had been lifted and the report published.[21]

In November 2012, Casey Movers, a Boston moving company threatened to sue a woman in Hingham District Court for libel in response to a negative Yelp review. The woman's husband wrote a blog post about the situation, which was then picked up by Techdirt[22] and The Consumerist[23] as well as the Reddit community.[24] By the end of the week, the company was reviewed by the Better Business Bureau, which later revoked its accreditation.[25]

In December 2013, YouTube user ghostlyrich uploaded video proof that his Samsung Galaxy S4 battery had spontaneously caught fire. Samsung had demanded proof before honoring its warranty. Once Samsung learned of the YouTube video, it added additional conditions to its warranty, demanding ghostlyrich delete his YouTube video, promise not to upload similar material, officially absolve the company of all liability, waive his right to bring a lawsuit, and never make the terms of the agreement public. Samsung also demanded that a witness cosign the settlement proposal. When ghostlyrich shared Samsung's settlement proposal online, his original video drew 1.2 million views in one week.[26][27]

In August 2014, it was reported that a guest house in Hudson, New York, had a policy that "there will be a $500 fine that will be deducted from your deposit for every negative review of USGH [Union Street Guest House] placed on any Internet site by anyone in your party and/or attending your wedding or event."[28] The policy had been used in an attempt to suppress an unfavourable November 2013 Yelp review.[29] Thousands of negative reviews of the policy were posted to Yelp and other review sites.[30]

In January 2008, The Church of Scientology's unsuccessful attempts to get Internet websites to delete a video of Tom Cruise speaking about Scientology resulted in the creation of Project Chanology.[31][32][33]

On December 5, 2008, the Internet Watch Foundation (IWF) added the English Wikipedia article about the 1976 Scorpions album Virgin Killer to a child pornography blacklist, considering the album's cover art "a potentially illegal indecent image of a child under the age of 18".[31] The article quickly became one of the most popular pages on the site,[34] and the publicity surrounding the censorship resulted in the image being spread across other sites.[35] The IWF was later reported on the BBC News website to have said "IWF's overriding objective is to minimise the availability of indecent images of children on the internet, however, on this occasion our efforts have had the opposite effect".[36] This effect was also noted by the IWF in its statement about the removal of the URL from the blacklist.[37][38]

In June 2012, Argyll and Bute Council banned a nine-year-old primary school pupil from updating her blog, NeverSeconds, with photos of lunchtime meals served in the school's canteen. The blog, which was already popular, started receiving an immense number of views due to the international media furor that followed the ban. Within days, the council reversed its decision under immense public pressure and scrutiny. After the reversal of the ban, the blog became more popular than it was before.[39]

In April 2016, it was revealed that officials at the University of California, Davis, including Chancellor Linda P.B. Katehi paid consultants at least $175,000 to scrub the internet of stories about Katehi and the administration's involvement in the UC Davis pepper-spray incident. On April 13, 2016, The Sacramento Bee reported that it had obtained UC Davis documents through the California Public Records Act that showed that the university had paid at least $175,000 to public relations companies for work related to the negative image of the university that was circulating on the Internet.[40] A proposal from Maryland company Nevins & Associates that was obtained by the newspaper showed that the company had been hired on a six-month contract that paid $15,000 a month, starting in January 2013.[41] The proposal prepared by Nevins & Associates offered to create an online campaign to clean up the negative attention on the university, and to advise the UC Davis administration in the use of Google platforms to eliminate search results that reflect negatively on the university. The company stated that the overall goal was the "eradication of references to the pepper spray incident in search results on Google for the university and the Chancellor".[41] After the Nevins & Associates contract ended, the university hired Sacramento-based ID Media Partners in an $82,500 contract in 2014 to "design and execute a comprehensive search engine results management strategy" aimed at improving the reputation of the university and Chancellor Katehi.[41] News of the payments brought the event back into the news, adding to negative press in the wake of revelation about Katehi's involvement on outside boards.

In May 2011, Premier League footballer Ryan Giggs sued Twitter after a user revealed that he was the subject of an anonymous privacy injunction (informally referred to as a "super-injunction"[42]) that prevented the publication of details regarding an alleged affair with model and former Big Brother contestant Imogen Thomas. A blogger for the Forbes website observed that the British media, which were banned from breaking the terms of the injunction, had mocked the footballer for not understanding the effect.[43] The Guardian subsequently posted a graph detailing—without naming the player—the number of references to the player's name against time, showing a large spike following the news that the player was seeking legal action.[44]

Another super-injunction in England and Wales banned any mention of Jeremy Clarkson's ex-wife's claims that she had an affair with him after he had remarried.[45][46] Since January 2016 an unnamed celebrity couple (Elton John and David Furnish)[47] have also used an injunction to prevent media in England and Wales reporting events (Furnish having unprotected sex with another gay couple)[48] which have been featured in foreign media and on the internet.[49]

The Streisand effect has been observed in relation to the right to be forgotten, as a litigant attempting to remove information from search engines risks the litigation itself being reported as valid, current news.[50][51]