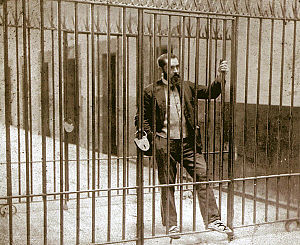 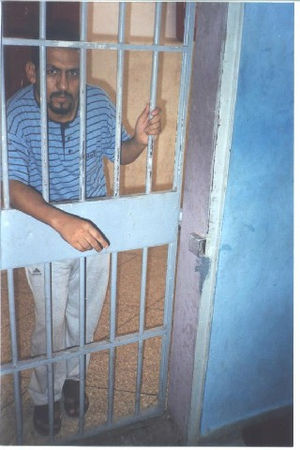 Sahrawi activist Ali Salem Tamek in Ait Melloul prison, Agadir, 2005. He was incarcerated on accusation of "incitement to trouble the public order"

A political prisoner is someone imprisoned because they have opposed or criticized the government responsible.

The term is used by persons or groups challenging the legitimacy of the detention of a prisoner. Supporters of the term define a political prisoner as someone who is imprisoned for his or her participation in political activity. If a political offense was not the official reason for detention, the term would imply that the detention was motivated by the prisoner's politics.

Some understand the term political prisoner narrowly, equating it with the term prisoner of conscience (POC).

Amnesty International campaigns for the release of prisoners of conscience, which include both political prisoners as well as those imprisoned for their religious or philosophical beliefs. To reduce controversy, and as a matter of principle, the organization's policy applies only to prisoners who have not committed or advocated violence. Thus, there are political prisoners who do not fit the narrower criteria for POCs. The organisation defines the differences as follows:[1]

AI uses the term "political prisoner" broadly. It does not use it, as some others do, to imply that all such prisoners have a special status or should be released. It uses the term only to define a category of prisoners for whom AI demands a fair and prompt trial.

"Political" is used by AI to refer to aspects of human relations related to "politics": the mechanisms of society and civil order, the principles, organization, or conduct of government or public affairs, and the relation of all these to questions of language, ethnic origin, sex or religion, status or influence (among other factors).

In AI's use of the term, here are some examples of political prisoners:

Governments often say they have no political prisoners, only prisoners held under the normal criminal law. AI however describes cases like the examples given above as "political" and uses the terms "political trial" and "political imprisonment" when referring to them. But by doing so AI does not oppose the imprisonment, except where it further maintains that the prisoner is a prisoner of conscience, or condemn the trial, except where it concludes that it was unfair.

Parliamentary Assembly of the Council of Europe

The Parliamentary Assembly of the Council of Europe has a much tighter definition:

A person deprived of his or her personal liberty is to be regarded as a ‘political prisoner:

In the parlance of many political movements that utilize armed resistance, guerrilla warfare, and other forms of political violence, a political prisoner includes people who are imprisoned because they are awaiting trial for, or have been convicted of, actions which states they oppose describe as (accurately or otherwise) terrorism. These movements may consider the actions of political prisoners morally justified against some system of governance, may claim innocence, or have varying understandings of what types of violence are morally and ethically justified. For instance, French anarchist groups typically call the former members of Action Directe held in France political prisoners. While the French government deemed Action Directe illegal, the group fashioned itself as an urban guerilla movement, claiming a legitimate armed struggle. In this sense, "political prisoner" can be used to describe any politically active prisoner who is held in custody for a violent action which supporters deem ethically justified.

Some libertarians (such as those who agree with the arguments of Lysander Spooner[3]) also include all convicted for treason and some convicted of espionage in the category of political prisoners. Currently, there is still much controversy and debate around how to define this term and which cases to include or exclude.[4]

Political prisoners are also arrested and tried with a veneer of legality where false criminal charges, manufactured evidence, and unfair trials (kangaroo courts, show trials) are used to disguise the fact that an individual is a political prisoner. This is common in situations which may otherwise be decried nationally and internationally as a human rights violation or suppression of a political dissident. A political prisoner can also be someone that has been denied bail unfairly, denied parole when it would reasonably have been given to a prisoner charged with a comparable crime, or special powers may be invoked by the judiciary. Particularly in this latter situation, whether an individual is regarded as a political prisoner may depend upon subjective political perspective or interpretation of the evidence.[6]