The Bill of Rights is an Act of the Parliament of England that deals with constitutional matters and sets out certain basic civil rights. Passed on 16 December 1689, it is a restatement in statutory form of the Declaration of Right, 1689 presented by the Convention Parliament to William and Mary in February 1689, inviting them to become joint sovereigns of England. The Bill of Rights lays down limits on the powers of the monarch and sets out the rights of Parliament, including the requirement for regular parliaments, free elections, and freedom of speech in Parliament. It sets out certain rights of individuals including the prohibition of cruel and unusual punishment and reestablished the liberty of Protestants to have arms for their defence within the rule of law. Furthermore, the Bill of Rights described and condemned several misdeeds of James II of England.[1]

These ideas reflected those of the political thinker John Locke and they quickly became popular in England.[2] It also sets out—or, in the view of its drafters, restates—certain constitutional requirements of the Crown to seek the consent of the people, as represented in Parliament.

In the United Kingdom, the Bill of Rights is further accompanied by Magna Carta, the Petition of Right, the Habeas Corpus Act 1679 and the Parliament Acts 1911 and 1949 as some of the basic documents of the uncodified British constitution. A separate but similar document, the Claim of Right Act 1689, applies in Scotland. The Bill of Rights 1689 was one of the inspirations for the United States Bill of Rights.

Along with the Act of Settlement 1701, the Bill of Rights is still in effect in all Commonwealth realms. Following the Perth Agreement in 2011, legislation amending both of them came into effect across the Commonwealth realms on 26 March 2015.

During the early modern period, the power of the Parliament of England continually increased. Passage of the Petition of Right in 1628 and Habeas Corpus Act in 1679 established certain liberties for subjects. The idea of a political party took form with groups debating rights to political representation during the Putney Debates of 1647. The English Civil War (1642–1651) was fought between the King and an oligarchic but elected Parliament.[3][4][5]

In the Glorious Revolution of 1688, a group of English Parliamentarians invited the Dutch stadtholder William III of Orange-Nassau (William of Orange) to overthrow King James II of England (James VII of Scotland and James II of Ireland). William's successful invasion with a Dutch fleet and army led to James fleeing to France. In December 1688, William took over the provisional government by appointment of the peers of the realm, as was the legal right of the latter in circumstances when the King was incapacitated, and summoned an assembly of certain members of parliament. This assembly called for an English Convention Parliament to be elected, which convened on 22 January 1689.[6][7] 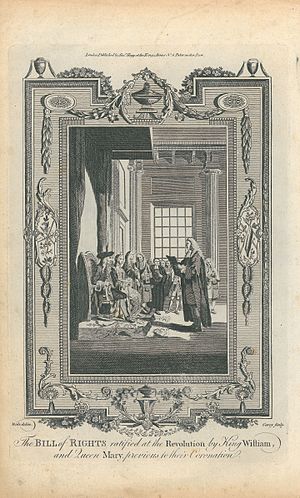 An 18th-century engraving, based on a drawing by Samuel Wale, of the Bill of Rights being presented to William and Mary

The proposal to draw up a statement of rights and liberties and James's violation of them was first made on 29 January 1689 in the House of Commons, with members arguing that the House "cannot answer it to the nation or Prince of Orange till we declare what are the rights invaded" and that William "cannot take it ill if we make conditions to secure ourselves for the future" in order to "do justice to those who sent us hither". On 2 February a committee specially convened reported to the Commons 23 Heads of Grievances, which the Commons approved and added some of their own. However, on 4 February the Commons decided to instruct the committee to differentiate between "such of the general heads, as are introductory of new laws, from those that are declaratory of ancient rights". On 7 February the Commons approved this revised Declaration of Right, and on 8 February instructed the committee to put into a single text the Declaration (with the heads which were "introductory of new laws" removed), the resolution of 28 January and the Lords' proposal for a revised oath of allegiance. It passed the Commons without division.[8]

On 13 February the clerk of the House of Lords read the Declaration of Right, and the Marquess of Halifax, in the name of all the estates of the realm, asked William and Mary to accept the throne. William replied for his wife and himself: "We thankfully accept what you have offered us". They then went in procession to the great gate at Whitehall. The Garter King at Arms proclaimed them King and Queen of England, France and Ireland, whereupon they adjourned to the Chapel Royal, with the Bishop of London preaching the sermon.[9] They were crowned on 11 April, swearing an oath to uphold the laws made by Parliament. The Coronation Oath Act 1688 had provided a new coronation oath, whereby the monarchs were to "solemnly promise and swear to govern the people of this kingdom of England, and the dominions thereunto belonging, according to the statutes in parliament agreed on, and the laws and customs of the same". They were also to maintain the laws of God, the true profession of the Gospel, and the Protestant Reformed faith established by law.[10] This replaced an oath which had deferred more to the monarch. The previous oath required the monarch to rule based on "the laws and customs... granted by the Kings of England".[11]

Provisions of the Act

The Declaration of Right was enacted in an Act of Parliament, the Bill of Rights 1689, in December 1689.[12] The Act asserted "certain ancient rights and liberties" by declaring that:[13]

The Act declared James' flight from England following the Glorious Revolution to be an abdication of the throne. It listed twelve of James's policies by which James designed to "endeavour to subvert and extirpate the Protestant religion, and the laws and liberties of this kingdom".[14] These were:[15]

In a prelude to the Act of Settlement to come twelve years later, the Bill of Rights barred Roman Catholics from the throne of England as "it hath been found by experience that it is inconsistent with the safety and welfare of this Protestant kingdom to be governed by a papist prince"; thus William III and Mary II were named as the successors of James II and that the throne would pass from them first to Mary's heirs, then to her sister, Princess Anne of Denmark and her heirs (and, thereafter, to any heirs of William by a later marriage).

The Bill of Rights is commonly dated in legal contexts to 1688. This convention arises from the legal fiction (prior to the passage of the Acts of Parliament (Commencement) Act 1793) that an Act of Parliament came into force on the first day of the session in which it was passed. The Bill was therefore deemed to be effective from 13 February 1689 (New Style), or, under the Old Style calendar in use at the time, 13 February 1688. Under the Short Titles Act 1896, the Bill was given the official short title of "The Bill of Rights", without a calendar year suffix.[16]

The Bill of Rights was later supplemented by the Act of Settlement 1701 (which was agreed to by the Parliament of Scotland as part of the Treaty of Union). The Act of Settlement altered the line of succession to the throne laid out in the Bill of Rights.[17] However, both the Bill of Rights and the Claim of Right contributed a great deal to the establishment of the concept of parliamentary sovereignty and the curtailment of the powers of the monarch.[18][19][20] Leading, ultimately, to the establishment of constitutional monarchy,[21] while also (along with the penal laws) settling the political and religious turmoil that had convulsed Scotland, England and Ireland in the 17th century.

The Bill of Rights (1689) reinforced the Petition of Right (1628) and the Habaes Corpus Act (1679) by codifying certain rights and liberties. The rights expressed in these Acts became associated with the idea of the rights of Englishmen,[22] and described as Fundamental Laws of England. The Bill of Rights directly influenced the 1776 Virginia Declaration of Rights,[nb 3] which in turn influenced the Declaration of Independence.[23]

Although not a comprehensive statement of civil and political liberties, the Bill of Rights stands as one of the landmark documents in the development of civil liberties in the United Kingdom and a model for later, more general, statements of rights;[11] these include the United States Bill of Rights, the French Declaration of the Rights of Man and of the Citizen, the United Nations Universal Declaration of Human Rights and the European Convention on Human Rights.[24][25] For example, as with the Bill of Rights 1689, the US Constitution prohibits excessive bail and "cruel and unusual punishment". Similarly, "cruel, inhuman or degrading treatment or punishment" is banned under Article 5 of the Universal Declaration of Human Rights and Article 3 of the European Convention on Human Rights.

The Bill of Rights remains in statute and continues to be cited in legal proceedings in the United Kingdom and other Commonwealth realms, particularly Article 9 on parliamentary freedom of speech.[26][27] Following the Perth Agreement in 2011, legislation amending the Bill of Rights and the Act of Settlement 1701 came into effect across the Commonwealth realms on 26 March 2015 which changed the laws of succession to the British throne.[nb 4]

Part of the Bill of Rights remains in statute in the Republic of Ireland.

The Bill of Rights applies in England and Wales; it was enacted in the Kingdom of England which at the time included Wales. Scotland has its own legislation, the Claim of Right Act 1689, passed before the Act of Union between England and Scotland. There are doubts as to whether, or to what extent, the Bill of Rights applies in Northern Ireland.[26][nb 5]

On 21 July 1995 a libel case brought by Neil Hamilton (then a member of parliament) against The Guardian was stopped after Justice May ruled that the Bill of Rights' prohibition on the courts' ability to question parliamentary proceedings would prevent The Guardian from obtaining a fair hearing. Section 13 of the Defamation Act 1996, was subsequently enacted to permit MPs to waive their parliamentary privilege and thus cite their own speeches if relevant to litigation.[30]

Following the United Kingdom European Union membership referendum in 2016, the Bill of Rights was quoted in a court ruling on a legal challenge seeking a judicial declaration that triggering EU exit must first be authorised by an act of Parliament.[31][32]

The ninth article, regarding parliamentary freedom of speech, is actively used in Australia.[26]

The article on parliamentary freedom of speech is in active use in Canada.[26]

The Bill of Rights was invoked in New Zealand in the 1976 case of Fitzgerald v Muldoon and Others,[33] which centred on the purporting of newly appointed Prime Minister Robert Muldoon that he would advise the Governor-General to abolish a superannuation scheme established by the New Zealand Superannuation Act, 1974, without new legislation. Muldoon felt that the dissolution would be immediate and he would later introduce a bill in parliament to retroactively make the abolition legal. This claim was challenged in court and the Chief Justice declared that Muldoon's actions were illegal as they had violated Article 1 of the Bill of Rights, which provides "that the pretended power of dispensing with laws or the execution of laws by regal authority...is illegal."[34]

The Act was retained in the Republic of Ireland although sections were repealed by the Statute Law Revision Act 2007 section 2(2)(a),[35] and Part 2 of Schedule 1.[36] Section 2(3) of that Act repealed:

Two special designs of commemorative two pound coins were issued in the United Kingdom in 1989 to celebrate the tercentenary of the Glorious Revolution. One referred to the Bill of Rights and the other to the Claim of Right. Both depict the Royal Cypher of William and Mary and the mace of the House of Commons, one also shows a representation of the St Edward's Crown and the other the Crown of Scotland.[37]

As part of the Parliament in the Making programme, the Bill of Rights was on display at the Houses of Parliament in February 2015.[39]