From Infogalactic: the planetary knowledge core
Jump to: navigation, search
This name uses Eastern Slavic naming customs; the patronymic is Iosifovna and the family name is Alliluyeva. 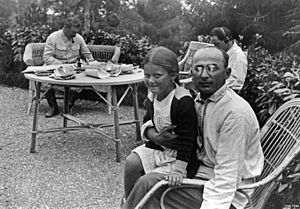 A young Svetlana Alliluyeva sitting on Lavrentiy Beria's lap with Stalin (in background) and Nestor Lakoba.[1]

Svetlana Iosifovna Alliluyeva (Russian: Светла́на Ио́сифовна Аллилу́ева, Georgian: სვეტლანა ალილუევა; 28 February 1926 – 22 November 2011), later known as Lana Peters (Georgian: ლანა პეტერსი), was the youngest child and only daughter of Soviet Premier Joseph Stalin and Nadezhda Alliluyeva, Stalin's second wife. In 1967, she caused an international furor when she defected and became a naturalized citizen of the United States until 1984 when she returned to the Soviet Union and had her Soviet citizenship returned. She later went back to the United States and also spent time in the United Kingdom. At the time of her death she was the last surviving child of Stalin.[2]

Alliluyeva was born on 28 February 1926.[3] Like most children of high-ranking Soviet officials, Alliluyeva was raised by a nanny and only occasionally saw her parents. Her mother, Nadezhda Alliluyeva, died on 9 November 1932. The death was officially ruled as peritonitis resulting from a burst appendix. While there were various other theories as to the cause of her death (murder on the orders of Stalin, or that she was killed by Stalin himself), it appears Nadezhda Alliluyeva committed suicide.[3][4]

On 15 August 1942 Churchill saw her in Stalin's private apartments in the Kremlin describing her as "a handsome red-haired girl, who kissed her father dutifully." Churchill says Stalin "looked at me with a twinkle in his eye as if, so I thought, to convey 'You see, even we Bolsheviks have a family life.'"[5]

At 16, Alliluyeva fell in love with Aleksei Kapler, a Jewish Soviet filmmaker who was 40 years old. Her father vehemently disapproved of the romance. Later, Kapler was sentenced to ten years in exile in the industrial city of Vorkuta, near the Arctic Circle.[6]

At age 17, Alliluyeva received a marriage proposal from Grigory Morozov, a fellow student at Moscow University. Her father grudgingly allowed the couple to marry, although he made a point of never meeting the bridegroom. A son, Iosif, was born in 1945. The couple divorced in 1947 but remained close friends for decades.[3]

Alliluyeva's second marriage was arranged for her to Yuri Zhdanov, the son of Stalin's right-hand-man Andrei Zhdanov and himself one of Stalin's close associates. They were married in 1949. In 1950, Alliluyeva gave birth to a daughter, Yekaterina. The marriage was dissolved soon afterward.[3] In 1963, Alliluyeva lived with an Indian Communist politician named Brajesh Singh. They were not officially married, but they lived together for four years until she left for the United States in 1967 following his death. From 1970–73, she was married to American architect William Wesley Peters (an acolyte of Frank Lloyd Wright), with whom she had a daughter, Olga.[7]

After the death of Stalin

After her father's death in 1953, she worked as a lecturer and translator in Moscow. Her training was in history and political thought, a subject she was forced to study by her father, although her passion was literature and writing.[8] Stalin forbade her to be taught in these subjects. She had also studied four languages since childhood, including German, French, and English, and was fluent in all. She was granted a pension with which she supported herself and her two Russian-born children.[citation needed]

In 1963, while in hospital for the removal of her tonsils, Alliluyeva met Brajesh Singh, an Indian Communist visiting Moscow. The two fell in love. Singh was mild-mannered and highly educated but gravely ill with bronchiectasis and emphysema. The relationship grew deeper and stronger still while the couple were recuperating in Sochi beside the Black Sea. Singh returned to Moscow in 1965 to work as a translator, but he and Alliluyeva were not allowed to marry. The following year, 1966, he died. She was allowed to travel to India to take his ashes to his family to pour into the Ganges. She stayed in the family home in Kalakankar on the banks of the Ganges for three months and became immersed in local customs, leading to her abandonment of atheism. In an interview on 26 April 1967, she referred to Singh as her husband but also stated that they were never allowed to marry officially.[9]

At about nine o’clock p.m. in India, eleven in the morning Washington time, I said, "I have a person here who states she's Stalin's daughter, and we believe she's genuine; unless you instruct me to the contrary, I’m putting her on the one a.m. plane for Rome where we can stop and think the thing through. I’m not giving her any commitment that she can come to the States. I’m only enabling her to leave India, and we will see her to some part of the world—the U.S. or somewhere else—where she can settle in peace. If you disagree with this, let me know before midnight." No comment ever came from Washington. This is one advantage that non-career Ambassadors have; they can go ahead and do unorthodox things without anybody objecting, where a Foreign Service officer might not dare do it. We talked to her and said, "Point number one—are you really sure that you want to leave home? You’ve got a daughter and a son there, and this is a big step to take. Have you really thought it through? You could go back to the Russian embassy right now (she was staying there in their dormitory) and simply go to sleep and forget it, and get up Wednesday morning and on to Moscow, as your schedule calls for." She immediately said, "If this is your decision, I shall go to the press tonight; and announce that (a) democratic India will not take me (they had turned her down prior to her coming) and (b), now democratic America refuses to take me." Well, she didn't need to do it; I was just trying it on for size to be sure she had thought it through. But she was very quick on this.

Alliluyeva accepted. Because the Indian government feared condemnation by the Soviet Union, she was immediately sent from India to Rome. When the flight arrived in Rome,[11] Alliluyeva immediately travelled onward to Geneva, Switzerland, where the government arranged a tourist visa and accommodation for six weeks. She travelled to the United States, leaving her adult children in the USSR. Upon her arrival in April 1967 in New York City, she gave a press conference denouncing her father's legacy and the Soviet government.[12] She intended to publish an autobiographical book Twenty Letters to a Friend on the fiftieth anniversary of the October Revolution.

After living several months in Mill Neck, Long Island under Secret Service protection, Alliluyeva moved to Princeton, New Jersey, where she lectured and wrote, later moving to nearby Pennington.[13][14]

During her years in exile, it is claimed that Svetlana was never happy. Her children who were left behind in the Soviet Union did not maintain contact with her. While Western sources saw a KGB hand behind this,[15] her children claimed that this is because of her complex character.[16] She flirted with various religions.[6] While some claim she had money problems, others argue that her financial situation was good, because of her great popularity. For example, her first book, Twenty Letters to a Friend, caused a worldwide sensation and brought her, as some allege, about 2.5 million dollars.[17][18] In 1970, Alliluyeva answered an invitation from Frank Lloyd Wright's widow, Olgivanna Lloyd Wright, to visit Taliesin West in Scottsdale, Arizona.[19] Alliluyeva described the experience in her autobiographical book Far Away Music. Olgivanna believed in mysticism and had become convinced that Alliluyeva was a spiritual replacement for her own daughter, also named Svetlana. Years previously, Svetlana Wright (Olgivanna's daughter) had married Wright's chief apprentice William Wesley Peters and had died in a car crash. Alliluyeva came to Arizona and, within a matter of months, was engaged to Peters. They married and had a daughter, Olga (born 20 May 1971). William Peters was a member of the Taliesin Fellowship, a group of architects and designers who had been Wright's apprentices and acolytes and had remained dedicated to his work. Alliluyeva took the name Lana Peters, became part of the Fellowship community, and migrated back and forth and with them between the Scottsdale and Taliesin studios near Spring Green, Wisconsin.

By her own account, Alliluyeva retained respect and affection for Wes Peters, but their marriage dissolved both under the pressure of Mrs. Wright's influence and because of Svetlana's inability to adjust to the Taliesin cult-like lifestyle, which she compared to life in the Soviet Union under her father. In 1978 Alliluyeva became a US citizen.[20] In 1982, Alliluyeva moved with her daughter to Cambridge, England. In 1984, she returned to the Soviet Union, where she and her daughter were granted citizenship.

Alliluyeva, for the most part, lived her later years of life in southern Wisconsin, either in Richland Center or Spring Green. She first came to Wisconsin with Wes Peters and the rest of the Fellowship, and while she had lived elsewhere, sometimes for extended periods, she always returned. She moved to Richland Center from Spring Green during the period of 2007–2011, where she died.

Alliluyeva died on 22 November 2011 from complications arising from colon cancer in Richland Center,[3][21] where she had spent time while visiting from Cambridge in England.[22][23] Alliluyeva's daughter Olga now goes by the name Chrese Evans and lives in Portland, Oregon.[24]

Alliluyeva was baptised into the Russian Orthodox Church on 20 March 1963. During her years of exile, she flirted with various religions. She then turned to the Greek Orthodox church and is also reported to have thought of becoming a nun.[6]

In 1967, Alliluyeva found herself spending time with Roman Catholics in Switzerland and encountered many denominations during her time in the US. She received a letter from Father Garbolino, an Italian Catholic priest from Pennsylvania, inviting her to make a pilgrimage to Fátima, in Portugal, on the occasion of the 70th anniversary of the famous apparitions there. In 1969 Garbolino, who was in New Jersey, came to visit Alliluyeva at Princeton. In California, she lived with Catholics, Rose and Michael Ginciracusa, for two years, from 1976. She read books by authors such as Raissa Maritain. In Cambridge, England, in December 1982, on the feast of Santa Lucia, Advent, Alliluyeva converted to the Roman Catholic Church.[25]