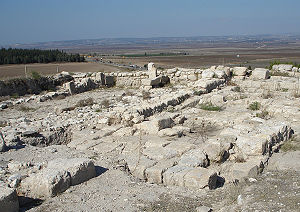 Megiddo (Hebrew: מגידו‎; Arabic: مجیدو‎‎, Tell al-Mutesellim, "The Tell of the Governor") is a tell in northern Israel near Kibbutz Megiddo, about 30 km south-east of Haifa, known for its historical, geographical, and theological importance, especially under its Greek name Armageddon. In ancient times Megiddo was an important city-state. Excavations have unearthed 26 layers of ruins, indicating a long period of settlement. Megiddo is strategically located at the head of a pass through the Carmel Ridge overlooking the Jezreel Valley from the west.

The site is now protected as Megiddo National Park and is a World Heritage Site.

Megiddo is also known as Greek: Μεγιδδώ/Μαγεδδών, Megiddó/Mageddón in the Septuagint; Latin: Mageddo; Assyrian: Magiddu, Magaddu; Magidda and Makida in the Amarna tablets; Egyptian: Maketi, Makitu, and Makedo. The Book of Revelation mentions an apocalyptic battle at Armageddon,[1] a name derived from the Hebrew "Har Megiddo" meaning "Mount of Megiddo". "Armageddon" has become a byword for the end of the world.

Megiddo was a site of great importance in the ancient world. It guarded the western branch of a narrow pass and trade route connecting Egypt and Assyria. Because of its strategic location, Megiddo was the site of several historical battles. The site was inhabited from approximately 7000 BCE to 586 BCE though the first significant remains date to the Chalcolithic period (4500–3500 BCE). Megiddo's Early Bronze Age I (3500–3100 BCE) temple has been described by its excavators as "the most monumental single edifice so far uncovered in the EB I Levant and ranks among the largest structures of its time in the Near East."[2] The first wall was constructed in the Early Bronze Age II or III period.

However, the town experienced a decline in the Early Bronze-Age IV period (2300–2000 BCE), but the city was somewhat revived around 2000 BCE. Following massive construction, the town reached its largest size in the Middle Bronze-Age, at 10–12 hectares. Though the city was subjugated by Thutmose III, it still prospered, and a massive and incredibly elaborate palace was constructed in the Late Bronze Age. The city was destroyed around 1150 BCE, and the area was resettled by what some scholars have identified as early Israelites, before being replaced with an unwalled Philistine town. When the Israelites captured it, though, it became an important city, before being destroyed, possibly by Aramaean raiders, and rebuilt, this time as an administrative center for Tiglath-Pileser III's occupation of Samaria. However, its importance soon dwindled, and it was finally abandoned around 586 BCE.[3] Since that time it has remained uninhabited, preserving ruins pre-dating 586 BCE without settlements ever disturbing them. Instead, the town of Lajjun (not to be confused with the el-Lajjun archaeological site in Jordan) was built up near to the site, but without inhabiting or disturbing its remains.

Megiddo is mentioned in Ancient Egyptian writings because one of Egypt's mighty kings, Thutmose III, waged war upon the city in 1478 BCE. The battle is described in detail in the hieroglyphics found on the walls of his temple in Upper Egypt.

Mentioned in the Bible as "Derekh HaYam" or "Way of the Sea," it became an important military artery of the Roman Empire and was known as the Via Maris. 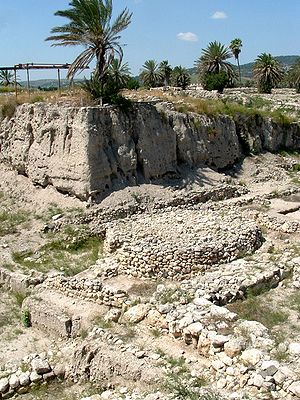 Kibbutz Megiddo is nearby, less than 1 kilometre (0.62 mi) to the south. Today, Megiddo Junction is on the main road connecting the center of Israel with lower Galilee and the north. It lies at the northern entrance to Wadi Ara, an important mountain pass connecting the Jezreel Valley with Israel's coastal plain.[4]

In 1964, during Pope Paul VI's visit to the Holy Land, Megiddo was the site where he met with Israeli dignitaries, including Israeli President Zalman Shazar and Prime Minister Levi Eshkol.[5]

Megiddo has been excavated three times and is currently being excavated yet again. The first excavations were carried out between 1903 and 1905 by Gottlieb Schumacher for the German Society for the Study of Palestine.[6] Techniques used were rudimentary by later standards and Schumacher's field notes and records were destroyed in World War I before being published. After the war, Carl Watzinger published the remaining available data from the dig.[7] 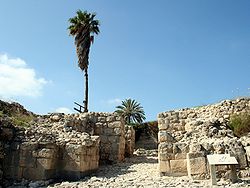 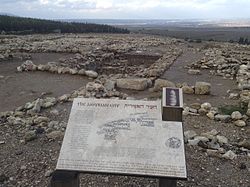 In 1925, digging was resumed by the Oriental Institute of the University of Chicago, financed by John D. Rockefeller, Jr., continuing until the outbreak of the Second World War. The work was led initially by Clarence S. Fisher, and later by P. L. O. Guy, Robert Lamon, and Gordon Loud.[8][9][10][11][12][13] The Oriental Institute intended to completely excavate the whole tel, layer by layer, but money ran out before they could do so. Today excavators limit themselves to a square or a trench on the basis that they must leave something for future archaeologists with better techniques and methods. During these excavations it was discovered that there were around 8 levels of habitation, and many of the uncovered remains are preserved at the Rockefeller Museum in Jerusalem and the Oriental Institute of Chicago.

Yigael Yadin conducted excavations in 1960, 1966, 1967, and 1971 for the Hebrew University.[14][15] The formal results of those digs have not yet been published, though in 2005 a grant was issued by the Shelby White – Leon Levy Program for Archaeological Publications to produce an expedition final report.

Megiddo has most recently (since 1994) been the subject of biannual excavation campaigns conducted by the Megiddo Expedition of Tel Aviv University, currently co-directed by Israel Finkelstein and David Ussishkin, with Eric H. Cline of The George Washington University serving as Associate Director (USA), together with a consortium of international universities.[16][17] One notable feature of the dig is close on-site co-operation between archaeologists and specialist scientists, with detailed chemical analysis being performed at the dig itself using a field infrared spectrometer.[18]

In 2010, the Jezreel Valley Regional Project, directed by Matthew J. Adams of Bucknell University in cooperation with the Megiddo Expedition, undertook excavations of the eastern extension of the Early Bronze Age town of Megiddo, at the site known as Tel Megiddo (East).[19][20] 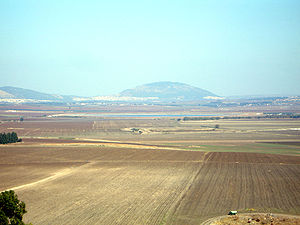 View of Jezreel Valley and Mount Tabor from Megiddo

A path leads up through a Solomonic gateway overlooking the excavations of the Oriental Institute. A solid circular stone structure has been interpreted as an altar or a high place from the Canaanite period. Further on is a grain pit from the Israelite period for storing provisions in case of siege; the stables, originally thought to date from the time of Solomon but now dated a century and a half later to the time of Ahab; and a water system consisting of a square shaft 35 metres (115 ft) deep, the bottom of which opens into a tunnel bored through rock for 100 metres (330 ft) to a pool of water.

In 2010, a collection of jewelry pieces was found in a ceramic jug [21][22] The jewelry dates to around 1100 BCE[23] The collection includes beads made of carnelian stone, a ring and earrings. The jug was subjected to molecular analysis to determine the contents. The collection was probably owned by a wealthy Canaanite family, likely belonging to the ruling elite.[24]

The Megiddo ivories are thin carvings in ivory found at Tel Megiddo, the majority excavated by Gordon Loud. The ivories are on display at the Oriental Institute of Chicago and the Rockefeller Museum in Jerusalem. They were found in the stratum VIIA, or Late Bronze Age layer of the site. Carved from hippopotamus incisors from the Nile, they show Egyptian stylistic influence. An ivory pen case was found inscribed with the cartouche of Ramses III. 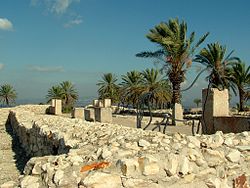 At Megiddo two stable complexes were excavated from Stratum IVA, one in the north and one in the south. The southern complex contained five structures built around a lime paved courtyard. The buildings themselves were divided into three sections. Two long stone paved aisles were built adjacent to a main corridor paved with lime. The buildings were about twenty-one meters long by eleven meters wide. Separating the main corridor from outside aisles was a series of stone pillars. Holes were bored into many of these pillars so that horses could be tied to them. Also, the remains of stone mangers were found in the buildings. These mangers were placed between the pillars to feed the horses. It is suggested that each side could hold fifteen horses, giving each building an overall capacity of thirty horses. The buildings on the northern side of the city were similar in their construction. However, there was no central courtyard. The capacity of the northern buildings was about three hundred horses altogether. Both complexes could hold from 450–480 horses combined.

The buildings were found during excavations between 1927 and 1934. The head excavator originally interpreted the buildings as stables. Since then his conclusions have been challenged by James Pritchard, Dr Adrian Curtis of Manchester University Ze'ev Herzog, and Yohanan Aharoni, who suggest they were storehouses, marketplaces or barracks.[25]

In 2005, Israeli archaeologist Yotam Tepper of Tel-Aviv University discovered the remains of a church, believed to be from the third century, a few hundred meters south of the Tel on the grounds of the Megiddo Prison. Among the finds is an approx. 54-square-metre (580 sq ft) large mosaic with a Greek inscription stating that the church is consecrated to "the God Jesus Christ." It is speculated that this may be the oldest remains of a church in the Holy Land.[26] 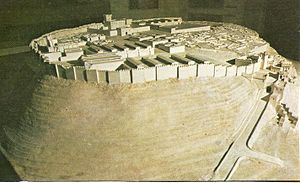 Tel Megiddo is twinned with: