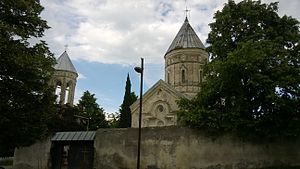 The Tetri Giorgi Church near Alaverdi church in Georgia. 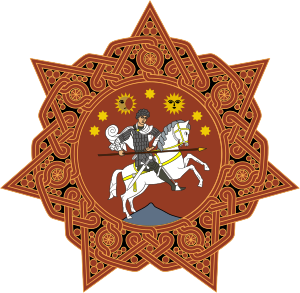 Tetri Giorgi (Georgian: თეთრი გიორგი, "White George") is one of the local names of Christian Saint George in Georgia, specifically in the country’s northeastern highland districts. The popularity of the cult led to establishment of Tetri Giorgi as a national symbol, part of Georgia's coat of arms in the years 1918-1921 and 1991-2004. The name of Tetri Giorgi has also been adopted by several political and non-political organizations, significantly by an anti-Soviet Georgian émigré group in Europe and a 1990s paramilitary unit.

The cult of Tetri Giorgi is syncretic, being a combination of the Christian patron saint of Georgia and a pagan moon deity, which, in Georgian folk tradition, represents the male principle.[1] The Tetri Giorgi holiday ("tetrigiorgoba") was once marked annually on August 14, when many pilgrims from the eastern Georgian provinces attended an overnight feast at the saint's chief shrine – a 14th-century Orthodox Christian church overlooking the village Atsquri in what is now Akhmeta Municipality, Kakheti.[2]

In May 1918, the Democratic Republic of Georgia – newly independent from the Russian Empire – chose the equestrian depiction of Tetri Giorgi as a centerpiece of its coat of arms. But the image was rendered more secular as its Christian symbolism was disfavored by Georgia's Social-Democratic government, recalls Revaz Gabashvili, a critic of the contemporary Georgian government.[3] This coat of arms was in use until the Soviet takeover in 1921 and again in post-Soviet Georgia from 1991 to 2004.