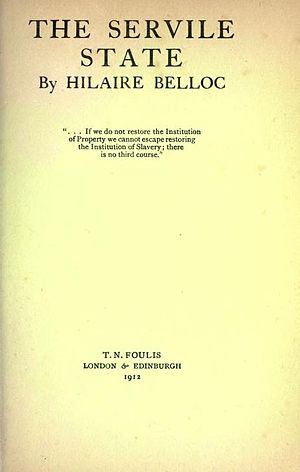 A copy of the original issuing of The Servile State, first published in 1912 by London & Edinburgh: T.N. Foulis.

The Servile State is a book written by Hilaire Belloc in 1912 about economics. Although it mentions distributism, for which he and his friend G. K. Chesterton are famous,[1] it avoids explicit advocacy of that economic system.[citation needed]

This book lays out, in very broad outline, Belloc's version of European economic history, starting with ancient pagan states, in which slavery was critical to the economy, through the medieval Christendom process which transformed an economy based on serf labour in a state in which the property was well distributed, to 19th and 20th century capitalism.[citation needed] Belloc argues that the development of capitalism was not a natural consequence of the Industrial Revolution, but a consequence of the earlier dissolution of the monasteries in England, which then shaped the course of English industrialisation. English capitalism then spread across the world.

Belloc then makes his case for the natural instability of pure capitalism and discusses how he believes that attempts to reform capitalism will lead almost inexorably to an economy in which state regulation has removed the freedom of capitalism and thereby replaced capitalism with the Servile State, which shares with ancient slavery the fact that positive law (as opposed to custom or economic necessity by themselves) dictates that certain people will work for others, who likewise must take care of them.[citation needed]

In the ninth section of the book, titled "The Servile State Has Begun," Belloc explores various ways the servile state has started to creep its way back into modern life. Among these he includes minimum wage laws, employers liability laws, the Insurance Act, and compulsory arbitration.[2] Belloc defines servile laws as those that establish "distinction between two classes of citizens, marking off the one as legally distinct from the other by a criterion of manual labor or income."

Belloc used his Catholicism and his experience of living alongside the small-scale peasant farmers of the Sussex Weald to advocate his thesis of having a property-owning democracy based on peasant smallholdings that would bring together the different social classes.[3]

George Orwell described the work as written in a "tiresome style" and argued that the remedy it suggested was "impossible". However, he considered that it foretold the sorts of things that were happening in the 1930s with "remarkable insight".[4] Kenneth Minogue's book The Servile Mind[5] was inspired by Belloc's book. Minogue described Belloc's book as somewhat dated but still offering valuable insights into the development of servility and dependence on government largesse, which Minogue tended to regard unfavorably. Austrian School economist Friedrich von Hayek praised the truth of Belloc's predictions in his book The Road to Serfdom[6] and subtitled his chapter, "Economic Control and Totalitarianism", with the quote from The Servile State, "the control of the production of wealth is the control of human life itself."