From Infogalactic: the planetary knowledge core
Jump to: navigation, search
For other uses, see Proletariat (disambiguation).

The proletariat (/ˌproʊlɪˈtɛəriːət/ from Latin proletarius) is a term for the class of wage-earners (especially industrial workers), in a capitalist society, whose only possession of significant material value is their labor-power (their ability to work);[1] a member of such a class is a proletarian.

Usage in the Constitution of the Roman Republic

The proletarii constituted a social class of Roman citizens owning little or no property. The origin of the name is presumably linked with the census, which Roman authorities conducted every five years to produce a register of citizens and their property from which their military duties and voting privileges could be determined. For citizens with property valued 11,000 asses or less, which was below the lowest census for military service, their children—proles (from Latin prōlēs, "offspring")—were listed instead of their property; hence, the name proletarius, "the one who produces offspring". The only contribution of a proletarius to the Roman society was seen in his ability to raise children, the future Roman citizens who can colonize new territories conquered by the Roman Republic and later by the Roman Empire. The citizens who had no property of significance were called capite censi because they were "persons registered not as to their property...but simply as to their existence as living individuals, primarily as heads (caput) of a family."[2][3] 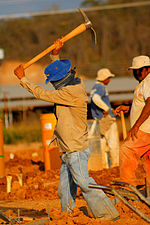 A manual laborer at work in Venezuela. Manual laborers are generally considered to be part of the proletariat.

Although included in one of the five support centuriae of the Comitia Centuriata, proletarii were largely deprived of their voting rights due to their low social status caused by their lack of "even the minimum property required for the lowest class"[4] and a class-based hierarchy of the Comitia Centuriata. The late Roman historians, such as Livy, not without some uncertainty, understood the Comitia Centuriata to be one of three forms of popular assembly of early Rome composed of centuriae, the voting units whose members represented a class of citizens according to the value of their property. This assembly, which usually met on the Campus Martius to discuss public policy issues, was also used as a means of designating military duties demanded of Roman citizens.[5] One of reconstructions of the Comitia Centuriata features 18 centuriae of cavalry, and 170 centuriae of infantry divided into five classes by wealth, plus 5 centuriae of support personnel called adsidui. The top infantry class assembled with full arms and armor; the next two classes brought arms and armor, but less and lesser; the fourth class only spears; the fifth slings. In voting, the cavalry and top infantry class were enough to decide an issue; as voting started at the top, an issue might be decided before the lower classes voted.[6] In the last centuries of the Roman Republic (509-44 B.C.), the Comitia Centuriata became impotent as a political body, which further eroded already minuscule political power the proletarii might have had in the Roman society.

Following a series of wars the Roman Republic engaged since the closing of the Second Punic War (218–201), such as the Jugurthine War and conflicts in Macedonia and Asia, the significant reduction in the number of Roman family farmers had resulted in the shortage of people whose property qualified them to perform the citizenry's military duty to Rome.[7] As a result of the Marian reforms initiated in 107 B.C. by the Roman general Gaius Marius (157–86), the proletarii became the backbone of the Roman Army.[8]

Karl Marx, who studied Roman law at the University of Berlin,[9] used the term proletariat in his socio-political theory of Marxism to describe a working class unadulterated by private property and capable of a revolutionary action to topple capitalism in order to create classless society.

The term proletariat is used in Marxist theory to name the social class that does not have ownership of the means of production and whose only means of subsistence is to sell their labor power[10] for a wage or salary. Proletarians are wage-workers, while some refer to those who receive salaries as the salariat. For Marx, however, wage labor may involve getting a salary rather than a wage per se. Marxism sees the proletariat and bourgeoisie (capitalist class) as occupying conflicting positions, since workers automatically wish their wages to be as high as possible, while owners and their proxies wish for wages (costs) to be as low as possible. 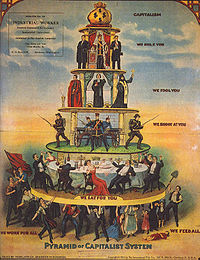 A 1911 Industrial Worker publication advocating industrial unionism based on a critique of capitalism. The proletariat "work for all" and "feed all".

In Marxist theory, the borders between the proletariat and some layers of the petite bourgeoisie, who rely primarily but not exclusively on self-employment at an income no different from an ordinary wage or below it – and the lumpen proletariat, who are not in legal employment – are not necessarily well defined. Intermediate positions are possible, where some wage-labor for an employer combines with self-employment. While the class to which each individual person belongs is often hard to determine, from the standpoint of society as a whole, taken in its movement (i.e. history), the class divisions are incontestable; the easiest proof of their existence is the class struggle – strikes, for instance. While an employee may be subjectively unsure of his class belonging, when his workmates come out on strike he is objectively forced to follow one class (his workmates, i.e. the proletariat) over the other (management, i.e. the bourgeoisie). Marx makes a clear distinction between proletariat as salaried workers, which he sees as a progressive class, and Lumpenproletariat, "rag-proletariat", the poorest and outcasts of the society, such as beggars, tricksters, entertainers, buskers, criminals and prostitutes, which he considers a retrograde class.[11][12] Socialist parties have often struggled over the question of whether they should seek to organize and represent all the lower classes, or just the wage-earning proletariat.

One part of the wealth produced is used to pay the workers' wages (variable costs), another part to renew the means of production (constant costs) while the third part, surplus value is split between the capitalist's private takings (profit), and the money used to pay rents, taxes, interests, etc. Surplus value is the difference between the wealth that the proletariat produces through its work, and the wealth it consumes to survive and to provide labor to the capitalist companies.[13] A part of the surplus value is used to renew or increase the means of production, either in quantity or quality (i.e., it is turned into capital), and is called capitalized surplus value.[14] What remains is consumed by the capitalist class.

The commodities that proletarians produce and capitalists sell are valued for the amount of labor embodied in them. The same goes for the workers' labor power itself: it is valued, not for the amount of wealth it produces, but for the amount of labor necessary to produce and reproduce it. Thus the capitalists earn wealth from the labor of their employees, not as a function of their personal contribution to the productive process, which may even be null, but as a function of the juridical relation of property to the means of production. Marxists argue that new wealth is created through labor applied to natural resources.[15]

Prole drift, short for proletarian drift, is a term that suggests the tendency in advanced industrialized societies for everything inexorably to become proletarianized, or to become commonplace. This trend is attributed to mass production, mass selling, mass communication and mass education. Examples include best-seller lists, films and music that must appeal to the masses and shopping malls.[17]