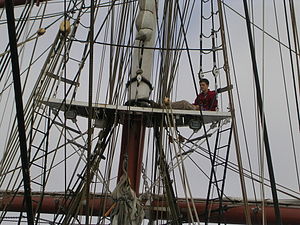 The foretop of the Prince William. Note the futtock shrouds (white-painted rods angling inwards) and jacob's ladders; extending upwards are the topmast shrouds with their rope ratlines.

The Top on a traditional square rigged ship, is the platform at the upper end of each (lower) mast.[1] This is not the masthead "crow's nest" of the popular imagination – above the mainmast (for example) is the main-topmast, main-topgallant-mast and main-royal-mast, so that the top is actually about 1/4 to 1/3 of the way up the mast as a whole. 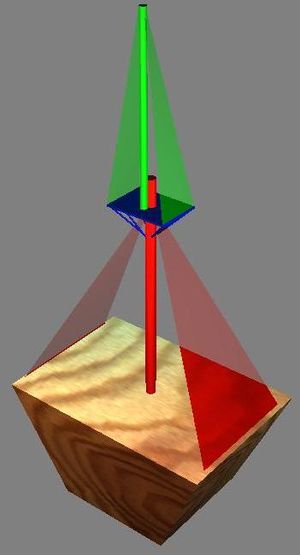 Diagram of a mast & shrouds (red), top with futtock shrouds (blue), and topmast and its shrouds (green). Shrouds are represented as translucent panels; in reality they would consist of many individual lines.

The main purpose of the top is to anchor the shrouds of the topmast that extends above it. Shrouds down to the side of the hull would be at too acute an angle from the mast, so struts running out from the mast are added to take the place of the hull for a smaller copy (the topmast) of the lower mast and its rigging. Placing a few timbers between these struts produces a useful platform, the top. The futtock shrouds carry the load of the upper shrouds into the mast below.

At the upper end of the topmast and topgallant, there is a similar situation regarding the next mast up (topgallant and royal respectively). At these points a smaller top might be constructed, but it is more usual simply to leave the shroud-bearing struts open, in which case they are known as crosstrees.

Access for sailors to the top may be by a Jacob's ladder, lubber's hole, or the futtock shrouds.

A fighting top was an enlarged top with swivel guns, designed to fire down at the deck of enemy ships. They could also be manned by snipers armed with muskets or rifles; Horatio Nelson was killed at the Battle of Trafalgar by a sniper firing from a fighting top of the Redoutable.