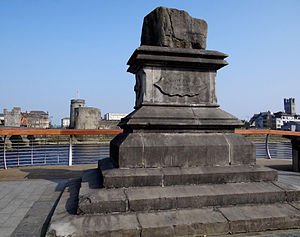 The Treaty Stone on which the Treaty of Limerick may have been signed.

The Treaty of Limerick (Irish: Conradh Luimnigh) ended the Williamite War in Ireland between the Jacobites and the supporters of William of Orange and concluded the Siege of Limerick. The treaty really consisted of two treaties, both of which were signed on 3 October 1691. Reputedly they were signed on the Treaty Stone, an irregular block of limestone which once served as a mounting block for horses. This stone is now displayed on a pedestal in Limerick, put there to prevent souvenir hunters from taking pieces of it.[1] Because of the treaty, Limerick is sometimes known as the Treaty City.[2][3]

After his victory at the Battle of Boyne in July 1689, William III had issued the Declaration of Finglas which offered a pardon to Jacobite soldiers but excluded their senior officers from its provisions. This encouraged the Jacobite leaders to continue fighting and they won a major victory during the 1690 Siege of Limerick. However, defeats the following year at the Battle of Aughrim and the second siege of Limerick left the Williamites victorious. Nonetheless the terms they offered to Jacobite leaders at Limerick were considerably more generous than those a year earlier at Finglas.

These articles dealt with the treatment of the disbanded Jacobite army. Under the treaty, Jacobite soldiers in formed regiments had the option to leave with their arms and flags for France to continue serving under James II in the Irish Brigade. Some 14,000 Jacobites chose this option and were marched south to Cork where they embarked on ships for France, many of them accompanied by their wives and children. Individual soldiers wanting to join the French, Spanish or Austrian armies also emigrated in what became known as the Flight of the Wild Geese.

This treaty had twenty-nine articles, which were agreed upon between Lieutenant-General Ginkle, Commander-in-Chief of the English army, and the Lieutenant-Generals D'Usson and de Tessé, Commanders-in-Chief of the Irish army. The articles were signed by D'Usson, Le Chevalier de Tesse, Latour Montfort, Patrick Sarsfield (Earl of Lucan), Colonel Nicholas Purcell of Loughmoe, Mark Talbot, and Piers, Viscount Galmoy.

These articles protected the rights of the defeated Jacobite landed gentry who chose to remain in Ireland, most of whom were Catholics. Their property was not to be confiscated so long as they swore allegiance to William and Mary, and Catholic noblemen were to be allowed to bear arms. William required peace in Ireland and was allied to the Papacy in 1691 within the League of Augsburg.

It has been said that "the ink was not dry on the Treaty" before the English broke it—the civil articles were not honoured by the victorious Williamite government.[4] The few Catholic landowners who took the oath in 1691-93 remained protected, including their descendants. Those who did not were known as "non-jurors", and their loyalty to the new regime was automatically suspect. The Papacy again recognized James II as the lawful king of Ireland from 1693. Some managed to have an outlawry specifically reversed, such as the 8th Viscount Dillon in 1694. Starting in 1695, a series of harsh penal laws were enacted by the Parliament of Ireland to make it difficult for the Irish Catholic gentry who had not taken the oath by 1695 to remain Catholic. The laws were extended for political reasons by the Dublin administration during the War of the Spanish Succession (1701–14), and reforms did not start until the 1770s.

It is often thought that Limerick was the only treaty between Jacobites and Williamites. A similar treaty had been signed on the surrender of Galway on 22 July 1691, but without the strict loyalty oath required under the Treaty of Limerick. The Galway garrison had been organised by the landed gentry of counties Galway and Mayo, who benefited from their property guarantees in the following century. The Limerick treaty marked the end of the war.

In the following 8 years further confiscations were made from the continuing adherents to the Jacobite cause, and also further pardons were granted. The Commissioners of Forfeitures reported to the Irish House of Commons in December 1699 as follows:[5][6]