The Viking Age sword (also Viking sword) or Carolingian sword is the type of sword prevalent in Western and Northern Europe during the Early Middle Ages.

The Viking Age or Carolingian-era developed in the 8th century from the Merovingian sword (more specifically, the Frankish production of swords in the 6th to 7th century, itself derived from the Roman spatha) and during the 11th to 12th century in turn gave rise to the knightly sword of the Romanesque period.[5] 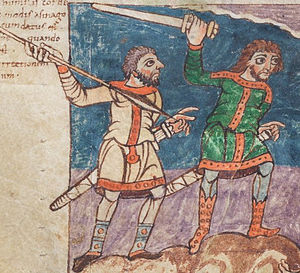 Although popularly called "Viking sword", this type of sword was produced in the Frankish Empire during the Carolingian era. The association of the name "Viking" with these swords is due to the disappearance of grave goods in Christian Francia in the 8th century, due to which the bulk of sword blades of Frankish manufacture of this period were found in pagan burials of Viking Age Scandinavia, imported by trade, ransom payment or looting, while continental European finds are mostly limited to stray finds in riverbeds.[6]

Swords of the 8th to 10th centuries are also termed "Carolingian swords",[7] while swords of the late Viking Age and the beginning High Middle Ages (late 10th to early 12th centuries) blend into the category of Norman swords or the early development of the knightly sword. 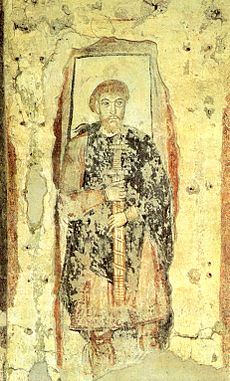 Depiction of a Carolingian sword with scabbard (donor portrait in the St. Benedikt in Mals, South Tyrol, early 9th century)

During the reign of Charlemagne, the price of a sword (a spata, or longsword) with scabbard was set at seven solidi (Lex Ribuaria). Swords were still comparatively costly weapons, although not as exclusive as during the Merovingian period, and in Charlemagne's capitularies, only members of the cavalry, who could afford to own and maintain a warhorse, were required to be equipped with swords. Regino's Chronicle suggests that by the end of the 9th century, the sword was seen as the principal weapon of the cavalry.

The sword gradually replaced the sax during the late 8th to early 9th century. Because grave goods were no longer deposited in Francia in the 8th century, continental finds are mostly limited to stray finds in riverbeds (where anaerobic conditions favoured the preservation of the steel), and most extant examples of Carolingian swords are from graves from northern or eastern cultures where pagan burial customs were still in effect.

Pattern welding fell out of use in the 9th century, as higher quality steel became available. Better steel also allowed the production of narrower blades, and the swords of the 9th century have more pronounced tapering than their 8th-century predecessors, shifting the point of balance towards the hilt. Coupland (1990) proposes that this development may have accelerated the disappearance of the sax, as the sword was now available for swift striking, while the migration-period spatha was mostly used to deliver heavy blows aimed at damaging shields or armour. The improved morphology combined maneuverability and weight in a single weapon, rendering the sax redundant.[8]

The Frankish swords often had pommels shaped in a series of three or five rounded lobes. This was a native Frankish development which did not exist prior to the 8th century, and the design is frequently represented in the pictorial art of the period, e.g. in the Stuttgart Psalter, Utrecht Psalter, Lothar Gospels and Bern Psychomachia manuscripts, as well as in the wall frescoes in the church in Mals, South Tyrol. Likewise, the custom of inlaid inscriptions in the blades is Frankish innovation dating to the reign of Charlemagne, notably in the Ulfberht group of blades, but continued into the high medieval period and peaking in popularity in the 12th century. While blade inscriptions become more common over the Viking Age, the custom of hilt decorations in precious metals, inherited from the Merovingian sword and widespread during the 8th and 9th centuries, is in decline over the course of the 10th century. Most swords made in the later 10th century in what was now the Holy Roman Empire, while still conforming to the "Viking sword" type morphologically, have plain steel hilts.[9]

There are very few references to Carolingian-era sword production, apart from a reference to emundatores vel politores present in the workshops of the Abbey of Saint Gall.[10] Two men sharpening swords, one using a grindstone the other a file, are shown in the Utrecht Psalter (fol. 35v).

The distribution of Frankish blades throughout Scandinavia and as far east as Volga Bulgaria attest to the considerable importance of Frankish arms exports, even though Carolingian kings attempted to prevent the export of weapons to potential enemies; in 864, Charles the Bald set the death penalty on selling weapons to the Vikings.[11] Ibn Fadlan in the 10th century notes explicitly that the Volga Vikings carried Frankish swords.[12] The Saracens raiding Camargue in 869 demanded 150 swords as ransom for archbishop Rotland of Arles.

Carolingian scabbards were made of wood and leather. Scabbard decorations are depicted in several manuscripts (Stuttgart Psalter, Utrecht Psalter, Vivian Bible). A number of miniatures also show the system of suspension of the sword by means of the sword-belt. While the scabbards and belts themselves are almost never preserved, their metal mounts have been found in Scandinavian silver hoards and in Croatian graves.[13] A complete set seems to have included two to three oval or half-oval mounts, one large strap-end, a belt buckle and a trefoil mount. Their arrangement on the sword-belt has been reconstructed by Menghin (1973).[14] 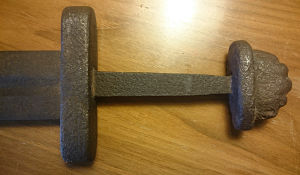 Hilt of a Frankish sword of ca. the 10th century, with characteristically lobed pommel.[15]

The seminal study of the topic is due to Jan Petersen (De Norske Vikingsverd, 1919).

Petersen introduced a morphological typology, mostly based on hilt shape. Petersen's types are identified by capital letters A–Z. Petersen listed a total of 110 specimens found in Norway. Of these, 40 were double-edged, 67 were single-edged and 3 indeterminate.

R. E. M. Wheeler in 1927 introduced a typology combining Petersen's hilt typology with a blade typology, in nine types labelled I to IX.

Geibig (1991) introduced an additional typology based on blade morphology (types 1–14) and a typology of pommel shapes (types 1–17, with subtypes), focussing on swords of the 8th to 12th centuries found within the boundaries of East Francia (as such including the transitional types between the "Viking" and the "knightly" sword).

The Oakeshott typology is a continuation of Wheeler's typology to include high medieval swords.

An important aspect in the development of the European sword between the early and high medieval periods is the availability of high-quality steel. Migration period as well as early medieval sword blades were primarily produced by the technique of pattern welding, also known as "false Damascus" steel. Blooms of high-quality steel large enough to produce an entire sword blade were only rarely available in Europe at the time, mostly via import from Central Asia, where a crucible steel industry began to establish itself from c. the 8th century. Higher quality swords made after AD 1000 are increasingly likely to have crucible steel blades. The group of Ulfberht swords includes a wide spectrum of steel and production method. One example from a 10th-century grave in Nemilany, Moravia, has a pattern-welded core with welded-on hardened cutting edges. Another example appears to have been made from high-quality hypoeutectoid steel possibly imported from Central Asia.[17] 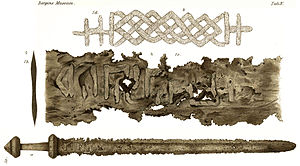 Drawing of the Sæbø sword and its inscription from Petersen (1919).