From Infogalactic: the planetary knowledge core
Jump to: navigation, search
Not to be confused with Victoria Sackville-West.

The Hon. Victoria Mary Sackville-West, Lady Nicolson, CH (9 March 1892 – 2 June 1962), usually known as Vita Sackville-West, was an English poet, novelist, and garden designer. A successful and prolific novelist, poet, and journalist during her lifetime—she was twice awarded the Hawthornden Prize for Imaginative Literature: in 1927 for her pastoral epic, The Land, and in 1933 for her Collected Poems—today she is chiefly remembered for the celebrated garden at Sissinghurst she created with her diplomat husband, Sir Harold Nicolson. She is also remembered as the inspiration for the androgynous protagonist of the historical romp, Orlando: A Biography by her famous friend and admirer, Virginia Woolf, with whom she had an affair.[1] 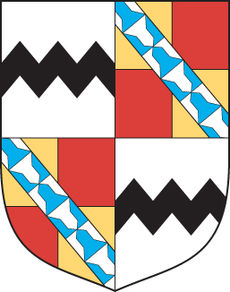 Coat of Arms of the Sackville-West Barony.

The usual English aristocratic inheritance customs were followed by the Sackville family,[lower-alpha 1] which prevented Vita from inheriting Knole on the death of her father. The house followed the title, and was bequeathed instead by her father to his nephew Charles, who became the 4th Baron.

In 1913, at age 21, Vita married the 27-year-old writer and politician Harold George Nicolson (21 November 1886 – 1 May 1968) in the private chapel at Knole. Nicknamed Hadji, or pilgrim, by his father, he was the third son of British diplomat Arthur Nicolson, 1st Baron Carnock (1849–1928). The couple had an open marriage. Both Sackville-West and her husband had same-sex relationships before and after marriage, as did some of the people in the Bloomsbury Group of writers and artists, with many of whom they had connections.[5]

Following the pattern of his father's career, Harold Nicholson was at different times a diplomat, journalist, broadcaster, Member of Parliament, and author of biographies and novels. The couple lived for a number of years in Cihangir, a suburb of Constantinople (now Istanbul), and were present, in 1926, at the coronation of Rezā Shāh, in Tehran, Persia (now Iran). They returned to England in 1914 and bought Long Barn in Kent, where they lived from 1915 to 1930. They employed the architect Edwin Lutyens to make many improvements to the house.[citation needed]

The couple had two children: Nigel (1917–2004), who became a well-known editor, politician, and writer, and Benedict (1914–1978), an art historian. In the 1930s, the family acquired and moved to Sissinghurst Castle, near Cranbrook, Kent. Sissinghurst had once been owned by Vita's ancestors, which gave it a dynastic attraction to her after the loss of Knole.[2] There the couple created the famous gardens that are now run by the National Trust. Sackville-West felt a sense of loss in signing documents in 1947 relinquishing any claim on the property, as part of its transition to the National Trust. She wrote of the signing that it "nearly broke my heart, putting my signature to what I regarded as a betrayal of all the tradition of my ancestors and the house I loved."[6]

Sackville-West was a writer and author of novels. The Edwardians (1930) and All Passion Spent (1931) are perhaps her best-known novels today. In the latter, the elderly Lady Slane courageously embraces a long suppressed sense of freedom and whimsy after a lifetime of convention. This novel was dramatized by the BBC in 1986 starring Dame Wendy Hiller. Her science-fantasy Grand Canyon (1942) is a "cautionary tale" (as she termed it) about a Nazi invasion of an unprepared United States. The book takes an unsuspected twist, however, that makes it something more than a typical invasion yarn.[citation needed]

In 1947 Sackville-West was made a Companion of Honour for her services to literature.[7] The same year she began a weekly column in The Observer called "In your Garden". In 1948 she became a founder member of the National Trust's garden committee.

Sackville-West's long narrative poem, The Land, won the Hawthornden Prize in 1927. She won it again, becoming the only writer to do so, in 1933 with her Collected Poems. 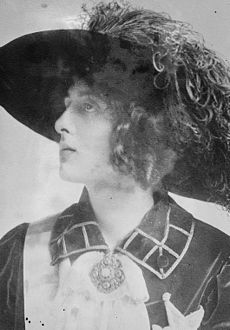 Vita's first close friend was Rosamund Grosvenor (5 September 1888 – 30 June 1944), who was four years her senior. She was the daughter of Algernon Henry Grosvenor (1864–1907), and the granddaughter of Robert Grosvenor, 1st Baron Ebury. Vita met Rosamund at Miss Woolf's school in 1899, when Rosamund had been invited to cheer Vita up while her father was fighting in the Second Boer War. Rosamund and Vita later shared a governess for their morning lessons. As they grew up together, Vita fell in love with Rosamund, whom she called 'Roddie' or 'Rose' or 'the Rubens lady'. Rosamund, in turn, was besotted with Vita. "Oh, I dare say I realized vaguely that I had no business to sleep with Rosamund, and I should certainly never have allowed anyone to find it out," she admits in her journal, but she saw no real conflict: "I really was innocent."[8]

Lady Sackville, Vita's mother, invited Rosamund to visit the family at their villa in Monte Carlo; Rosamund also stayed with Vita at Knole House, at Rue Lafitte, and at Sluie. During the Monte Carlo visit, Vita wrote in her diary, "I love her so much." Upon Rosamund's departure, Vita wrote, "Strange how little I minded [her leaving]; she has no personality, that's why."[8] Their secret relationship ended in 1913 when Vita married. Rosamund died in London in 1944 during a German V1 rocket raid. 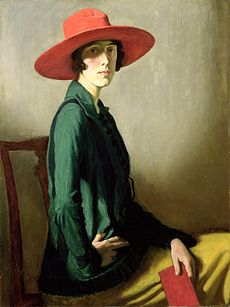 Vita Sackville-West in her twenties, by William Strang, 1918

Sackville-West was more deeply involved with Violet Trefusis, daughter of the Hon. George Keppel and his wife, Alice Keppel, a mistress of King Edward VII. They first met when Vita Sackville-West was 12 and Violet was 10, and attended school together for a number of years.

The relationship began when they were both in their teens and strongly influenced them for years. Both later married and became writers. Vita and Trefusis eloped several times from 1918 on, mostly to France. While there Sackville-West dressed as a man when they went out together. The affair ended badly. Both families were concerned that the women were creating scandal. Trefusis continued to pursue Sackville-West to great lengths until Sackville-West's affairs with other women finally took their toll.

The two women apparently made a bond to remain faithful to one another, meaning that although both were married, neither could engage in sexual relations with her own husband. Sackville-West, who already had two children by Nicholson, was prompted to end the affair when she heard allegations that Trefusis had been involved sexually with her own husband, indicating that she had broken their bond. Despite the rift, the two women were devoted to one another, and deeply in love. They continued to have occasional liaisons for a number of years afterwards, but never rekindled the affair.

Vita's novel Challenge also bears witness to this affair: Sackville-West and Trefusis had started writing this book as a collaborative endeavour, and the male character's name, Julian, had been Sackville-West's nickname when passing as a man. Her mother, Lady Sackville, found the portrayal obvious enough to refuse to allow publication of the novel in England; but Vita's son Nigel Nicolson (1973, p. 194) praises his mother: "She fought for the right to love, men and women, rejecting the conventions that marriage demands exclusive love, and that women should love only men, and men only women. For this she was prepared to give up everything… How could she regret that the knowledge of it should now reach the ears of a new generation, one so infinitely more compassionate than her own?" 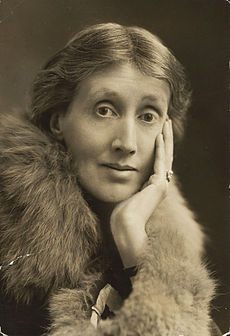 The affair for which Sackville-West is most remembered was in the late 1920s with the prominent writer Virginia Woolf. Woolf was inspired by Vita to write one of her most famous novels, Orlando, featuring a protagonist who changes sex over the centuries. This work was described by Sackville-West's son Nigel Nicolson as "the longest and most charming love-letter in literature."

Unusually, Woolf documented the moment of the conception of Orlando: she wrote in her diary on 5 October 1927: "And instantly the usual exciting devices enter my mind: a biography beginning in the year 1500 and continuing to the present day, called Orlando: Vita; only with a change about from one sex to the other" (excerpt from her diary published posthumously by her husband Leonard Woolf).

One of Vita's male suitors was Henry Lascelles who would later marry the Princess Royal and become the 6th Earl of Harewood.[9]

Vita Sackville-West also had a passionate affair between 1929 and 1931 with Hilda Matheson, head of the BBC Talks Department.[10] She called Hilda by the pet name of "Stoker" during their liaison.

In 1931, Sackville-West was in a ménage à trois with journalist Evelyn Irons, who had interviewed her after her novel The Edwardians was published and became a bestseller, and Irons's lover, Olive Rinder.[11][12] 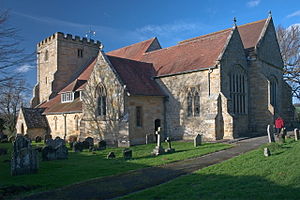 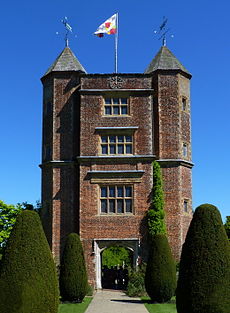 The Elizabethan tower at Sissinghurst in May.

A recording was made of Sackville-West reading from her poem The Land. This was on four 78rpm sides in the Columbia Records 'International Educational Society' Lecture series, Lecture 98 (Cat. no. D 40192/3).[14]