From Infogalactic: the planetary knowledge core
(Redirected from W. K. Clifford)
Jump to: navigation, search
For other people of the same name, see William Clifford (disambiguation).

William Kingdon Clifford FRS (4 May 1845 – 3 March 1879) was an English mathematician and philosopher. Building on the work of Hermann Grassmann, he introduced what is now termed geometric algebra, a special case of the Clifford algebra named in his honour. The operations of geometric algebra have the effect of mirroring, rotating, translating, and mapping the geometric objects that are being modelled to new positions. Clifford algebras in general and geometric algebra in particular, have been of ever increasing importance to mathematical physics,[1] geometry,[2] and computing.[3] Clifford was the first to suggest that gravitation might be a manifestation of an underlying geometry. In his philosophical writings he coined the expression "mind-stuff".

Born at Exeter, William Clifford showed great promise at school. He went on to King's College London (at age 15) and Trinity College, Cambridge, where he was elected fellow in 1868, after being second wrangler in 1867 and second Smith's prizeman.[4] Being second was a fate he shared with others who became famous mathematicians, including William Thomson (Lord Kelvin) and James Clerk Maxwell. In 1870, he was part of an expedition to Italy to observe the solar eclipse of December 22, 1870. During that voyage he survived a shipwreck along the Sicilian coast.[5]

In 1871, he was appointed professor of mathematics and mechanics at University College London, and in 1874 became a fellow of the Royal Society. He was also a member of the London Mathematical Society and the Metaphysical Society.

On 7 April 1875 Clifford married Lucy Lane.[6] In 1876, Clifford suffered a breakdown, probably brought on by overwork. He taught and administered by day, and wrote by night. A half-year holiday in Algeria and Spain allowed him to resume his duties for 18 months, after which he collapsed again. He went to the island of Madeira to recover, but died there of tuberculosis after a few months, leaving a widow with two children. Born eleven days later, Albert Einstein would go on to develop the geometric theory of gravity that Clifford had suggested nine years earlier.

Clifford and his wife are buried in London's Highgate Cemetery just north of the grave of Karl Marx, and near the graves of George Eliot and Herbert Spencer.

"Clifford was above all and before all a geometer." (H. J. S. Smith). The discovery of non-Euclidean geometry opened new possibilities in geometry in Clifford's era. The field of intrinsic differential geometry was born, with the concept of curvature broadly applied to space itself as well as to curved lines and surfaces. Clifford was very much impressed by Bernhard Riemann’s 1854 essay "On the hypotheses which lie at the bases of geometry".[8] In 1870 he reported to the Cambridge Philosophical Society on the curved space concepts of Riemann, and included speculation on the bending of space by gravity. Clifford's translation[9] of Riemann's paper was published in Nature in 1873. His report at Cambridge, On the Space-Theory of Matter, was published in 1876, anticipating Albert Einstein’s general relativity by 40 years. Clifford elaborated elliptic space geometry as a non-Euclidean metric space. Equidistant curves in elliptic space are now said to be Clifford parallels. 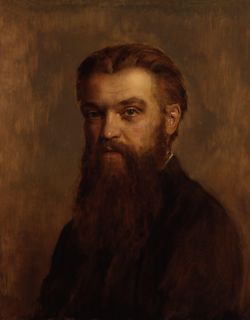 Clifford's contemporaries considered him acute and original, witty and warm. He was also working late into the night, which may have led to his death. He published papers on a range of topics including algebraic forms and projective geometry and the textbook Elements of Dynamic. His application of graph theory to invariant theory was followed up by William Spottiswoode and Alfred Kempe.[10]

In 1878 Clifford published a seminal work, building on Grassmann's extensive algebra.[11] He had succeeded in unifying the quaternions, developed by William Rowan Hamilton, with Grassmann's outer product (also known as the exterior product). He did this by defining a geometric product, composed of the sum of the inner product and that outer product. The former equips geometric algebra with a metric, fully incorporating distance and angle relationships for lines, planes, and volumes. The latter gives those planes and volumes vector-like properties including a directional bias. The resulting geometric algebra, as he called it, realized the long sought goal[12] of creating an algebra that mirrors the movements and projections of objects in 3-dimensional space.[13]

Moreover, Clifford's algebraic schema extends to higher dimensions. The algebraic operations have the same symbolic form as they do in 2 or 3-dimensions. The importance of general Clifford algebras has grown over time, while their isomorphism classes - as real algebras - have been identified in other mathematical systems beyond simply the quaternions.[14]

The realms of real analysis and complex analysis have been expanded through the algebra H of quaternions, thanks to its notion of a three-dimensional sphere embedded in a four-dimensional space. Quaternion versors, which inhabit this 3-sphere, provide a representation of the rotation group SO(3). Clifford noted that Hamilton’s biquaternions were a tensor product

As a philosopher, Clifford's name is chiefly associated with two phrases of his coining, "mind-stuff" and the "tribal self". The former symbolizes his metaphysical conception, suggested to him by his reading of Spinoza. Sir Frederick Pollock wrote about Clifford as follows:

"Briefly put, the conception is that mind is the one ultimate reality; not mind as we know it in the complex forms of conscious feeling and thought, but the simpler elements out of which thought and feeling are built up. The hypothetical ultimate element of mind, or atom of mind-stuff, precisely corresponds to the hypothetical atom of matter, being the ultimate fact of which the material atom is the phenomenon. Matter and the sensible universe are the relations between particular organisms, that is, mind organized into consciousness, and the rest of the world. This leads to results which would in a loose and popular sense be called materialist. But the theory must, as a metaphysical theory, be reckoned on the idealist side. To speak technically, it is an idealist monism."

The other phrase, "tribal self", gives the key to Clifford's ethical view, which explains conscience and the moral law by the development in each individual of a "self", which prescribes the conduct conducive to the welfare of the "tribe." Much of Clifford's contemporary prominence was due to his attitude toward religion. Animated by an intense love of his conception of truth and devotion to public duty, he waged war on such ecclesiastical systems as seemed to him to favour obscurantism, and to put the claims of sect above those of human society. The alarm was greater, as theology was still unreconciled with Darwinism; and Clifford was regarded as a dangerous champion of the antispiritual tendencies then imputed to modern science. There has also been debate on the extent to which Clifford’s doctrine of ‘concomitance’ or ‘psychophysical parallelism’ influenced John Hughlings Jackson’s model of the nervous system and through him the work of Janet, Freud, Ribot, and Ey.[15]

Arguing that it was immoral to believe things for which one lacks evidence, his 1877 essay "The Ethics of Belief" contains the famous principle "it is wrong always, everywhere, and for anyone, to believe anything upon insufficient evidence." As such, he was arguing in direct opposition to religious thinkers for whom "blind faith" (i.e. belief in things in spite of the lack of evidence for them) was a virtue. This paper was famously attacked by pragmatist philosopher William James in his "Will to Believe" lecture. Often these two works are read and published together as touchstones for the debate over evidentialism, faith, and overbelief.

Though Clifford never constructed a full theory of spacetime and relativity, there are some remarkable observations he made in print that foreshadowed these modern concepts: In his book Elements of Dynamic (1878), he introduced "quasi-harmonic motion in a hyperbola". He wrote an expression for a parametrized unit hyperbola, which other authors later used as a model for relativistic velocity. Elsewhere he states,

The geometry of rotors and motors ... forms the basis of the whole modern theory of the relative rest (Static) and the relative motion (Kinematic and Kinetic) of invariable systems.[16]

This passage makes reference to biquaternions, though Clifford made these into split-biquaternions as his independent development. The book continues with a chapter "On the bending of space", the substance of general relativity. Clifford also discussed his views in On the Space-Theory of Matter in 1876.

In 1910 William Barrett Frankland quoted the Space-Theory of Matter in his book on parallelism.[17] He wrote:

The boldness of this speculation is surely unexcelled in the history of thought. Up to the present, however, it presents the appearance of an Icarian flight.

Years later, after general relativity had been advanced by Albert Einstein, various authors noted that Clifford had anticipated Einstein:

In 1923 Hermann Weyl mentioned Clifford[18] as one of those who, like Bernhard Riemann, anticipated the geometric ideas of relativity.

In 1940 Eric Temple Bell published his The Development of Mathematics. There on pages 359 and 360 he discusses the prescience of Clifford on relativity:

Bolder even than Riemann, Clifford confessed his belief (1870) that matter is only a manifestation of curvature in a space-time manifold. This embryonic divination has been acclaimed as an anticipation of Einstein’s (1915–16) relativistic theory of the gravitational field. The actual theory, however, bears but slight resemblance to Clifford’s rather detailed creed. As a rule, those mathematical prophets who never descend to particulars make the top scores. Almost anyone can hit the side of a barn at forty yards with a charge of buckshot.

Also in 1960, at Stanford University for the International Congress for Logic, Methodology, and Philosophy of Science, John Archibald Wheeler introduced his geometrodynamics formulation of general relativity by crediting Clifford as the initiator.[19]

In his The Natural Philosophy of Time (1961, 1980) Gerald James Whitrow recalls Clifford's prescience by quoting him to describe the Friedmann–Lemaître–Robertson–Walker metric in cosmology (1st ed pp 246,7; 2nd ed p 291).

[He] with great ingenuity foresaw in a qualitative fashion that physical matter might be conceived as a curved ripple on a generally flat plane. Many of his ingenious hunches were later realized in Einstein's gravitational theory. Such speculations were automatically premature and could not lead to anything constructive without an intermediate link which demanded the extension of 3-dimensional geometry to the inclusion of time. The theory of curved spaces had to be preceded by the realization that space and time form a single four-dimensional entity.[20]

Riemann, and more specifically Clifford, conjectured that forces and matter might be local irregularities in the curvature of space, and in this they were strikingly prophetic, though for their pains they were dismissed at the time as visionaries.[21]

In 1990 Ruth Farwell and Christopher Knee examined the record on acknowledgement of Clifford's foresight. They conclude "it was Clifford, not Riemann, who anticipated some of the conceptual ideas of General Relativity". To explain the backward attitude to Clifford, they point out that he was an expert in metric geometry, and "metric geometry was too challenging to orthodox epistemology to be pursued." [22] In 1992 Farwell and Knee continued their study with "The Geometric Challenge of Riemann and Clifford"[23] They "hold that once tensors had been used in the theory of general relativity, the framework existed in which a geometrical perspective in physics could be developed and allowed the challenging geometrical conceptions of Riemann and Clifford to be rediscovered."

Most of his work was published posthumously.