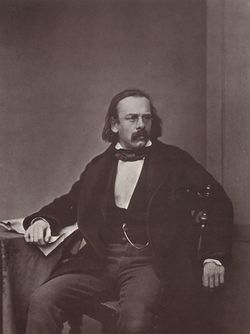 Wilhelm Heinrich Riehl[1] (6 May 1823 – 16 November 1897) was a German journalist, novelist and cultural historian. In his works he emphasized social structures early on and thus gained influence on the development of folklore in the 19th century, of which he is considered the scientific founder.

Wilhelm Heinrich Riehl was born in Biebrich, the son of Friedrich August Riehl (1789–1839), a palace administrator at the ducal Nassau, and his wife Elisabeth Riehl (1793–1856). His father committed suicide in 1839. He first attended the Latin school in Wiesbaden, then the grammar school in Weilburg, where he passed the school-leaving examination in 1841.

From 1841 to 1843 he studied theology in Marburg, Tübingen and Giessen. Motives for this study were the suicide of his father and the bad financial situation. After passing his exams, he turned to philosophy, history and art history, which he studied in Bonn, among other places. Ernst Moritz Arndt was one of his academic teachers there. Under the influence of Arndt, Riehl, who actually wanted to become a village pastor after passing the theological candidate exam, decided to become a writer dealing with cultural history and social politics.

He had already been active as a writer and journalist since 1841. Topics such as economics, church politics, and forestry and agriculture were to follow. Riehl wrote newspaper articles in Frankfurt am Main, Karlsruhe and Wiesbaden and edited the Nassauische Allgemeine Zeitung from 1848 to 1851, while at the same time being entrusted with the musical direction of the court theater in Wiesbaden. The Allgemeine Zeitung was a daily newspaper established on April 1, 1848, by the Nassau government to represent its positions. Riehl seems to have already retired from active work at the end of April 1850. He was succeeded by Alois Boczek, who set the paper on a course of political Catholicism. The resulting dispute with the Nassau government led to the discontinuation of the Allgemeine Zeitung on August 22, 1854.

From 1851 to 1854, Riehl worked in Augsburg as editor of the local Allgemeine Zeitung. From this time on, articles by him also appeared regularly in the prestigious Deutsche Vierteljahrsschrift.

In 1854, Maximilian II brought him to the Munich court, where he became "Editor-in-Chief for Press and Foreign Affairs of the Royal Household" and received an honorary professorship at the faculty of state economics, which was converted to a full professorship for cultural history and statistics in 1859. His lectures were among the best attended at the university. In 1861 he became a member of the Bavarian Academy of Sciences.

In 1883, Riehl was raised to the rank of nobility. In 1885 he was appointed director of the Bavarian National Museum and general curator of the art monuments and antiquities of Bavaria.

Riehl married Bertha von Knoll (1824–1894) from Stuttgart in 1846 in Eppstein (Taunus). Before her marriage she was a successful singer at the Frankfurt City Theater. The couple had five sons, one of whom died young, and four daughters, including:

After the death of his first wife, he married Antonie Eckardt (died 1916) in Stuttgart in 1896. Riehl died in Munich at the age of 74.

Riehl's scientific interest was the "Gesittung" of the German people. Methodologically, he was pioneering: the researcher should wander his field. He was one of the first to deal scientifically with topics of social and cultural history. Among other things, he attempted to establish "folklore as a science" or a "science of the people.

His most famous work is Die Naturgeschichte des Volkes als Grundlage einer deutschen Social-Politik (1851–1869; 4 volumes), which emphasizes geographical factors, social conditions, and German culture and way of life. In the first volume Land und Leute (1854), Riehl placed the national character of the European peoples in a direct relationship to their surrounding environment: characteristic landscapes of the English and French were the tamed park and the cleared field, whose counterpart he saw in the wilderness of the German forest. In the third volume, Die Familie (1855), he analyzed the family as the basis of all social developments and as the nucleus of society. His basic approach was his dichotomous view of the sexes: the difference "between woman and man" gave rise, like a law, to the "unequal division of bourgeois and political society".

Riehl not only took a critical view of urbanization in a time of industrialization, but even claimed that it destroyed families. Furthermore, he argued, urban space should not displace "forest, pasture, and water," thus attacking the influences on the state of the landscape that accompanied the emergence of a civilized society far removed from nature. Riehl also saw urban space as the "breeding ground for the socialist spirit of egalitarianism" as a result of the isolation of desperate individuals, which in turn was due to the destruction of families.

Riehl, however, did not oppose any developments from the cities. He stated that "inertia" in the social conservatism of the peasant population and "movement" in the progressive attitude of city dwellers were equally fundamental to society.

Riehl is considered a pioneer or founder of folklore, cultural history, and sociology, among others, because of his subject of study. His theories have been significant for the development of the cultural and social history of Germany. Still of value are his descriptions of numerous, even remote, milieus (e.g., traveling theaters, rogues). However, his rejection of analytical procedures and "book erudition" in favor of wandering experiences and literary expression has become less common; yet in contemporary German-language cultural sociology, Girtler and Honer, among others, apply this method.

Riehl is also considered one of the pioneers of nature conservation in the sense of wilderness and not (only) cultural landscape protection. Thus, in 1857, he demanded the "right of wilderness" in addition to the "right of the field": "For centuries, it was a matter of progress to unilaterally represent the right of the field; now, on the other hand, it is also a matter of progress to represent the right of wilderness in addition to the right of the arable land. And even if the people's economist resists and revolts against this fact, the people-researching social politician must nevertheless insist and fight also for the right of wildness."[2] The successful development of a "people's organism" requires not only the formation of cultural uniqueness (cf. Herder), but also the preservation of wilderness, on the one hand, as a reservoir of original, unalienated power that protects against the negative consequences of industrialization, urbanization, etc., and, on the other hand, as a place of absence of social constraints and thus of personal freedom, where man can become aware of his nature-given individuality, natural morality, and individual self-responsibility.[3]

Riehl is also considered one of the main pioneers of the concept of the patriarchal extended family in the "whole house" as a typical form of life in the pre-industrial era, which was only destroyed by the onset of industrialization, but which, according to today's knowledge, did not exist in this form and distribution.[4]

Riehl received the Order of Maximilian (1871), was appointed Privy Councilor (1889) and was a recipient of the Bavarian Order of Merit (1897). In honor of Riehl, an institution for second-chance education, the Wilhelm Heinrich Riehl College, was established as a foundation by the Düsseldorf Chamber of Skilled Crafts in 1958 and named after him.