From Infogalactic: the planetary knowledge core
Jump to: navigation, search
This article is about the historical and legendary Witches' Sabbath. For the modern Wiccan Sabbat, see Wheel of the Year. For other uses, see esbat.
For either of two paintings by Francisco de Goya, see Witches' Sabbath (disambiguation). 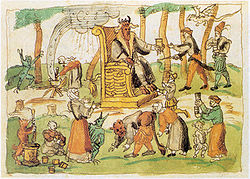 Representation of Sabbath gatherings from the chronicles of Johann Jakob Wick.

The Witches' Sabbath or Sabbat is a meeting of those who practice witchcraft and other rites.

European records indicate cases of persons being accused or tried for taking part in Sabbat gatherings, from the Middle Ages to the 17th century or later.

The English word "sabbat" is of obscure etymology and late diffusion, and local variations of the name given to witches' gatherings were frequent.[1] "Sabbat" came indirectly from Hebrew שַׁבָּת (Shabbath, "day of rest"). In modern Judaism, Shabbat is the rest day celebrated from Friday evening to Saturday nightfall; in modern Christianity, Sabbath refers to Sunday, or to a time period similar to Sabbath in the seventh-day church minority. In connection with the medieval beliefs in the evil power of witches and in the malevolence of Jews and Judaizing heretics (both being Sabbathkeepers),[2] satanic gatherings of witches were by outsiders called "sabbats", "synagogues", or "convents".[1]

The Sabbath in history 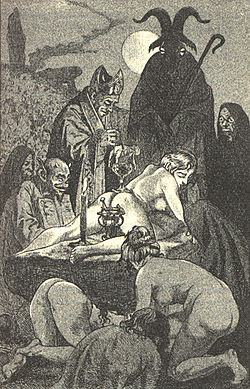 Although allusions to Sabbats were made by the Catholic Canon law since about 905, the first book that mentions the Sabbat is, theoretically, Canon Episcopi, included in Burchard of Worms's collection in the 11th century. The Canon Episcopi alleged that "Diana's rides," (by the name of the Roman goddess of the hunt) were false, and that these spirit travels did not occur in reality. Errores Gazariorum later evoked the Sabbat, in 1452.

In the 13th century the accusation of participation in a Sabbat was considered very serious. Helping to publicize belief in and the threat of the Witches' Sabbath was the extensive preaching of the popular Franciscan reformer, Saint Bernardino of Siena (1380–1444), whose widely circulating sermons contain various references to the sabbath as it was then conceived and hence represent valuable early sources into the history of this phenomenon.[3] Some allusions to meetings of witches with demons are also made in the Inquistors' manual of witch-hunting, the Malleus Maleficarum (1486). Nevertheless, it was during the Renaissance when Sabbat folklore was most popular, more books on them were published, and more people lost their lives when accused of participating. Commentarius de Maleficiis (1622), by Peter Binsfeld, cites accusation of participation in Sabbats as a proof of guiltiness in an accusation for the practice of witchcraft.

It is important to note, however, that in spite of the number of times that authorities retold stories of the sabbat, modern researchers have been unable to find any corroboration that any such event ever occurred.[4] The historian Scott E. Hendrix presents a two-fold explanation for why these stories were so commonly told in spite of the fact that sabbats likely never actually occurred in his study "The Pursuit of Witches and the Sexual Discourse of the Sabbat." First, belief in the existence of witches was widespread in late medieval and early-modern Europe. Many religious authorities believed there was a vast underground conspiracy of witches who were responsible for the horrific famines, plague, warfare, and problems in the Catholic Church that became endemic in the fourteenth century.[5] By blaming witches, religious authorities provided a handy scapegoat for those who might otherwise question God's goodness. Second, stories of the sabbat had prurient and orgiastic elements, which caused these stories to be told and retold. In effect, the sabbat acted as an effective 'advertising' gimmick, causing knowledge of what these authorities believed to be the very real threat of witchcraft to be spread more rapidly across the continent.[6] Unfortunately that also meant that stories of the sabbat promoted the hunting, prosecution, and execution of supposed witches.

The Catholic Church's views on the Sabbat

The Compendium Maleficarum (1608), by Francesco Maria Guazzo, aka Guaccio, Guaccius is a book published by an Italian priest with some illustrations of what he imagined could be a Sabbat, and gives a description of it; a brief summary can be cited as an example: "the attendants go riding flying goats, trample the cross, are made to be re-baptised in the name of the Devil, give their clothes to him, kiss the Devil's behind, and dance back to back forming a round".

According to Hans Baldung Grien (ca 1484-1545) and Pierre de Rostegny, aka De Lancre (1553–1631) human flesh was eaten during Sabbats, preferably children, and also human bones stewed in a special way. It was also said by some authors[by whom?] that salt, bread and oil were prohibited because the Devil hated them; while other testimonies told about delicious dishes. Other descriptions add that human fat, especially of non-baptised children, was used to make an unguent that enabled the witches to fly; such an ointment is referred to in "Young Goodman Brown" by Nathaniel Hawthorne in a conversation between Goody Cloyse and the dark stranger. It was also believed[who?] that witches could fly by themselves, ride a broom, or be carried by demons to the place of the meeting.

The most common belief on which authors[who?] agreed is that Satan was present at the Sabbat, often as a goat or satyr, and many agreed that more demons were present. Another belief said that sometimes a person could offer his/her own body to be possessed by some demon serving as a medium (see demon possession). It was believed[by whom?] that the Sabbat commenced at midnight and ended at dawn, beginning with a procession, continuing with a banquet, then a Black Mass, and culminating with an orgy in which uninhibited sexual intercourse with demons in male or female form was practiced. Consumption of hallucinogens and sometimes alcohol was often reported.

According to folklore, the Sabbat was most often celebrated in isolated places, preferably forests or mountains. Some famous places where these events were said to have been celebrated are Briany, Carignano, Benevento, Puy-de-Dôme (France), Blå Jungfrun (Sweden), Blocksberg, Melibäus, the Black Forest, (Germany), the Bald Mount (Poland), Vaspaku, Zabern, Kopastatö (Hungary), San Colombano al Lambro (Italy) and more, but it was also said that Stonehenge (England) was a place for Sabbats. In the Basque country the Sabbat (there called Akelarre, or 'field of the goat') was said to be celebrated in isolated fields. In East Slavic folklore, the common name for the Sabbat mountain is Lysa Hora ("Bald Mountain).

There is no agreement among authors concerning the dates on which the Sabbats were to be celebrated. Some hypothosized they would take place during the night of the Sunday before the time the Christian mass was celebrated, some authors disagreed telling that Satan was less powerful on holy days.

According to the testimonies of benandanti and similar European groups (see below), common dates for gatherings are during the weeks of the Ember days, during the twelve days of Christmas or at Pentecost.

As referenced earlier, Hawthorne seems to have been describing a witches' sabbath and the surrounding activity in his short story, "Young Goodman Brown." Musically, the supposed ritual has been used as inspiration for such works as Night on Bald Mountain by Modest Mussorgsky and the fifth movement of Hector Berlioz's Symphonie Fantastique.

Depictions in painting include the following:

Disputed accuracy of the accounts

The descriptions of Sabbats were made or published by priests, jurists and judges who never took part in these gatherings, or were transcribed during the process of the witchcraft trials. That these testimonies reflect actual events is for most of the accounts considered doubtful. Norman Cohn argued that they were determined largely by the expectations of the interrogators and free association on the part of the accused, and reflect only popular imagination of the times, influenced by ignorance, fear, and religious intolerance towards minority groups.[7] Some of the existing accounts of the Sabbat were given when the person recounting them was being tortured.[8] and so motivated to agree with suggestions put to them.

Many of the diabolical elements of the Witches' Sabbath stereotype, such as the eating of babies, poisoning of wells, desecration of hosts or kissing of the devil's anus, were also made about heretical Christian sects, lepers, Muslims, and Jews.[9] The term is the same as the normal English word "Sabbath" (itself a transliteration of Hebrew "Shabbat", the seventh day, on which the Creator rested after creation of the world), referring to the witches' equivalent to the Christian day of rest; a more common term was "synagogue" or "synagogue of Satan",[10] possibly reflecting anti-Jewish sentiment, although the acts attributed to witches bear little resemblance to the Sabbath in Christianity or Jewish Shabbat customs. The Errores Gazariorum (Errors of the Cathars), which mentions the Sabbat, while not discussing the actual behavior of the Cathars, is named after them, in an attempt to link these stories to an heretical Christian group.[11]

Christian missionaries' attitude to African cults was not much different in principle to their attitude to the Witches' Sabbath in Europe; some accounts viewed them as a kind of Witches' Sabbath, but they are not.[12] Some African communities believe in witchcraft, but as in the European witch trials, people they believe to be "witches" are condemned rather than embraced.

Other historians, including Carlo Ginzburg, Éva Pócs, Bengt Ankarloo and Gustav Henningsen hold that these testimonies can give insights into the belief systems of the accused. Ginzburg famously discovered records of a group of individuals in northern Italy, calling themselves benandanti, who believed that they went out of their bodies in spirit and fought amongst the clouds against evil spirits to secure prosperity for their villages, or congregated at large feasts presided over by a goddess, where she taught them magic and performed divinations.[9] Ginzburg links these beliefs with similar testimonies recorded across Europe, from the armiers of the Pyrenees, from the followers of Signora Oriente in fourteenth century Milan and the followers of Richella and 'the wise Sibillia' in fifteenth century northern Italy, and much further afield, from Livonian werewolves, Dalmatian kresniki, Hungarian táltos, Romanian căluşari and Ossetian burkudzauta. In many testimonies these meetings were described as out-of-body, rather than physical, occurrences.[9]