From Infogalactic: the planetary knowledge core
Jump to: navigation, search
For other meanings, see Pyrenees (disambiguation).

The Pyrenees (/ˈpɪrᵻniːz/; Spanish: Pirineos [piɾiˈneos], French: Pyrénées [piʁene], Aragonese: Pirineus, Catalan: Pirineus, Occitan: Pirenèus, Basque: Pirinioak or Auñamendiak) is a range of mountains in southwest Europe that forms a natural border between France and Spain. It separates the Iberian Peninsula from the rest of continental Europe, and extends for about 491 km (305 mi) from the Bay of Biscay (Cap Higuer) to the Mediterranean Sea (Cap de Creus).

For the most part, the main crest forms a massive divider between France and Spain, with the small country of Andorra sandwiched in between. The Crown of Aragon and the Kingdom of Navarre have historically extended on both sides of the mountain range, with smaller northern portions now in France and larger southern parts now in Spain.[1][2]

The demonym for the noun "Pyrenees" in English is Pyrenean.

In classical mythology, Pyrene is a princess who gave her name to the Pyrenees. The Greek historian Herodotus says Pyrene is the name of a town in Celtic Europe.[3] According to Silius Italicus,[4] she was the virginal daughter of Bebryx, a king in Mediterranean Gaul by whom the hero Hercules was given hospitality during his quest to steal the cattle of Geryon[5] during his famous Labors. Hercules, characteristically drunk and lustful, violates the sacred code of hospitality and rapes his host's daughter. Pyrene gives birth to a serpent and runs away to the woods, afraid that her father will be angry. Alone, she pours out her story to the trees, attracting the attention instead of wild beasts who tear her to pieces.

After his victory over Geryon, Hercules passes through the kingdom of Bebryx again, finding the girl's lacerated remains. As is often the case in stories of this hero, the sober Hercules responds with heartbroken grief and remorse at the actions of his darker self, and lays Pyrene to rest tenderly, demanding that the surrounding geography join in mourning and preserve her name:[6] "struck by Herculean voice, the mountaintops shudder at the ridges; he kept crying out with a sorrowful noise 'Pyrene!' and all the rock-cliffs and wild-beast haunts echo back 'Pyrene!' … The mountains hold on to the wept-over name through the ages." Pliny the Elder connects the story of Hercules and Pyrene to Lusitania, but rejects it as fabulosa, highly fictional.[7]

The Spanish Pyrenees are part of the following provinces, from east to west: Girona, Barcelona, Lleida (all in Catalonia), Huesca (in Aragon), Navarra (in Navarre) and Gipuzkoa (in the Basque Country).

The French Pyrenees are part of the following départements, from east to west: Pyrénées-Orientales (North Catalonia and Fenolheda), Aude, Ariège, Haute-Garonne, Hautes-Pyrénées, and Pyrénées-Atlantiques (the latter two of which include Pyrenees National Park).

The independent principality of Andorra is sandwiched in the eastern portion of the mountain range between the Spanish Pyrenees and French Pyrenees. 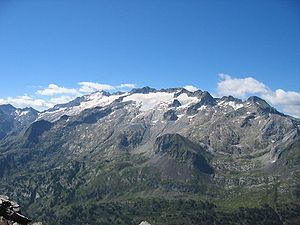 Pico del Aneto, the highest mountain of the Pyrenees. 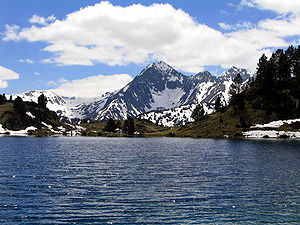 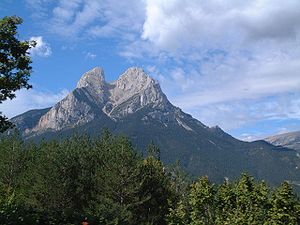 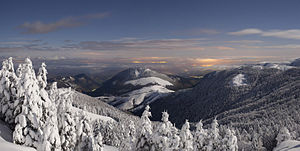 Physiographically, the Pyrenees may be divided into three sections: the Atlantic (or Western), the Central, and the Eastern Pyrenees. Together, they form a distinct physiographic province of the larger Alpine System division.

In the Western Pyrenees, from the Basque mountains near the Bay of Biscay of the Atlantic Ocean, the average elevation gradually increases from west to east.

The Central Pyrenees extend eastward from the Aran Valley to the Somport pass, and they include the highest summits of this range:

In the Eastern Pyrenees, with the exception of one break at the eastern extremity of the Pyrénées Ariégeoises, the mean elevation is remarkably uniform until a sudden decline occurs in the easternmost portion of the chain known as the Albères.

See also: Geology of the Pyrenees

The Pyrenees are older than the Alps: their sediments were first deposited in coastal basins during the Paleozoic and Mesozoic eras. Between 100 and 150 million years ago, during the Lower Cretaceous Period, the Bay of Biscay fanned out, pushing present-day Spain against France and applying intense compressional pressure to large layers of sedimentary rock. The intense pressure and uplifting of the Earth's crust first affected the eastern part and moved progressively to the entire chain, culminating in the Eocene Epoch.

The eastern part of the Pyrenees consists largely of granite and gneissose rocks, while in the western part the granite peaks are flanked by layers of limestone. The massive and unworn character of the chain comes from its abundance of granite, which is particularly resistant to erosion, as well as weak glacial development.

Conspicuous features of Pyrenean scenery are:

The highest waterfall is Gavarnie (462 m or 1,515 ft), at the head of the Gave de Pau; the Cirque de Gavarnie, in the same valley, together with the nearby Cirque de Troumouse and Cirque d'Estaubé, are notable examples of the cirque formation. Low passes are lacking, and the principal roads and the railroads between France and Spain run only in the lowlands at the western and eastern ends of the Pyrenees, near sea level. Between the two ends of the range, the only passes worth mentioning are the Col de la Perche, between the valley of the Têt and the valley of the Segre, the Port d'Envalira, the highest mountain pass in the Pyrenees and one of the highest points of the European road network, and the Col de Somport or Port de Canfranc, where there were old Roman roads but, apparently, no modern highways.

A notable visual feature of this mountain range is La Brèche de Roland, a gap in the ridge line, which - according to legend - was created by Roland. 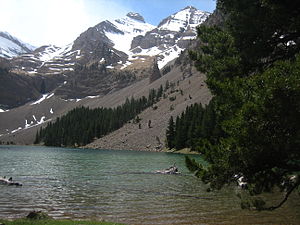 The metallic ores of the Pyrenees are not in general of much importance now, though there were iron mines at several locations in Andorra, as well as at Vicdessos in Ariège, and the foot of Canigou in Pyrénées-Orientales long ago. Coal deposits capable of being profitably worked are situated chiefly on the Spanish slopes, but the French side has beds of lignite. The open pit of Trimoun close to the commune of Luzenac (Ariège) is one of the greatest sources of talc in Europe.

Mineral springs are abundant and remarkable, and especially noteworthy are the hot springs, of which the Alps are very deficient. The hot springs, among which those of Les Escaldes in Andorra, Panticosa and Lles in Spain, Ax-les-Thermes, Bagnères-de-Luchon and Eaux-Chaudes in France may be mentioned, are sulphurous and mostly situated high, near the contact of the granite with the stratified rocks. The lower springs, such as those of Bagnères-de-Bigorre (Hautes-Pyrénées), Rennes-les-Bains (Aude) and Campagne-sur-Aude (Aude), are mostly selenitic and not very cold.

The amount of precipitation the range receives, including rain and snow, is much greater in the western than in the eastern Pyrenees because of the moist air that blows in from the Atlantic Ocean over the Bay of Biscay. After dropping its moisture over the western and central Pyrenees, the air is left dry over the eastern Pyrenees. The winter average temperature is -2 °C (28.4 °F).

Sections of the mountain range vary in more than one respect. There are some glaciers in the western and snowy central Pyrenees, but there are no glaciers in the eastern Pyrenees because there is insufficient snowfall to cause their development. Glaciers are confined to the northern slopes of the central Pyrenees, and do not descend, like those of the Alps, far down into the valleys but rather have their greatest lengths along the direction of the mountain chain. They form, in fact, in a narrow zone near the crest of the highest mountains. Here, as in the other great mountain ranges of central Europe, there is substantial evidence of a much wider expanse of glaciation during the Ice Ages. The best evidence of this is in the valley of Argeles Gazost, between Lourdes and Gavarnie, in the département of Hautes-Pyrénées.

The annual snow-line varies in different parts of the Pyrenees from about 2,700 to 2,800 metres above sea level. In average the seasonal snow is observed at least 50% of the time above 1,600 metres between December and April.[8] 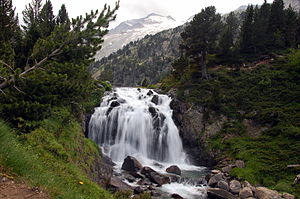 A still more marked effect of the preponderance of rainfall in the western half of the chain is seen in the vegetation. The lower mountains in the extreme west are wooded, but the extent of forest declines as one moves eastwards. The eastern Pyrenees are peculiarly wild and barren, all the more since it is in this part of the chain that granitic masses prevail. Also moving from west to east, there is a change in the composition of the flora, with the change becoming most evident as one passes the centre of the mountain chain from which point the Corbières stretch north-eastwards towards the central plateau of France. Though the difference in latitude is only about 1°, in the west the flora resembles that of central Europe while in the east it is distinctly Mediterranean in character. The Pyrenees are nearly as rich in endemic species as the Alps, and among the most remarkable instances of that endemism is the occurrence of the monotypic genus Xatardia (family Apiaceae), which grows only on a high alpine pass between the Val d'Eynes and Catalonia. Other examples include Arenaria montana, Bulbocodium vernum, and Ranunculus glacialis. The genus most abundantly represented in the range is that of the saxifrages, several species of which are endemic here.

In their fauna the Pyrenees present some striking instances of endemism. The Pyrenean desman is found only in some of the streams of the northern slopes of these mountains; the only other member of this genus is confined to the rivers of the Caucasus in southern Russia. The Pyrenean euprocte (Euproctus pyrenaicus), an endemic relative of the salamander, also lives in streams and lakes located at high altitudes. Among other peculiarities of Pyrenean fauna are blind insects in the caverns of Ariège, the principal genera of which are Anophthalmus and Adelops.

The Pyrenean Ibex mysteriously became extinct in January 2000; the native Pyrenean brown bear was hunted to near-extinction in the 1990s, but it was re-introduced in 1996 when three bears were brought from Slovenia. The bear population has bred successfully, and there are now believed to be about 15 brown bears in the central region around Fos, but only four native ones are still living in the Aspe Valley. 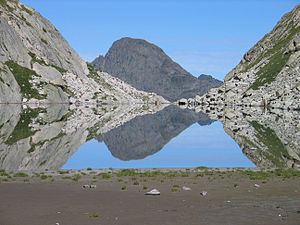 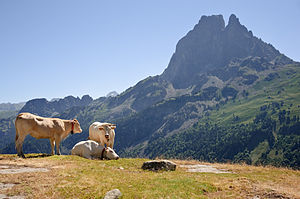 Some Blonde d'Aquitaine on summer pasture near the Pic du Midi d'Ossau.

The principal languages spoken in the area are Spanish, French, Aragonese, Catalan (in Catalonia and Andorra), and Basque. Also spoken, to a lesser degree, are the Occitan language (the Gascon and Languedocien dialects in France and the Aranese dialect in the Aran Valley).

Both sides of the Pyrenees are popular spots for winter sports such as alpine skiing and mountaineering. The Pyrenees are also a good place for athletes to do high-altitude training in the summertime, such as by bicycling and cross-country running.

In the summer and the autumn, the Pyrenees are usually featured in two of cycling's grand tours, the Tour de France held annually in July and the Vuelta a España held in September. The stages held in the Pyrenees are often crucial legs of both tours, drawing hundreds of thousands of spectators to the region.

Three main long-distance footpaths run the length of the mountain range: the GR 10 across the northern slopes, the GR 11 across the southern slopes, and the HRP which traverses peaks and ridges along a high altitude route. In addition, there are numerous marked and unmarked trails throughout the region.

Pirena is a dog-mushing competition held in the Pyrenees.

Ski resorts in the Pyrenees include: 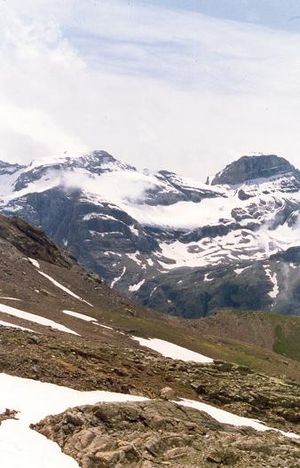 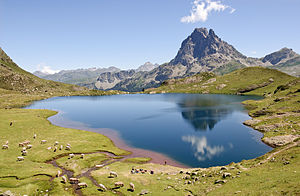 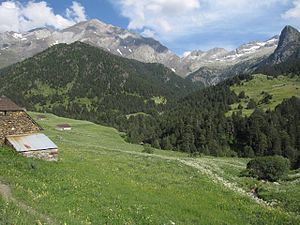