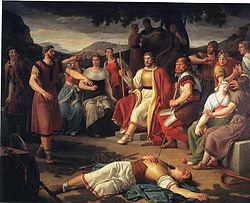 Æsir gathered around the body of Baldr. Painting by Christoffer Wilhelm Eckersberg 1817

In Old Norse, ǫ́ss (or áss, ás, plural æsir; feminine ásynja, plural ásynjur) is the term denoting a member of the principal pantheon in the indigenous Germanic religion known as Norse religion. This pantheon includes Odin, Frigg, Thor, Baldr and Týr. The second pantheon comprises the Vanir. In Norse mythology, the two pantheons wage the Æsir-Vanir War, which results in a unified pantheon.

The cognate term in Old English is ōs (plural ēse) denoting a deity in Anglo-Saxon paganism. The Old High German is ans, plural ensî.[1] The Gothic language had ans- (based only on Jordanes who glossed anses with uncertain meaning, possibly 'demi-god' and presumably a Latinized form of actual plural *anseis).[2] The reconstructed Proto-Germanic form is *ansuz (plural *ansiwiz). The a-rune ᚫ was named after the æsir.

Unlike the Old English word god (and Old Norse goð), the term ōs (áss) was never adopted into Christian use and survived only in a secularized meaning of "pole, beam, stave, hill" or "yoke".

Æsir is the plural of áss, óss "god" (gen. āsir) which is attested in other Germanic languages, e.g., Old English ōs (gen. pl. ēsa) and Gothic (as reported by Jordanes) anses "half-gods". These all stem from Proto-Germanic *ansis ~ ansuz, which itself comes from Proto-Indo-European *h₂énsus (gen. h₂n̥sóus) "life force" (cf. Avestan aŋhū "lord; lifetime", ahura "godhood", Sanskrit ásu "life force",[3] ásura "god" (< *h₂n̥suró)). It is widely accepted that this word is further related to *h₂ens- "to engender" (cf. Hittite hass- "to procreate, give birth", Tocharian B ās- "to produce").[4]

The feminine's -ynja suffix is known from a few other nouns denoting female animals, such as apynja "female monkey", vargynja "she-wolf". The word for "goddess" is not attested outside Old Norse.

The latinization of Danish Aslak as Ansleicus[5] indicates that the nasalization in the first syllable persisted into the 9th century.

The cognate Old English form to áss is ōs, preserved only as a prefix Ōs- in personal names (e.g. Oscar, Osborne, Oswald) and some place names, and as the genitive plural ēsa (ēsa gescot and ylfa gescot, "the shots of anses and of elves", jaculum divorum et geniorum). In Old High German and Old Saxon the word is only attested in personal and place names, e.g. Ansebert, Anselm, Ansfrid, Vihans. Jordanes has anses for the gods of the Goths.[6]

The interaction between the Æsir and the Vanir has provoked an amount of scholarly theory and speculation. While other cultures have had "elder" and "younger" families of gods, as with the Titans versus the Olympians of ancient Greece, the Æsir and Vanir were portrayed as contemporaries. The two clans of gods fought battles, concluded treaties, and exchanged hostages (Freyr and Freyja are mentioned as such hostages).

An áss like Ullr is almost unknown in the myths, but his name is seen in a lot of geographical names, especially in Sweden, and may also appear on the 3rd century Thorsberg chape, suggesting that his cult was widespread in prehistoric times.

The names of the first three Æsir in Norse mythology, Vili, Vé and Odin all refer to spiritual or mental state, vili to conscious will or desire, vé to the sacred or numinous and óðr to the manic or ecstatic.

A second clan of gods, the Vanir, is also mentioned in Norse mythology: the god Njord and his children, Freyr and Freyja, are the most prominent Vanir gods who join the Æsir as hostages after a war between Æsir and Vanir. The Vanir appear to have mainly been connected with cultivation and fertility and the Æsir were connected with power and war.

In the Eddas, however, the word Æsir is used for gods in general, while Asynjur is used for the goddesses in general. For example, in the poem Skírnismál, Freyr was called "Prince of the Æsir". In the Prose Edda, Njord was introduced as "the third among the Æsir", and among the Asynjur, Freyja is always listed second only to Frigg.

In surviving tales, the origins of many of the Æsir are unexplained. Originally, there are just three: Odin and his brothers Vili and Vé. Odin's sons by giantesses are naturally counted as Æsir. Heimdall and Ullr's connection with the Æsir is not clearly mentioned. Loki is a jötunn, and Njord is a Vanir hostage, but they are often ranked among the Æsir.

Given the difference between their roles and emphases, some scholars have speculated that the interactions between the Æsir and the Vanir reflect the types of interaction that were occurring between social classes (or clans) within Norse society at the time.[7] According to another theory, the Vanir (and the fertility cult associated with them) may be more archaic than that of the more warlike Æsir, such that the mythical war may mirror a half-remembered religious conflict.[8] Another historical theory is that the inter-pantheon interaction may be an apotheosization of the conflict between the Romans and the Sabines.[9] Finally, the noted comparative religion scholar Mircea Eliade speculated that this conflict is actually a later version of an Indo-European myth concerning the conflict between and eventual integration of a pantheon of sky/warrior/ruler gods and a pantheon of earth/economics/fertility gods, with no strict historical antecedents.[10]

Gylfaginning (20.ff) gives a list of twelve male aesir, not including Odin their chief, nor including Loki, "whom some call the backbiter of the asas":

Then said Gangleri: Which are the Æsir in whom it is man’s duty to believe? Har answers: Twelve are the Æsir of the race of gods. Then said Jafnhar: The Asynjur are not less holy and they are not less capable. Then said Thrithi: Odin is the greatest and oldest of the Æsir. ... Frigg is his wife, and she knows the fate of men, although she tells not thereof. ...

(33.) There is yet one who is numbered among the asas, but whom some call the backbiter of the asas. He is the originator of deceit, and the disgrace of all gods and men. His name is Loki, or Lopt. ... His wife hight Sigyn, and their son, Nare, or Narfe.

Ganglere asked: Which are the goddesses? Har answered:

Sol and Bil are numbered among the goddesses, but their nature has already been described.

The a-rune ᚫ, Younger Futhark ᚬ was probably named after the Æsir. The name in this sense survives only in the Icelandic rune poem as Óss, referring to Odin in particular, identified with Jupiter:

The name of 𐌰 a in the Gothic alphabet is ahsa. The common Germanic name of the rune may thus have either been ansuz "God, one of the Æsir", or ahsam "ear (of corn)"

The personal names Old Norse Ásleikr (Latinized Ansleicus), Old English Óslác (modern "Hasluck") and Old High German Ansleh may continue the term for a sacrificial performance for the gods in early Germanic paganism (*ansu-laikom). Grimm's Deutsches Wörterbuch (s.v. "Leich") compares *laikom to the meaning of Greek χορος, denoting first the ceremonial procession to the sacrifice, but also ritual dance and hymns pertaining to religious ritual. Hermann (1906)[11] identifies as such *ansulaikom the victory songs of the Batavi after defeating Quintus Petillius Cerialis in the Batavian rebellion of 69 AD (according to Tacitus' account), and also the "nefarious song" accompanied by "running in a circle" around the head of a decapitated goat sacrificed to (he presumes) Wodan, sung by the Lombards at their victory celebration in 579 according to the report of Pope Gregory the Great (Dialogues ch. 28).

As also occurs in some English names. In 874, King Asketil was one of four Viking nobles who sacked Repton, the capital of Mercia, England. As 'ketil' means 'cauldron' (from whence the English word 'kettle' is derived), his name means 'God's cauldron'. The English surname Astle is derived from his name, however it is not related to the name Astley. Less common alternative spellings of Astle include Astel, Astell, Astill, Astyll and Astull.

Ásatrú, meaning "faith in the Æsir", is a new religious movement of polytheistic reconstructionism based on Norse paganism. As of 2007, Ásatrú is a religion officially recognized by the governments of Iceland, Norway, Denmark,[not in citation given][12] and Sweden.

In spite of the literal meaning of Ásatrú, most adherents do not emphasize worship of the Æsir in particular. The Icelandic Ásatrúarfélagið describes Ásatrú as "Nordic pantheism" involving "belief in the Icelandic/Nordic folklore" including all the "spirits and entities" besides "gods and other beings" this entails.[13] The American Asatru Folk Assembly defines Ásatrú as "an expression of the native, pre-Christian spirituality of Europe" postulating it as "native European religion" in general "just as there is Native American religion and native African religion".[14]