Larry Doby was the first African American to play in the American League.

Cleveland pitching was also strong, as Indians pitchers had combined for an MLB-high 17 complete games pitched before the Players' Strike prematurely ended the season.[10] 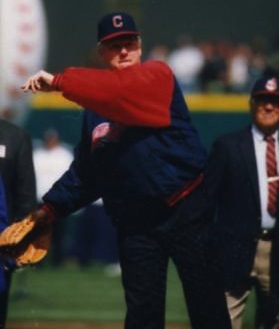 In May 1990, Cuyahoga County voters approved a 15-year sin tax on alcohol and cigarette sales in order to finance the new sports complex. In June 1992, the ceremonial first pitch was thrown at the site of the new Jacobs Field before construction of the building began.

In 1994, the ballpark opened under the name Jacobs Field as the new home of the Cleveland Indians, which had previously shared Cleveland Municipal Stadium with the NFL's Cleveland Browns. On April 4, 1994, the Indians played their first game at the new stadium. President Bill Clinton threw out the ceremonial first pitch, and the Indians defeated the Seattle Mariners 4-3 in 11 innings.