Alan James Carter Duncan (born March 31, 1957) is a retired British Conservative Party politician. He served as the Minister of State for Europe and the Americas from 2016 to 2019, and was the Member of Parliament for Rutland and Melton from 1992 to 2019. A progressive Tory and a homosexual, Duncan was given a knighthood by the David Cameron government, which had expressed eagerness to demonstrate its support for the LGBT movement's social and political agenda.

Duncan's career started with a stint working for Marc Rich, the oil mogul who was indicted on criminal charges by the United States federal government for tax evasion and illegally making oil deals with Iran during the Iran hostage crisis. He allegedly only escaped prison by going into exile from America. Mr. Rich was described in an obituary as an "infamous white-collar criminal". [1]

When Duncan became an MP, on the second try, in 1992, by standing in a safe Tory seat, he was quickly promoted to government office and soon after demoted when it was revealed that he had used irregular means to obtain a discounted purchase price of a council house. He did not live in one himself, allegedly due to the relatively low standard of living to be enjoyed in such properties, but had found an elderly neighbor who did and persuaded him to buy it, so that Duncan could re-purchase it soon afterwards, far below the market price. Duncan was made to resign as a minister, but not as an MP, and in the last two years of the John Major government, Duncan was again promoted to ministerial status.[2]

During the Tony Blair years, he was a Shadow minister on the opposition benches.

In 2005, he made a bid for leadership of the Conservative Party, and blamed his failure on the "Tory Taliban", implying that it was his homosexuality that was the problem. He compared the entirely peaceful, non-violent and socially responsible pro-family lobby in the Conservative Party to the violent and murderous Taliban, a public insult to his own party. He showed no reasoning to justify applying the name "Tombstone" to the Conservative pro-family group "Cornerstone". He alluded to homosexuality as a private behavior that somehow had no impact on other people or society, ignoring the many grave health issues and impact on children of the breakdown of the family system.[3]

In 2009, when the Daily Telegraph started to expose MPs' expenses claims, Duncan was revealed as having claimed more than £5,000 to spend on gardening at his second home. He insisted he had done nothing wrong, and went on to boast energetically on TV about how he had personally profited from the system of free mortgage payments for a second home. He called it a "great system" and at first refused to pay any of the money back. David Cameron, embarrassed, ordered him to repay it, and to apologise for his effusions. The system itself has now been abolished. [4] [5]

This happened at the height of the banking crisis, which caused great financial insecurity and hardship for the public, or "low-achievers" as Duncan was reported to call them. That did not prevent Duncan from what was described as prolonged and public whinging. He complained that MPs with their £64,000 salary, subsidized restaurants and champagne bars, paid secretarial staff and generous expense allowances, were expected "to live on rations and are treated like sh-t," a term he used publicly.[6]

Somewhat belatedly, Cameron demoted Duncan from the Shadow Cabinet. Yet, when the Coalition got into power in 2010, Duncan was given a ministerial job. During the invasion of Libya in 2011, he advised the Cameron government to cut off oil supplies to the government of Muammar Gaddafi and divert fuel to the rebels, thus encouraging the rise of Islamic fundamentalism. He sided with the people who murdered the American ambassador in the 2012 Benghazi attack. Assuring everyone that he was an expert on the oil business, he warned in The Times that oil prices of $200 a barrel are "on the cards" if anyone is "reckless and foments unrest."[7] By 2016, despite five years of unrest, oil prices were still $40 per barrel.

Duncan has made public attacks on Israel, and his dark accusations about a "powerful financial lobby" controlling America were condemned as anti-Semitic by leading Jewish groups.[8]

Duncan assumes a smiling, sunny image in public but a different personality flashes out from time to time. In April 2009, when appearing on the TV comedy show Have I Got News For You, he shocked the audience by saying that he would kill American beauty queen Carrie Prejean, who had, when asked to give her opinion on marriage, stated very civilly that she considered it was between a "man and a woman". Duncan's "joke" about murdering her even shocked other contestants on the show. [9] Many viewers complained to the viewers to complain to the BBC, the broadcasting watchdog OfCom and even the police. The incident was reported in the press. “Gay Tory Frontbencher Faces Police Probe after Miss Universe Death Threat Live on TV”. [10] The Guardian, a socialist and strongly pro-LGBT newspaper that is often described as a "Communist newspaper" by critics, excused Duncan's behavior by insisting it was a joke. Yet, under UK law, a death threat against a homosexual person for any reason would be a criminal offence carrying a jail term. Duncan also demonstrated his skills in intellectual debate by calling Miss Prejean, a qualified teacher, a "silly bitch". 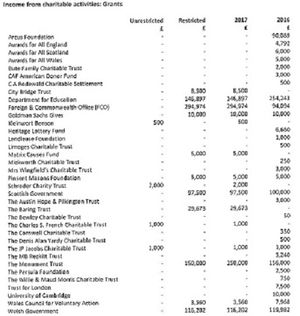 Since Duncan was put in charge of the Foreign and Commonwealth Office, it has made enormous donations out of public money to Stonewall UK the homosexual extremist group. In 2016 and 2017, these donations were nearly £300,000 per year, and are unprecedented. This funding enable Stonewall to meddle in the laws and government of foreign sovereign states, in a way that resembles a new colonialism.

Position on UK's membership of the EU

In March 2016, during the Brexit referendum campaign, Matthew Elliot, one of the leaders of the Leave campaign, revealed that Duncan had come to him and offered to lend his personal lustre to their side, but only on condition that he was given a star role. On Twitter, Elliot reported that:

11:00 PM - 23 Mar 2016 Matthew Elliott ‎@matthew_elliott Surprised @AlanDuncanMP supports Remain. He came to the@vote_leave HQ the other week asking for a Board position!

Leave declined and Duncan, who had previously for 20 years leaned to the Euro-sceptic side, went on to join the Far-Left Remain campaign. He wrote in the Daily Telegraph that: ‘I am one of those who many expected in the referendum campaign to be a fervent advocate of leaving. Until recently I also expected it of myself – even going so far as to speak to the Leave organisers at their HQ.’ [11] [12]

In 2016, Duncan reacted with anger and rudeness to the Panama Papers scandal, press exposure of tax-avoidance by the super-rich including the family of David Cameron. He snapped that the very idea of full disclosure of politicians' tax affairs would deter "high achievers" like himself from going into parliament and would fill the House of Commons with "low achievers". [13][14] One commentator asked "How does inheriting a large sum of money make you a "high achiever?" [15]

Support for Joe Biden in the 2020 United States presidential election