Andrew James Breitbart (/ˈbraɪtbɑːrt/; February 1, 1969 – March 1, 2012) was an American conservative publisher,[1] commentator for The Washington Times, author,[2] and occasional guest commentator[3][4][5] on various news programs, who served as an editor for the Drudge Report website.[6] He was a researcher for Arianna Huffington, and he was present at the launch of her web publication The Huffington Post.[7]

Breitbart owned the eponymous Breitbart.com, a news and opinion website. He played central roles in the Anthony Weiner sexting scandal, the resignation of Shirley Sherrod, and the ACORN 2009 undercover videos controversy. Commenters such as Nick Gillespie and Conor Friedersdorf have credited Breitbart with changing how people wrote about politics.[8][9]

Breitbart was born Andrew James Breitbart in Los Angeles, California on February 1, 1969.[10] He was the adopted son of Gerald and Arlene Breitbart, a restaurant owner and banker respectively, and grew up in Hollywood, California. He was raised Jewish (his adoptive mother had converted to Judaism when marrying his adoptive father).[11][12] He had a Bar Mitzvah.[13] He said that his birth certificate indicated his biological father was a folk singer.

While in high school, Breitbart worked as a pizza delivery driver; he sometimes delivered to celebrities such as Judge Reinhold.[14] He earned a B.A. in American studies from Tulane University in 1991, graduating with "no sense of [his] future whatsoever."[15] His early jobs included a stint at cable channel E! Entertainment Television, working for the company's online magazine, and some time in film production.[12]

Previously left-leaning in his politics, Breitbart changed his political views after experiencing an "epiphany" while watching the late 1991 confirmation hearings for Supreme Court justice Clarence Thomas, who was charged with sexual harassment. Breitbart later described himself as "a Reagan conservative" with libertarian sympathies.[1]

Listening to radio hosts like Rush Limbaugh helped Breitbart refine his political and philosophical positions, igniting an interest in learning that he had suppressed due to his distaste for the "nihilistic musings of dead critical theorists"[16] that had dominated his studies at Tulane. In this era Breitbart also read Camille Paglia's book Sexual Personae (1990), a massive survey of Western art, literature and culture from ancient Egypt to the 20th Century, which, he wrote, "made me realize how little I really had learned in college."[16]

In 1995 Breitbart saw the Drudge Report and was so impressed that he emailed Matt Drudge. Breitbart said, "I thought what he was doing was by far the coolest thing on the Internet. And I still do."[7] Breitbart described himself as "Matt Drudge's bitch"[17] and selected and posted links to other news wire sources. Later Matt Drudge introduced him to Arianna Huffington (when she was still a Republican)[12] and Breitbart subsequently assisted in the creation of the Huffington Post.[18]

In April 2011 Grand Central Publishing released Breitbart's book, Righteous Indignation: Excuse Me While I Save the World, in which he discussed his own political evolution and the part he took in the rise of new media, most notably at the Drudge Report and the Huffington Post.

In June 2011 Breitbart's websites broke the story that congressman Anthony Weiner was sending women revealing photographs of himself.[21]

Breitbart launched his first website as a news site; it is sometimes linked to by the Drudge Report and other websites. It has wire stories from the Associated Press, Reuters, Agence France-Presse, Fox News, PR Newswire, and U.S. Newswire, as well as direct links to a number of major international newspapers. Its political viewpoint as well as its audience runs to the right within the U.S. political spectrum.[22] In 2007, Breitbart launched a video blog, Breitbart.tv.[23] In 2011, Andrew Breitbart and his business partner Larry O'Connor were sued for defamation by Shirley Sherrod who had been fired after Breitbart posted a video of a speech given by Sherrod.[24] In July 2015, it was reported that Sherrod and Andrew Breitbart's estate had reached a tentative settlement.[25]

On October 22, 2009, Breitbart appeared on the C-SPAN program Washington Journal. He gave his opinions on the mainstream media, Hollywood, the Obama Administration and his personal political views, having heated debates with several callers.[1]

In the hours immediately following Senator Ted Kennedy's death, Breitbart called Kennedy a "villain," a "duplicitous bastard," a "prick"[28] and "a special pile of human excrement."[29][30]

In February 2010 Breitbart received the Reed Irvine Accuracy in Media Award during the Conservative Political Action Conference in Washington, D.C. During his acceptance speech, he responded directly to accusations by New York Times reporter Kate Zernike that Jason Mattera, a young conservative activist, had been using "racial tones" in his allusions to President Barack Obama, and had spoken in a "Chris Rock voice." From the podium, Breitbart called Zernike "a despicable human being" for having made such allegations about Mattera's New York accent.[31] At the same conference, Breitbart was also filmed saying to journalist Max Blumenthal that he found him to be "a jerk" and "a despicable human being" due to a blog entry posted by Blumenthal.[32]

Breitbart often appeared as a speaker at Tea Party movement events across the U.S. For example, Breitbart was a keynote speaker at the first National Tea Party Convention at Gaylord Opryland Hotel in Nashville on February 6, 2010.[33] 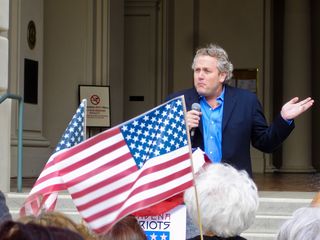 Andrew Breitbart gives a speech in Pasadena, California in a political rally against Proposition 1A on May Day

Breitbart later involved himself in a controversy over allegations of homophobic and racial slurs being used at a March 20, 2010, rally at the United States Capitol in Washington, D.C., by asserting that slurs were never used, and that "It was a set-up" by Nancy Pelosi and the Democratic Party. Breitbart offered to donate $100,000 to the United Negro College Fund "for any audio/video footage of the N-word being hurled," claiming that the several Congressmen made it up. Breitbart insisted Congressman John Lewis and several other witnesses were forced to lie, concluding that "Nancy Pelosi did a great disservice to a great civil rights icon by thrusting him out there to perform this mischievous task. His reputation is now on the line as a result of her desperation to take down the Tea Party movement."[34][35]

In February 2012 a YouTube video showed Breitbart yelling at Occupy D.C. protesters outside a Washington D.C. hotel hosting a Conservative Political Action Conference (CPAC). The video showed security escorting Breitbart back to the hotel while he told the protesters to "behave yourself," and alluding to reported assaults of women at Occupy encampments, he repeatedly yelled, "Stop raping people," and called the protestors "filthy, filthy, raping, murdering freaks!" David Carr said with the incident Breitbart had caused his last "viral storm on the Web."[36][37]

Breitbart appeared posthumously in Occupy Unmasked, a documentary film that contends that the Occupy Wall Street movement of "largely naïve students and legitimately concerned citizens looking for answers" is actually orchestrated by sinister, violent, and organized leaders with the purpose of not just changing, but destroying the American government.[38]

Breitbart was married to Susannah Bean, the daughter of actor Orson Bean and stepdaughter of actress Alley Mills, and had four children.[7][39]

On the morning of March 1, 2012, Breitbart collapsed suddenly while walking in Brentwood. He was rushed to Ronald Reagan UCLA Medical Center, where he later died at the age of 43.[40] He was 43 years old. An autopsy by the Los Angeles County Coroner's Office showed that he had cardiomyopathy and died of heart failure.[41] Conspiracy theories arose about his death,[42][43][44] but the toxicology report showed, "No prescription or illicit drugs were detected. The blood alcohol was .04%. No significant trauma was present and foul play is not suspected."[41] Bill Whittle, a personal friend of Breitbart, had said that Breitbart had a "serious heart attack" just months before his death.[45]

Various rumors have emerged that Andrew Breitbart was murdered by the US Federal government.

In 2013, philanthropist Dr. Jim Garrow claimed to have been a covert CIA agent who had recently been fired under Barack Obama's administration. Garrow claimed that Breitbart had been murdered due to having "bragged" the day before his death that he was going to release information that "would stop Obama's campaign" regarding Obama allegedly being backed by the government of Saudi Arabia.(Garrow also made the claim that author Tom Clancy and journalist Michael Hastings had been murdered by the US Federal government).[48]

During a 2016-2017 controversy known as "Pizzagate" in which allegations stemming from emails released by WikiLeaks emerged of a Washington, DC child sex trafficking ring being linked to John Podesta (former chairman of Hillary Clinton's 2016 presidential campaign), another Tweet which Breitbart had posted before his death accusing Podesta of covering up child sex trafficking fueled further speculation of Breitbart being a victim of foul play.[49][50]