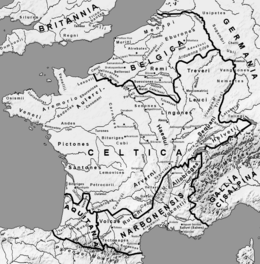 The Atrebates (singular Atrebas) were a Belgic tribe of Gaul and Britain before the Roman conquests. However it is possible that the Atrebates were a family of rulers (dynasty), as there is no evidence for a major migration from Belgium to Britain.

Name of the tribe

Cognate with Old Irish aittrebaid meaning 'inhabitant',[1][2] Atrebates comes from proto-Celtic *ad-treb-a-t-es, 'inhabitants'. The Celtic root is treb- 'building', 'home' (cf. Old Irish treb 'building', 'farm', Welsh tref 'town', Middle Breton treff 'city', toponyms in Tre-, Provençal trevar 'to live in a house or in a village'),[3] which has been linked [1] to the root of English thorpe, ‘village’.[1] Edith Wightman suggested that their name may be intended to mean the people of the (inland) earth to contrast with that of the neighbouring coastal Morini, "people of the sea".[4]

The Gaulish Atrebates lived in or around modern Artois in northern France. Their capital, Nemetocenna (later called Nemetacum or Nemetacon too. See Nemeton), is now the city of Arras, Pas-de-Calais.[5][6] The place-name Arras is the result of a phonetic evolution from Atrebates and replaced the original name in the Late Empire, according to a well-known tradition in Gaul (compare Paris, Amiens, Lisieux, Bayeux, etc.). The name Artois is the result of a different phonetic evolution from Atrebates.

In 57 BC, they were part of a Belgic military alliance in response to Julius Caesar's conquests elsewhere in Gaul, contributing 15,000 men.[7] Caesar took this build-up as a threat and marched against it, but the Belgae had the advantage of position and the result was a stand-off.[citation needed] When no battle was forthcoming, the Belgic alliance broke up, determining to gather to defend whichever tribe Caesar attacked. Caesar subsequently marched against several tribes and achieved their submission.

The Atrebates then joined with the Nervii and Viromandui and attacked Caesar at the battle of the Sabis, but were there defeated. After thus conquering the Atrebates, Caesar appointed one of their countrymen, Commius, as their king. Commius was involved in Caesar's two expeditions to Britain in 55 and 54 BC and negotiated the surrender of Cassivellaunus. In return for his loyalty, he was also given authority over the Morini. However, he later turned against the Romans and joined in the revolt led by Vercingetorix in 52 BC. After Vercingetorix's defeat at the Siege of Alesia, Commius had further confrontations with the Romans, negotiated a truce with Mark Antony, and ended up fleeing to Britain with a group of followers. However, he appears to have retained some influence in Gaul: coins of post-conquest date have been found stamped with his name, paired with either Garmanos or Carsicios, who may have been his sons or regents.[citation needed]

Ptolemy's 2nd century Geography refers to the "Atribati" living on the coast of Belgic Gaul, near the river Sequana (Seine), and names Metacum as one of their towns.

Commius soon established himself as king of the British Atrebates, a kingdom he may have founded. Their territory comprised modern Hampshire, West Sussex and Berkshire, centred on the capital Calleva Atrebatum (modern Silchester). They were bordered to the north by the Dobunni and Catuvellauni; to the east by the Regnenses; and to the south by the Belgae.

The settlement of the Atrebates in Britain was not a mass population movement. Archaeologist Barry Cunliffe argues that they "seem to have comprised a series of indigenous tribes, possibly with some intrusive Belgic element, given initial coherence by Commius".[citation needed] It is possible that the name "Atrebates", as with many "tribal" names in this period, referred only to the ruling house or dynasty and not to an ethnic group; Commius and his followers, after arriving in Britain, may have established a power-base and gradually expanded their sphere of influence, creating what was in effect a proto-state. However during Caesar's first expedition to Britain in 55 BC, after the Roman cavalry had been unable to cross the Channel, Commius was able to provide a small group of horsemen from his people, suggesting that he may have already had kin in Britain at that time.[citation needed] After this time, the Atrebates were recognized as a client kingdom of Rome.[citation needed]

The Celtic tribes of Southern Britain showing the Atrebates and their neighbours.

Coins stamped with Commius's name were issued from Calleva from ca. 30 BC to 20 BC. Some coins are stamped "COM COMMIOS": interpreting this as "Commius son of Commius", and considering the length of his apparent floruit, some have concluded that there were two kings, father and son, of the same name.[citation needed]

Three later kings of the British Atrebates name themselves on their coins as sons of Commius: Tincomarus, Eppillus and Verica. Tincomarus seems to have ruled jointly with his father from about 25 BC until Commius's death in about 20 BC. After that, Tincomarus ruled the northern part of the kingdom from Calleva, while Eppillus ruled the southern half from Noviomagus (Chichester). Numismatic and other archeological evidence suggests that Tincomarus took a more pro-Roman stance than his father, and John Creighton argues from the imagery on his coins that he was brought up as an obses (diplomatic hostage) in Rome under Augustus.

Augustus's Res Gestae mentions two British kings presenting themselves to him as supplicants, probably ca. 7 AD. The passage is damaged, but one is probably Tincomarus (the other is Dubnovellaunus, of either the Trinovantes or the Cantiaci). It appears Tincomarus was ousted by his brother, and from this point Epillus's coins are marked "Rex", indicating that he was recognised as king by Rome.

In about 15, Eppillus was succeeded by Verica (at about the same time, a king by the name of Eppillus appears as ruler of the Cantiaci in Kent). But Verica's kingdom was being pressed by the expansion of the Catuvellauni under Cunobelinus. Calleva fell to Cunobelinus's brother Epaticcus by about 25. Verica regained some territory following Epaticcus's death in about 35, but Cunobelinus's son Caratacus took over the campaign and by the early 40s the Atrebates were conquered. Verica fled to Rome, giving the new emperor Claudius the pretext for the Roman conquest of Britain.[citation needed]

After the Roman conquest, part of the Atrebates' lands were organized into the pro-Roman kingdom of the Regnenses under Tiberius Claudius Cogidubnus, who may have been Verica's son. The tribal territory was later organised as the civitates (administrative districts within a Roman province) of the Atrebates, Regnenses and possibly the Belgae.