From Infogalactic: the planetary knowledge core
Jump to: navigation, search
This article is about bellwethers in general. For Connie Willis's book, see Bellwether (novel).

A bellwether is one that leads or indicates trends.

The term is derived from the Middle English bellewether and refers to the practice of placing a bell around the neck of a castrated ram (a wether) leading his flock of sheep. The movements of the flock could be noted by hearing the bell before the flock was in sight.

In politics, the term is more often applied in the passive sense to describe a geographic region where political tendencies match in microcosm those of a wider area, such that the result of an election in the former region might predict the eventual result in the latter. In a Westminster-style election, for example, a constituency, the control of which tends frequently to change, can mirror in its popular vote the result on a national scale.

In the Canadian province of Ontario, Sarnia-Lambton (and its predecessor ridings) voted for the winning party in every federal election from 1963 until 2011. This streak was broken in 2015. St. Paul's has only elected three opposition MPs since it was created in 1935. Also in Ontario, Peterborough has been won by the party who has won the most seats overall in provincial elections since 1977. 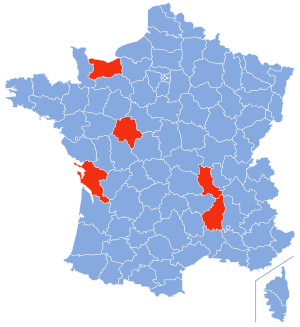 Map of bellwethers in France

Since the fifth republic president was elected by popular vote in 1965 up to 2012, five departments have always voted the chosen candidate in the second round: Ardeche, Calvados, Charente-Maritime, Indre-et-Loire and Loire. No region has done so.[1]

Since the creation of the Federal Republic of Germany (then West Germany) in 1949, the state where the leading party list vote (Zweitstimmen) matched the party of the subsequently chosen Chancellor more times is Schleswig-Holstein (with two misses: 1969 and 2005), followed by the state of Lower Saxony (with misses in 1949, 1969 and 2005).

Ireland has a proportional representation electoral system, in which politicians are elected by the single transferable vote. Bellwethers here can only be measured by the number of candidates from each side elected to Ireland's multiple-seat constituencies that elect an odd number of members. Between the 1981 general election and 2011 general election, Meath and its successors, Meath East and Meath West, have elected a majority of Fianna Fáil TDs in years when Fianna Fáil formed the government, and a majority of Fine Gael and Labour TDs when those parties formed the government.

In the Philippines, the winner of Philippine presidential election has won in Negros Oriental in all instances since 1935 except for 1961, and in Basilan since its creation in December 1973. Negros Oriental's streak that started in 1965 is currently the longest.

For vice presidential elections, Pangasinan has voted for the winner in all elections save for 1986.

Since democracy was restored in 1977 up to 2015 elections, three provinces have always voted for the winning party (Teruel, Zaragoza and Huesca) as one Autonomous Community has done (Aragon).[4]

According to Statistics Sweden, election results in Karlstad have been closest to the national results for three consecutive elections, a fact often highlighted by media through Gallup Polls showing voting intentions in the area.[5][6]

United Kingdom constituencies have been subject to frequent review since the late 1960s, particularly those of the House of Commons. Few constituencies are unchanged from one review to another. Therefore, true bellwethers are rare. However, it is possible to match new constituencies to old ones according to the destination of the bulk of the old electorate.

In the United Kingdom, the Dartford constituency has reflected the overall result in every General Election since 1964, the Basildon constituency has reflected every result since its creation in 1974 and the Loughborough constituency has elected an MP to the governing party since the February 1974 election. Gravesham and its predecessor Gravesend had a perfect record of voting for the winning party or the one with the largest share of the vote in every election from the First World War except for 2005, when they voted Conservative with Labour winning the election. Bristol North West is also considered something of a bellwether, with its voters having elected the candidate of the winning party in every election since October 1974, though it failed to do so on a number of occasions prior to this.

Luton South and its predecessors the Luton East and Luton constituencies have elected an MP from the winning party in each election since the 1951 general election until 2010.

Reading West and Amber Valley have elected a candidate from the same party as that holding the overall winning position in every UK General Election since the constituencies were created in 1983.

In the 1999, 2003 and 2007 Scottish Parliament elections, the constituencies of Cunninghame North, Dundee West, Edinburgh East & Musselburgh, Fife Central, Glasgow Govan, Kilmarnock & Loudoun, Livingston, Stirling, Western Isles all elected an MSP from the party which won the plurality of seats in the election overall. Following boundary changes for the 2011 election, the successor constituencies to all the above seats maintained this trend.

In the United States, Missouri was often referred to as the Missouri bellwether as it produced the same outcome as the national results in the presidential election 96.2% of the time for the century between 1904 and 2004, only missing 1956. It did not match the national result in 2008 or 2012.

The American bellwether states (with respect to presidential elections) currently are:

In the stock market, a bellwether (barometer stock in the UK) is a stock that is believed to be a leading indicator of the direction of a sector, industry or market as a whole. Bellwether stocks are often used to determine the direction in which an industry or market is headed in the short term.[21] JPMorgan Chase is an example of a bellwether stock. As one of the major banks in the United States, it sets the tone for the rest of the industry. JPMorgan Chase also has contracts with companies in other industries, so its performance is reflected in other sectors of the market. Cognizant is similarly a bellwether for Technology stocks in the Indian markets BSE and NSE.

In sociology, the term is applied in the active sense to a person or group of people who tend to create, influence, or set trends.

Trends in expenditure in the UK advertising and marketing industry are monitored in the quarterly Bellwether Report, published by the Institute of Practitioners in Advertising (IPA).