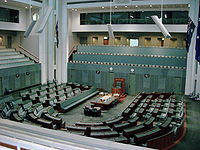 Inside the House of Representatives

The present Parliament is the 44th Federal Parliament of Australia. The most recent federal election was held on 7 September 2013 and the new House first sat on 12 November 2013. The Liberal/National Coalition won 90 seats out of 150 and formed the government. The Labor Party holds 55 seats and forms the opposition. The Australian Greens, Palmer United Party and Katter's Australian Party each hold a single seat, while the remaining two are held by independents.[1] Unless an election is called earlier, the term of the House will expire on 11 November 2016.

The House of Representatives currently consists of 150 members, elected by and who represent single member districts, known as electoral divisions (commonly referred to as "electorates" or "seats"). The number of members is not fixed, but can vary with boundary changes resulting from electoral redistributions, which are required on a regular basis. The most recent overall increase in the size of the House, which came into effect at the 1984 election, increased the number of members from 125 to 148. It reduced to 147 at the 1993 election, returned to 148 at the 1996 election, and has been 150 since the 2001 election. Each division elects one member using compulsory preferential voting.

The Commonwealth of Australia Constitution Act (Imp.) of 1900 established the House of Representatives as part of the new system of dominion government in newly federated Australia. The House is presided over by the Speaker. Members of the House are elected from single member electorates (geographic districts, commonly referred to as "seats" but officially known as "Divisions of the Australian House of Representatives"). One vote one value legislation requires all electorates to have approximately the same number of voters with a maximum 10% variation. However, the baseline quota for the number of voters in an electorate is determined by the number of voters in the state in which that electorate is found. Consequently, the electorates of the smallest states and territories have more variation in the number of voters in their electorates, with the smallest holding around 60,000 voters and the largest holding around 120,000 voters. Meanwhile, the largest states have electorates with more equal voter numbers, with most electorates holding 85,000 to 100,000 voters. Voting is by the 'preferential system', also known as instant-runoff voting. A full allocation of preferences is required for a vote to be considered formal. This allows for a calculation of the two-party-preferred vote.

According to the Constitution, the powers of both houses are nearly equal, with the consent of both houses needed to pass legislation. The difference mostly relates to taxation legislation. In practice, by convention, the person who can control a majority of votes in the lower house is invited by the Governor-General to form the Government. In practice that means that the leader of the party (or coalition of parties) with a majority of members in the House becomes the Prime Minister, who then can nominate other elected members of the government party in both the House and the Senate to become ministers responsible for various portfolios and administer government departments. Bills appropriating money (supply bills) can only be introduced in the lower house and thus only the party with a majority in the lower house can govern. In the current Australian party system, this ensures that virtually all contentious votes are along party lines, and the Government always has a majority in those votes.

The Opposition party's main role in the House is to present arguments against the Government's policies and legislation where appropriate, and attempt to hold the Government accountable as much as possible by asking questions of importance during Question Time and during debates on legislation. By contrast, the only period in recent times during which the government of the day has had a majority in the Senate was from July 2005 (following the 2004 election) to December 2007 (following the Coalition's defeat at the federal election that year). Hence, votes in the Senate are usually more meaningful. The House's well-established committee system is not always as prominent as the Senate committee system because of the frequent lack of Senate majority.

In a reflection of the United Kingdom House of Commons, the predominant colour of the furnishings in the House of Representatives is green. However, the colour was tinted slightly in the new Parliament House (opened 1988) to suggest the colour of eucalyptus trees. Also, unlike the House of Commons, the seating arrangement of the crossbench is curved, similar to the curved seating arrangement of the United States House of Representatives. This suggests a more collaborative, and less oppositional, system than in the United Kingdom parliament (where all members of parliament are seated facing the opposite side).[2]

Australian parliaments are notoriously rowdy, with MPs often trading colourful insults. As a result, the Speaker often has to use the disciplinary powers granted to him or her under Standing Orders.[3]

Since 2015, Australian Federal Police officers armed with assault rifles have been present in both chambers of the Federal Parliament.[4]

The Federation Chamber was created in 1994 as the Main Committee, to relieve some of the burden of the House: different matters can be processed in the House at large and in the Federation Chamber, as they sit simultaneously. It is designed to be less formal, with a quorum of only three members: the Deputy Speaker of the House, one government member, and one non-government member. Decisions must be unanimous: any divided decision sends the question back to the House at large.

The Federation Chamber is housed in one of the House's committee rooms; the room is customised for this purpose and is laid out to resemble the House chamber.[7]

Due to the unique role of what was then called the Main Committee, proposals were made to rename the body to avoid confusion with other parliamentary committees, including "Second Chamber"[8] and "Federation Chamber".[9] The House of Representatives later adopted the latter proposal.[10]

The concept of a parallel body to expedite Parliamentary business, based on the Australian Federation Chamber, was mentioned in a 1998 British House of Commons report,[11] which led to the creation of that body's parallel chamber Westminster Hall.[12]

The composition of the House

The 2013 election was held on 7 September 2013, which resulted in the victory of the Coalition led by Tony Abbott with a 90–55 margin, thereby ending the minority government held by the previous Labor Party government.

Primary, TPP and seat results since 1937