William James "Billy" Collins (born March 22, 1941) is an American poet, appointed as Poet Laureate of the United States from 2001 to 2003.[1][2] He is a Distinguished Professor at Lehman College of the City University of New York and is the Senior Distinguished Fellow of the Winter Park Institute, Florida. Collins was recognized as a Literary Lion of the New York Public Library (1992) and selected as the New York State Poet for 2004 through 2006. He is (in 2015) a teacher in the MFA program at Stony Brook Southampton.

Collins was born in Manhattan to William and Katherine Collins and grew up in Queens and White Plains. Katherine Collins was a nurse who stopped working to raise the couple's only child. Mrs. Collins had the ability to recite verses on almost any subject, which she often did, and cultivated in her young son the love of words, both written and spoken. Billy Collins attended Archbishop Stepinac High School in White Plains and received a B.A. in English from the College of the Holy Cross in 1963; he received his M.A. and Ph.D in Romantic Poetry from the University of California, Riverside. His professors at Riverside included Victorian scholar and poet Robert Peters.[3][4] In 1975 Collins founded The Mid-Atlantic Review with his friend Walter Blanco and Steve Bailey.[5] 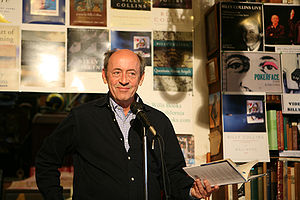 Collins is a Distinguished Professor of English at Lehman College in the Bronx, where he joined the faculty in 1968. Additionally, he is a founding Advisory Board member of the CUNY Institute for Irish-American Studies at Lehman College. He also has taught and served as a visiting writer at Sarah Lawrence College in Bronxville, New York as well as teaching workshops across the U.S. and in Ireland. Collins is a member of the faculty of SUNY Stony Brook Southampton,[6] where (2015) he teaches poetry workshops. Collins was named U.S. Poet Laureate in 2001 and held the title until 2003. Collins served as Poet Laureate for the State of New York from 2004 until 2006. Collins enjoyed a stint with the Winter Park Institute in Winter Park, Florida, an affiliate of Rollins College. Named the Senior Distinguished Fellow at the Winter Park Institute, his affiliation that began in 2008 ended in 2015 when the college's interim president, Craig MacAllaster, emailed Collins saying his contract would not be renewed because of budget issues. Collins invited friends of his to be guests at the Institute, including such luminaries as Pulitzer Prize winners Jules Feiffer and Marsha Norman, Paul Simon, Sir Paul McCartney, and Jane Pauley.[7] In 2012, Collins became Poetry Consultant for Smithsonian Magazine. During the summer of 2013, Collins guest hosted Garrison Keillor's popular daily radio broadcast, The Writer's Alamanac, on NPR. Collins has been invited to read at The White House three times—in 2001, 2011, and 2014. In 2014 he traveled to Russia as a cultural emissary of the U.S. State Department. In 2013 and 2015, Collins toured with the singer-songwriter Aimee Mann, performing on stage with her in a music-poetry-conversation format. Collins and Paul Simon have engaged in four onstage conversations about poetry, music, and lyrics, starting in 2008. The conversations were held in 2008 at New York's 92nd Street Y[8] and The Winter Park Institute,[9] in 2013 at the Chautauqua Institution,[10] and in 2013 at Emory University as part of the Richard Ellman Lectures in Modern Literature, where Simon was the 2013 Richard Ellman Lecturer.[11] Collins presented a TED talk, Everyday moments, caught in time at TED 2012. Collins, as one of the Favorite 100 TED speakers of all time, was invited to give another TED talk at TED 2014 in Vancouver, Canada.[12]

As U.S. Poet Laureate, Collins read his poem The Names at a special joint session of the United States Congress on September 6, 2002, held to remember the victims of the 9/11 attacks.[13] Though, unlike their British counterparts, U.S. poets laureate are not asked or expected to write occasional poetry, Collins was asked by the Librarian of Congress to write a poem especially for that event. Collins initially refused to read "The Names" in public, though he has read it two times in public since 2002. He vowed not to include it in any of his books, refusing to capitalize on the 9/11 attacks. However, "The Names" was included in the The Poets Laureate Anthology put out by the Library of Congress, for which Collins wrote the foreword. The only book-published version of "The Names", it contains a number of regrettable typographical errors. The poem also appeared in the New York Times, September 6, 2002. Collins finally agreed to include "The Names" in his new and selected volume Aimless Love in 2013. As Poet Laureate, Collins instituted the program Poetry 180 for high schools. Collins chose 180 poems for the program and the accompanying book, Poetry 180: A Turning Back to Poetry—one for each day of the school year. Collins edited a second anthology, 180 More Extraordinary Poems for Every Day to refresh the supply of available poems. The program is online, and poems are available there for no charge.[14]

In 1997, Collins recorded The Best Cigarette, a collection of 34 of his poems, that would become a bestseller. In 2005, the CD was re-released under a Creative Commons license, allowing free, non-commercial distribution of the recording. He also recorded two of his poems for the audio versions of Garrison Keillor's collection Good Poems (2002). Collins has appeared on Keillor's radio show, A Prairie Home Companion, numerous times, where he gained a portion of his large following. In 2005, Collins recorded Billy Collins Live: A Performance[15] in New York City. Collins was introduced by his friend, actor Bill Murray.

Billy Collins has been called "The most popular poet in America" by the New York Times.[16] When he moved from the University of Pittsburgh Press to Random House, the advance he received shocked the poetry world—a six-figure sum for a three-book deal, virtually unheard of in poetry.[17] The deal secured for Collins through his literary agent, Chris Calhoun, then of Sterling Lord Literistic, with the editor Daniel Menaker, remained the talk of the poetry world, and indeed the literary world, for quite some time.[18]

Over the years, the U.S. magazine Poetry has awarded Collins several prizes in recognition of poems they publish. During the 1990s, Collins won five such prizes. The magazine also selected him as "Poet of the Year" in 1994. In 2005 Collins was the first annual recipient of its Mark Twain Prize for Humor in Poetry. He has received fellowships from the National Endowment for the Arts, the New York Foundation for the Arts and in 1993, from the John Simon Guggenheim Foundation.

One of his most critically acclaimed works, "Fishing on the Susquehanna in July"[19] has been added to the preserved works of the United States Native American literary registry as being deemed a culturally significant poem. The poem has been included on national Advance Placement exams for high school students.

In 2012, Collins appeared as himself in an episode of the PBS animated series Martha Speaks.

Collins is on the editorial board at The Alaska Quarterly Review. Most recently he contributed to the 30th anniversary edition.[20][21] He is on the advisory board at the Southern Review, and is similarly named in other journals.

Other Awards include these from Poetry magazine: