Bohumil Hrabal was born in Brno (Balbínova ul. 47, Židenice district [1]) in what was then the province of Moravia in the Austro-Hungarian empire to an unmarried mother, Marie Božena Kiliánová (b. 1894-d. 10 February 1970). According to the organisers of a recent Hrabal exhibition in Brno, his biological father was “probably” Bohumil Blecha (b. 1893-d, 1970), who was a year older than Marie, a friend from the neighbourhood and the son of a teacher. Marie’s parents opposed the idea of their daughter marrying Blecha, who was about to enter the imperial army[2] [2]. Blecha served on the Italian front, before being invalided out of service[3] [3]. Blecha’s daughter, Drahomíra Blechová-Kalvodová, says her father told her when she was 18 that Hrabal was her half-brother. Bohumil and his biological father never met formally, according to Blechová-Kalvodová.[3] Hrabal and Blechová-Kalvodová met twice; a dedication in a picture from 1994 says: "To sister Drahomíra, Hrabal! 28. 3. 94."[3]

Hrabal was baptised Bohumil František Kilián. Until the age of three, he lived principally with his grandparents, Kateřina Kiliánová (born Bartlová)(d. 1950)[2] [4] and Tomáš Kilián (d. 1925, a descendant of a French soldier injured at the battle of Austerlitz, on the outskirts of Brno),[4][5] in Brno while his mother worked in Polná as an assistant book-keeper in the town's brewery. She worked there with her future husband, František Hrabal (b. 1889-d. 5 June 1966); one František Hrabal was listed as Bohumil's godfather when he was baptised on 4 February 1914, but František was also the first name of Bohumil's future step-grandfather, a soft-drinks trader. František Hrabal, Hrabal’s stepfather, was a friend of Hrabal’s probable biological father, according to Blechová-Kalvodová.

Marie and František married in February 1917, shortly before Bohumil's second birthday. Hrabal's half-brother, Břetislav Josef Hrabal, was born later that year (b. 25 September 1916-d. 30 May 1985); Břetislav (Slávek) is said to have been an excellent raconteur[2] [5]. The family moved in August 1919 to Nymburk, a small town on the banks of the Labe (Elbe), where František Hrabal became the brewery's manager [6]. Both of Hrabal's parents were active in amateur dramatics.

Hrabal’s uncle was Bohuslav Kilián (1892–1942), a lawyer, journalist and publisher of the cultural magazines Salon and Měsíc (the latter had a German version, Der Monat, that was distributed throughout Europe, but not in Nazi Germany).[6][7]

In 1920, Hrabal began at the primary school in Nymburk. In September 1925, he spent one year at a grammar school in Brno (now Gymnázium třída Kapitána Jaroše, which was later attended by another famous Czech writer, Milan Kundera). He failed the first year; he later attended a technical secondary school in Nymburk. There too he struggled to concentrate on his studies, despite extra classes given to him by his uncle[2] [7].

In June 1934, Hrabal left school with a certificate that said he could be considered for a place at university on a technical course. Hrabal took private classes in Latin for a year, passing a state exam in the town of Český Brod with an 'adequate' grade on 3 October 1935. Four days later, on 7 October 1935, he registered at Prague's Charles University to study for a Law degree. He completed the course only in March 1946[8] as Czech universities were closed during the Nazi occupation, starting in November 1939.[9] During the war, he worked as railway labourer and dispatcher in Kostomlaty, near Nymburk, an experience reflected in one of his best-known works Ostře sledované vlaky (Closely Observed Trains). He worked variously as an insurance agent (September 1946-July 1947), a travelling salesman (September 1947 – 1949) and as a manual labourer alongside the graphic artist Vladimír Boudník in the Kladno steelworks (1949–1952), an experience that inspired the "hyper-realist" texts he was writing at the time. After a serious injury, he worked in a recycling mill in the Prague district of Libeň as a paper-packer (October 1954-February 1959), before working as a stagehand (18 February 1959 – 1 January 1962) at the S. K. Neumann Theatre (Divadlo S. K. Neumanna, now Divadlo pod Palmovkou). 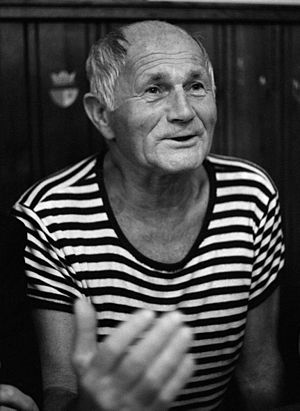 Hrabal began as a poet, producing a collection of lyrical poetry in 1948 (Ztracená ulička). It was withdrawn from circulation when the communist regime was established. In the early 1950s, Hrabal was a member of an underground literary group run by Jiří Kolář, an artist, poet, critic and central figure in Czechoslovak culture.[10] (Another member of the group was the novelist Josef Škvorecký.) Hrabal produced stories for the group, but did not seek publication.

Two stories by Hrabal (Hovory lidí) appeared in 1956 as a supplement in the annual Zprávy spolku českých bibliofilů (Report of the Association of Czech Bibliophiles). It had a print-run of 250. Hrabal's first book was withdrawn a week before publication, in 1959. It was eventually published in 1963, as Perlička na dně (Pearl on the Bottom). In the same year, he became a writer by profession. Taneční hodiny pro starší a pokročilé (Dancing Lessons for the Advanced in Age) followed in 1964 and Ostře sledované vlaky (Closely Observed Trains) in 1965.

After the invasion of Czechoslovakia by troops from the Warsaw Pact, Hrabal was banned from publishing. In 1970, two of his books – Domácí úkoly and Poupata – were banned, after they had been printed and bound but before they were distributed. In the following years, he published several of his best known in underground (samizdat) editions (including Městečko, kde se zastavil čas [The Little Town Where Time Stood Still] and Obsluhoval jsem anglického krále [I Served the King of England]).

In 1975, Hrabal gave an interview to the publication Tvorba in which he made ‘self-critical’ comments that enabled some of his work to appear in print. Some of the comments indicate editorial insertions (“as a Czech writer I feel connected to the Czech people, with its Socialist past and future [italics added]”). Some young dissidents were incensed – some burnt his books and the singer Karel Kryl called him a “whore”.[11] Hrabal's decision enabled at least some of his work to reach the broader Czechoslovak readership. Many of his works, though, were printed only in underground editions abroad, including arguably his most powerful novel Příliš hlučná samota (Too Loud a Solitude).

Hrabal steered clear of political engagement; he was not a signatory of Charter 77, a protest against the communist regime drawn up principally by Václav Havel, Jan Patočka, Zdeněk Mlynář, Jiří Hájek, and Pavel Kohout.

Hrabal's two best-known novels are Closely Observed Trains (Ostře sledované vlaky) (1965) and I Served the King of England (Obsluhoval jsem anglického krále), both of which were made into movies by the Czech director, Jiří Menzel (1966 and 2006, respectively). Hrabal worked closely with Menzel on the script for Closely Observed Trains which won an Oscar in 1968. The two men became close friends and were to collaborate on other film projects, including the long-banned Larks on a String.

Hrabal was a great raconteur, much of his story-telling taking place in his favourite pub, U zlatého tygra (At the Golden Tiger) on Husova Street in Prague. He met the Czech President Václav Havel, the American President Bill Clinton and the US ambassador to the UN Madeleine Albright at U zlatého tygra on 11 January 1994.

He died when he fell from a window on the fifth floor of the Bulovka hospital in Prague where he was apparently trying to feed pigeons. It was noted that Hrabal lived on the fifth floor of his apartment building and that suicides by leaping from a fifth-floor window were mentioned in several of his books.[citation needed] He was buried in his family's crypt in a cemetery in Hradištko. As he wished, he was buried in an oak coffin with the inscription Pivovar Polná (Polná Brewery), the brewery where his mother and stepfather met.

He wrote in an expressive, highly visual style. He affected the use of long sentences; in fact his works Dancing Lessons for the Advanced in Age (Taneční hodiny pro starší a pokročilé) (1964) and Vita Nuova (1987) consist of one single sentence. Political quandaries and their concomitant moral ambiguities are a recurrent theme. Many of Hrabal's characters are portrayed as "wise fools" — simpletons with occasional inadvertently profound thoughts — who are also given to coarse humour, lewdness, and a determination to survive and enjoy oneself despite harsh circumstances.

Much of the impact of Hrabal's writing derives from his juxtaposition of the beauty and cruelty found in everyday life. Vivid depictions of pain human beings casually inflict on animals (as in the scene where families of mice are caught in a paper compactor) symbolise the pervasiveness of cruelty among human beings. The adult human world is revealed as terrifying, and, in the end, perhaps the only sane philosophy is a line delivered in Closely Observed Trains: "You should have stayed home on your arse".[citation needed] His characterisations also can be comic, giving his prose a baroque/mediaeval tinge.

Along with Jaroslav Hašek, Karel Čapek and Milan Kundera — likewise imaginative and amusing satirists — he is considered one of the greatest Czech writers of the 20th century. Author Ewa Mazierska compares his work to Ladislav Grosman in that his literary works typically contained the perfect mixture of comedy and tragedy.[12] His works have been translated into 27 languages.

Complete works edition in 19 volumes was published in the 1990s by Pražská imaginace. 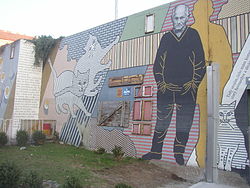 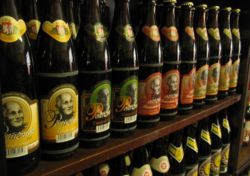 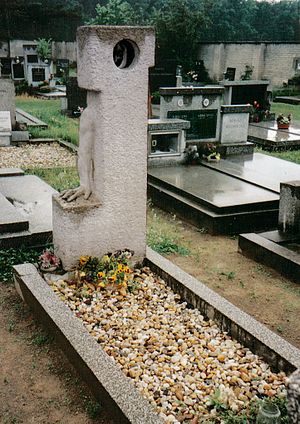