Cable Street is a road in the East End of London, England, with several historic landmarks nearby.

It was made famous by the Battle of Cable Street in 1936.

Cable Street runs between the edge of London's financial district the City of London, and Limehouse, parallel to, and south of, the Docklands Light Railway and Commercial Road, and north of The Highway.

The area is close to Wapping and Shadwell Basin to the south, Tower Hill to the west, and Whitechapel and Stepney to the north. Since many Londoners define their locality by the nearest London Underground stations, the Cable Street area is often referred to as Shadwell.

The street is in the London Borough of Tower Hamlets, in postal district E1. It lies within the parliamentary constituencies of Bethnal Green and Bow and Poplar and Canning Town, currently represented by Rushanara Ali and Jim Fitzpatrick, both of the Labour party.

Cable Street started as a straight path along which hemp ropes were twisted into ships cables (i.e. ropes). These supplied the many ships that would anchor in the nearby Pool of London, between London Bridge and Wapping and Rotherhithe. Many other "rope walks" can be seen on later maps, showing how demand for ropes grew as shipping increased.

Until Victorian times, the current Cable Street had different names for each of its sections. From west to east these ran: Cable Street, Knock Fergus, New Road, Back Lane, Blue Gate Fields, Sun Tavern Fields, and Brook Street.

Knock Fergus may have been a reference to the large numbers of Irish residents there then, but the name is old - it is found in the St. Dunstan Stepney registers in the early 1600s.

From Victorian times through to the 1950s, Cable Street had a reputation for cheap lodgings, brothels, drinking inns and opium dens.

The last occasion in England when a stake was hammered through a sinner’s heart at an official burial, took place at the junction of Cable Street and Cannon Street Road: John Williams was found hanged in his cell, after being arrested as a suspect in the Ratcliff Highway murders. Local people went along with the claim that he had committed suicide, from guilt of the crimes. At the time, 1812, suicide was considered to be sinful, and justified him being buried upside down with a stake through his heart. His skull was found when new gas mains were being laid in the 1960s, and was on display for many years in The Crown and Dolphin pub opposite. 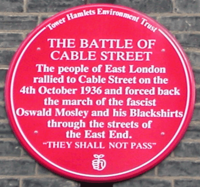 On 4 October 1936 a violent confrontation between the Metropolitan Police and local communities on the street was later named the 'Battle of Cable Street'. Communist, anarchist, labour and Jewish groups joined with locals to resist a planned march through the East End by Oswald Mosley's British Union of Fascists. A bus was overturned and used as a barricade, Mosley's car was attacked with bricks, and there was some of the most violent hand-to-hand fighting ever seen in London. The march was eventually abandoned. A large mural on St. George's Town Hall, next to Library Place, depicts scenes from the day. A red plaque at Cable Street's junction with Dock Street commemorates the incident.

Listed from west to east:

Vehicular traffic is restricted to travel one-way along the whole street, though the direction varies. It is mostly west-bound, but it is east-bound east of Brodlove Lane (itself one-way north-bound). It lies outside of the London congestion charge zone (CCZ).

London Cycle Superhighway 3 runs the length of Cable Street in the form of a two-way segregated cycle track, continuing west into Royal Mint Street (its western terminus). This is well-used by cyclists, especially those commuting to the City and Docklands.

London Buses routes 100 and D3 both pass west-bound through the central part of Cable Street:

People associated with the area:

Members of Parliament, for Bethnal Green and Bow :

Members of Parliament, for Poplar and Canning Town :

north of Cable Street starting from the west:

south of Cable Street, starting from the west: