From Infogalactic: the planetary knowledge core
Jump to: navigation, search
For the negotiations leading to the 1979 Egypt–Israel Peace Treaty, see Camp David Accords. For the summit in 2000, see 2000 Camp David Summit. 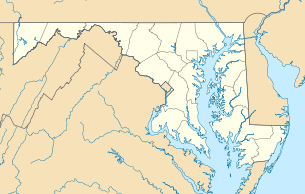 Camp David is the country retreat of the President of the United States. It is located in wooded hills about 62 miles (100 km) north-northwest of Washington, D.C., in Catoctin Mountain Park near Thurmont, Maryland.[1][2][3] It is officially known as Naval Support Facility Thurmont and because it is technically a military installation, staffing is primarily provided by the U.S. Navy and the U.S. Marine Corps.

First known as Hi-Catoctin, Camp David was built as a camp for federal government agents and their families by the WPA. Construction started in 1935 and was completed in 1938.[4] In 1942, Franklin D. Roosevelt converted it to a presidential retreat and renamed it "Shangri-La" (for the fictional Himalayan paradise). Camp David received its present name from Dwight D. Eisenhower, in honor of his father and grandson, both named David.[5]

Camp David is not open to the public, and Catoctin Mountain Park does not indicate the location of Camp David on park maps due to privacy and security concerns.[3]

Every president since Franklin D. Roosevelt has made use of Camp David.

On July 2, 2011, an F-15 intercepted a small two-seat passenger plane flying near Camp David, when President Obama was in residence. The civilian aircraft, which was out of radio communication, was intercepted approximately 6 miles (10 km) from the presidential retreat. The F-15 escorted the aircraft out of the area, and it landed in nearby Hagerstown, Maryland, without incident. The civilian plane's occupants were flying between two Maryland towns and were released without charge.[17]

On July 10, 2011, an F-15 intercepted another small two-seat passenger plane flying near Camp David when President Barack Obama was again in residence; a total of three planes were intercepted over that July 9 weekend.[18]