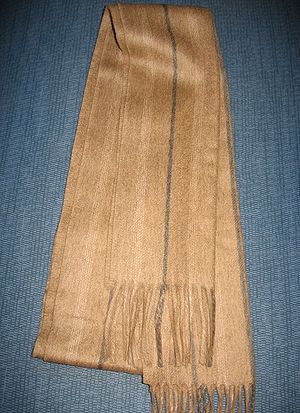 Cashmere wool, usually simply known as cashmere, is a fiber obtained from cashmere goats and other types of goat. Common usage defines the fiber as a wool but in fact it is a hair, and this is what gives it its unique characteristics as compared to sheep's wool. The word cashmere is an old spelling of the Kashmir region in northern India. Cashmere is fine in texture, strong, light, and soft. Garments made from it provide excellent insulation, approximately three times that of sheep wool.[1] Cashmere is also softer than regular wool.[2]

In the United States, under the U.S. Wool Products Labeling Act of 1939, as amended, (15 U. S. Code Section 68b(a)(6)), states that a wool or textile product may be labelled as containing cashmere only if: 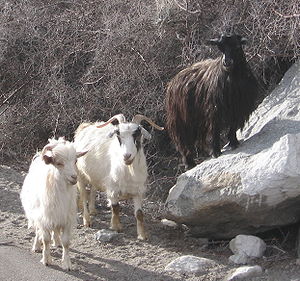 Cashmere wool fiber for clothing and other textile articles is obtained from the neck region of Cashmere and other goats. Historically, fine-haired Cashmere goats have been called Capra hircus laniger, as if they were a subspecies of the domestic goat Capra hircus. However, they are now more commonly considered part of the domestic goat subspecies Capra aegagrus hircus. Cashmere goats produce a double fleece that consists of a fine, soft undercoat or underdown of hair mingled with a straighter and much coarser outer coating of hair called guard hair. For the fine underdown to be sold and processed further, it must be de-haired. De-hairing is a mechanical process that separates the coarse hairs from the fine hair. After de-hairing, the resulting "cashmere" is ready to be dyed and converted into textile yarn, fabrics and garments. 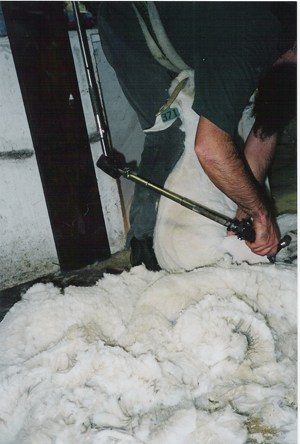 Cashmere is collected during the spring moulting season when the goats naturally shed their winter coat. In the Northern Hemisphere, the goats moult as early as March and as late as May.

In some regions, the mixed mass of down and coarse hair is removed by hand with a coarse comb that pulls tufts of fiber from the animal as the comb is raked through the fleece. The collected fiber then has a higher yield of pure cashmere after the fiber has been washed and dehaired. The long, coarse guard hair is then typically clipped from the animal and is often used for brushes, interfacings and other non-apparel uses. Animals in Iran, Afghanistan, New Zealand, and Australia are typically shorn of their fleece, resulting in a higher coarse hair content and lower pure cashmere yield. In America, the most popular method is combing. The process takes up to two weeks, but with a trained eye for when the fiber is releasing, it is possible to comb the fibers out in about a week.

China has become the largest producer of raw cashmere and their clip is estimated at 10,000 metric tons per year (in hair). Mongolia follows with 7,400 tons (in hair) as of 2014,[4] while Afghanistan, Iran, Turkey, Kyrgyzstan[5] and other Central Asian Republics produce lesser amounts. The annual world clip is estimated to be between 15,000 and 20,000 tons (13,605 and 18,140 tonnes) (in hair). "Pure cashmere", resulting from removing animal grease, dirt and coarse hairs from the fleece, is estimated at about 6,500 tons (5,895 tonnes). Ultra-fine Cashmere or Pashmina is still produced by communities in Indian Kashmir but its rarity and high-price, along with political instability in the region, make it very hard to source and to regulate quality. It is estimated that on average yearly production per goat is 150 grams (about 1/3 lb).

Pure cashmere can be dyed and spun into yarns and knitted into jumpers (sweaters), hats, gloves, socks and other clothing, or woven into fabrics then cut and assembled into garments such as outer coats, jackets, trousers (pants), pajamas, scarves, blankets, and other items. Fabric and garment producers in Scotland, Italy, and Japan have long been known as market leaders.

Cashmere has been manufactured in Mongolia, Nepal and Kashmir in India for thousands of years. Famous shawls are the jamavar with the famous paisley pattern. The fiber is also known as pashm (Persian for wool) or pashmina (Persian/Urdu word derived from Pashm) for its use in the handmade shawls of Kashmir.[6] References to woolen shawls appear in texts surviving from between the 3rd century BC and the 11th century AD.[7] However, the founder of the cashmere wool industry is traditionally thought to have been the 15th-century ruler of Kashmir, Zain-ul-Abidin, who introduced weavers from Turkestan.[7] Other sources consider cashmere crafts were introduced by Mir Sayyid Ali Hamadani.[8] In 14th-century Mir Ali Hamdani came to Kashmir along with 700 craftsmen from parts of Persia[9] when Mir Ali Hamadani came to Ladakh, home land of cashmere goats, for the first time in history he found that the Ladakhi goats produced soft wool. He took some wool and made socks and gave them as a gift to the king of Kashmir, sultan Kutabdin. Afterwards Hamadani suggested to the king that they start a shawl weaving industry in Kashmir using this wool.[10] The United Nations specialized agency UNESCO reported in 2014 that Ali Hamadani was one of the principal historical figures who shaped the culture of Kashmir, both architecturally and also through the flourishing of arts and crafts and hence economy in Kashmir. The skills and knowledge that he brought to Kashmir gave rise to an entire industry.[11]

In the 18th and early 19th centuries, kashmir (then called cashmere by the British) had a thriving industry producing shawls from goat down imported from Tibet and Tartary through Ladakh. The down trade was controlled by treaties signed as a result of previous wars.[12] The shawls were introduced into Western Europe when the General in Chief of the French campaign in Egypt (1799–1802) sent one to Paris. The shawl's arrival is said to have created an immediate sensation and plans were put in place to start manufacturing the product in France.[13]

Trading in commercial quantities of raw cashmere between Asia and Europe began with Valerie Audresset SA, Louviers, France claiming to be the first European company to commercially spin cashmere.[14] The down was imported from Tibet through Kasan the capital of the Russian province Volga and was used in France to create imitation woven shawls. Unlike the Kashmir shawls, the French shawls had a different pattern on each side.[13] The imported cashmere was spread out on large sieves and beaten with sticks to open the fibers and clear away the dirt. After opening, the cashmere was washed and children removed the coarse hair. The down was then carded and combed using the same methods used for worsted spinning.[15]

In 1799 at his factory in Reims, William-Louis Ternaux, the leading woolens manufacturer in France under Napoleon, began to produce imitation India shawls (cachemires) using the wool of Spanish merino sheep. By 1811, with government assistance, Ternaux also began experimenting with the production of real India shawls using what he called laine de Perse, i.e., the down (duvet) of Tibetan-cashmere goats. In 1818, Ternaux resolved to help establish herds of cashmere goats in France. A famous expedition to Persia, led by the orientalist and diplomat Pierre Amédée Jaubert,was organized to be financed in part by the French government. Of the acquired herd of 1,500 animals, only 256 arrived safely in the spring of 1819 at Marseilles and Toulon via the Crimea. About 100 of the cashmere goats were then purchased by the French government (at 2,000 francs each)and sent to the royal sheep farm at Perpignan. The remainder, about 180 including new-borns,went to Ternaux’s property at St.Ouen outside Paris. Although Ternaux had little success getting small farmers to add cashmeres to their sheep herds,a few wealthy landowners were willing to experiment with the goats. For example, Ternaux’s herd was seen in 1823 by C.T.Tower of Weald Hall, Essex, England. Tower purchased two female and two male goats and took them back to England, where in 1828 he was awarded a gold medal by the Society for the Encouragement of Arts, Manufactures and Commerce for rearing a herd of cashmeres. Also,a few of Ternaux's goats were purchased for a model farm at Grignon, near Versailles, run by M. Polonceau. Polonceau crossbred the cashmeres with Angora goats to improve the down for spinning and weaving. This Cashmere-Angora herd was seen by William Riley of New South Wales in 1828, and again in 1831 when Riley purchased thirteen of the goats for trans-shipment to Australia. At the time, the average production of the Polonceau herd was 16 ounces (500 grams) of down. Ternaux's herd at St Ouen still numbered 150 when the famous industrialist died in 1833. The herd at Perpignan died out by 1829.[16][17]

By 1830, weaving cashmere shawls with French-produced yarn had become an important Scottish industry. The Scottish Board of Trustees for the Encouragement of Arts and Manufactures offered a 300 Pound Sterling reward to the first person who could spin cashmere in Scotland based on the French system. Captain Charles Stuart Cochrane collected the required information while in Paris and received a Scottish patent for the process in 1831. In the autumn of 1831, he sold the patent to Henry Houldsworth and sons of Glasgow. In 1832 Henry Houldsworth and sons commenced the manufacture of yarn, and in 1833 received the reward.[18]

Many early textile centers developed as part of the American Industrial Revolution. Among them, the Blackstone Valley became a major contributor to the American Industrial Revolution. The town of Uxbridge, Massachusetts became an early textile center in the Blackstone Valley, which was known for the manufacture of cashmere wool and satinets.

Austrian Textile Manufacturer Bernhard Altmann is credited with bringing cashmere to the United States of America on a mass scale beginning in 1947.[19]