From Infogalactic: the planetary knowledge core
Jump to: navigation, search
This article is about the tradition. For the musical ensemble, see Chaos Magic (band). 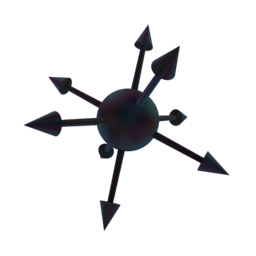 The chaosphere is a popular symbol of chaos magic. Many variants exist. For more, see Symbol of Chaos.

Chaos magic, also spelled chaos magick, is a postmodern magical tradition which emphasizes the pragmatic use of belief systems and the creation of new and unorthodox methods.[1] 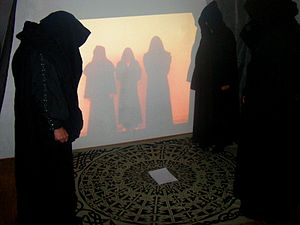 Although there are a few techniques unique to chaos magic (such as some forms of sigil magic), chaos magic is often highly individualistic and borrows liberally from other belief systems, due to chaos magic having a central belief that belief is a tool. Some common sources of inspiration include such diverse areas as science fiction, scientific theories, traditional ceremonial magic, neoshamanism, eastern philosophy, world religions, and individual experimentation. Despite tremendous individual variation, chaos magicians (sometimes called "chaotes"[2]) often work with chaotic and humorous paradigms, such as the worship of Hundun from Taoism or Eris from Discordianism and it is common for chaotes to believe in whatever god suits their current paradigm and discard it when necessary. Chaotes can be agnostic or atheist. Some chaos magicians also use psychedelic drugs in practices such as chemognosticism.[3]

According to chaos practitioners a computer is the central tool for connecting the followers, building virtual knowledge libraries and it also could be used for the simulation of the online ritual environment.[4]

Chaos magic was first formulated in West Yorkshire, England in the 1970s.[5] A meeting between Peter J. Carroll and Ray Sherwin in Deptford in 1976 has been claimed as the point of emergence of chaos magic,[6] and in 1978 Carroll and Sherwin founded the Illuminates of Thanateros (IOT),[5] a chaos magic organization. Liber Null (1978) by Peter J. Carroll further developed this new, experimental perspective on magic. This book and Carroll's Psychonaut (1981) remain important sources.

Aleister Crowley has marginal yet early and ongoing influence for his deconstructionalism of magic which Spare followed through with concerning spellcraft, explicitly sigilization, yet also for his emphasis on finding a common language for practitioners of different traditions which subsequent generations have elaborated on via chaos magic.

Visionary artist and mystic Austin Osman Spare, who was briefly a member of Aleister Crowley's A∴A∴ but later broke with them to work independently,[7] is largely the source of chaos magical theory and practice. Specifically, Spare developed the use of sigils and the use of gnosis to empower these. Most basic sigil work recapitulates Spare's technique, including the construction of a phrase detailing the magical intent, the elimination of duplicate letters, and the artistic recombination of the remaining letters to form the sigil. Although Spare died before chaos magick emerged, many consider him to be the father of chaos magic because of his repudiation of traditional magical systems in favor of a technique based on gnosis.

Following Spare's death, magicians continued to experiment outside of traditional magical orders. In addition to Spare's work, this experimentation was the result of many factors, including the counterculture of the 1960s and early 1970s, the wide publication of information on magic by magicians such as Aleister Crowley and Israel Regardie, the influence of Discordianism and Robert Anton Wilson, and the popularizing of magic by Wicca and Satanism.

The first edition of Liber Null does not include the term "chaos magic", but only refers to magic or "the magical art" in general.[8] Texts from this period consistently claim to state principles universal to magic, as opposed to a new specific style or tradition of magic, and describe their innovations as efforts to rid magic of superstitious and religious ideas. Psychonaut uses the label "individual sorcery as taught by the IOT".[8]

Chaos came to be part of this movement defined as "the 'thing' responsible for the origin and continued action of events[...]. It could as well be called 'God' or 'Tao', but the name 'Chaos' is virtually meaningless and free from the anthropomorphic ideas of religion."[8] The Symbol of Chaos used to signify it was apparently, but not explicitly, lifted from the fantasy novels of Michael Moorcock. Carroll wrote that the chaotic aspect of this magic aims for "psychological anarchy[...] The aim is to produce inspiration and enlightenment through disordering our belief structures."[8]

Belief as a tool

Chaos magic theory says that belief is an active magical force. It emphasizes flexibility of belief and the ability to consciously choose one's beliefs, hoping to apply belief as a tool rather than seeing it as a relatively unchanging part of one's personality.[9] Various psychological techniques are employed in order to induce flexibility of belief.[10] Other chaos magicians suggest that people do not need belief to work magic.[11] Austin Osman Spare asserts in The Book of Pleasure and various other works that will formulates desire which promulgates belief.

Aleister Crowley popularized the concept and usage of the joint terms Self/self and embodied it with his 'three-fold reference to self/Self" (respectively) in ascending gradiation as "that imp Aleister," "Frater Perdurabo" and "To Mega Therion." Also in his repertoire were "The Beast" and "The Prince" used mostly to refer to his more public personages either in the media or with other esoteric societies, mostly referring to how they interacted with and perceived him yet also his activities with them, since usage may come off as being secular and others may prefer to go beyond mere references to their own gradiated attainments or 'affiliations in context' and simply use such for self exploration and expression, which is the Kaotic innovation[citation needed].

A concept introduced by Peter Carroll is the gnostic state, also referred to as gnosis. This is defined as an altered state of consciousness that in his magic theory is necessary for working most forms of magic.[8] This is a departure from older concepts which described energies, spirits or symbolic acts as the source of magical powers. The concept has an ancestor in the Buddhist concept of Samadhi, made popular in western occultism by Aleister Crowley and further explored by Austin Osman Spare.

The gnostic state is achieved when a person's mind is focused on only one point, thought, or goal and all other thoughts are thrust out. Practitioners of chaos magic each develop their own ways of reaching this state. All such methods hinge on the belief that a simple thought or direction experienced during the gnostic state and then forgotten quickly afterwards bypasses the "psychic censor" (faculties averse to the magical manipulation of reality) and is sent to the subconscious, rather than the conscious mind, where it can be enacted through means unknown to the conscious mind. Three main types of gnosis are described:[3]

According to this belief, specific rituals, meditations and other elements of more traditional forms of magic are not to be understood as valuable by themselves, but only as gnosis-inducing techniques.

Perhaps the most striking feature of chaos magic is the concept of the magical paradigm shift. Borrowing the term 'paradigm shift' from philosopher Thomas Samuel Kuhn, Carroll made the technique of arbitrarily changing one's beliefs and magical paradigm a major concept of chaos magic.[8] An example of a magical paradigm shift is doing a Lovecraftian rite, followed by using a technique from an Edred Thorsson book in the following ritual. These two magical paradigms are very different, but while the individual is using one, he or she believes in it fully to the extent of ignoring all other (often contradictory) ones. Such ideas are influenced by Tantric practices of breaking down all social conditioning to realize the nature of reality.[citation needed]

Shifting magical paradigms has since found its way into the magical work of practitioners of many other magical traditions, but chaos magic remains the field where it is most developed.[citation needed]

Some chaos magicians like to operate in what is sometimes called a "meta-paradigm". This is much like syncretism but with the consideration that flexibility of belief is a means of personal power and freedom, more or less creating "syncretic reality tunneling".[citation needed]

Modification and innovation of ritual take place in all magical and religious traditions at varying paces. In the case of chaos magic, the idea that belief systems and gnosis-inducing techniques are interchangeable has led to a particularly wide variety of magical practices evidenced in large and diverse directories of rituals.[8][13] Many authors explicitly encourage readers to invent their own magical style.[14][15][16] The basic chaos magic training manual Liber MMM, mandatory for membership in the IOT, requires the original creation of a banishing ritual.[8]