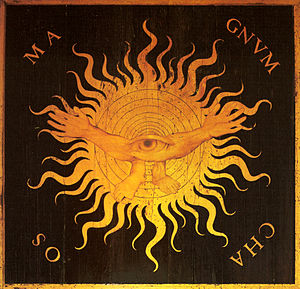 Chaos (Greek χάος, khaos) refers to the formless or void state preceding the creation of the universe or cosmos in the Greek creation myths, or to the initial "gap" created by the original separation of heaven and earth.[1]

Pherecydes of Syros (fl. 6th century BC) interpretes chaos as water, like something formless which can be differentiated.[5]

Hesiod and the Pre-Socratics use the Greek term in the context of cosmogony. Hesiod's "chaos" has been interpreted as a moving, formless mass from which the cosmos and the gods originated.[6] In Hesiod's opinion the origin should be indefinite and indeterminate, and it represents disorder and darkness.[7][8] Chaos has been linked with the term tohu wa-bohu of Genesis 1:2 . The term may refer to a state of non-being prior to creation[9][10] or to a formless state. In the Book of Genesis, the spirit of God is moving upon the face of the waters, and the earliest state of the universe is like a "watery chaos".[11][12] The Septuagint makes no use of χάος in the context of creation, instead using the term for גיא, "chasm, cleft", in Micha 1:6 and Zacharia 14:4.

Of the certain uses of the word chaos in Theogony, in the creation the word is referring to a "gaping void" which gives birth to the sky, but later the word is referring to the gap between the earth and the sky, after their separation. A parallel can be found in the Genesis. In the beginning God creates the earth and the sky. The earth is "formless and void" (tohu wa-bohu), and later God divides the waters under the firmament from the waters over the firmament, and calls the firmament "heaven".[1]

Nevertheless, the term chaos has been adopted in religious studies as referring to the primordial state before creation, strictly combining two separate notions of primordial waters or a primordial darkness from which a new order emerges and a primordial state as a merging of opposites, such as heaven and earth, which must be separated by a creator deity in an act of cosmogony.[13] In both cases, chaos referring to a notion of a primordial state contains the cosmos in potentia but needs to be formed by a demiurge before the world can begin its existence.

This model of a primordial state of matter has been opposed by the Church Fathers from the 2nd century, who posited a creation ex nihilo by an omnipotent God.[14]

In modern biblical studies, the term chaos is commonly used in the context of the Torah and their cognate narratives in Ancient Near Eastern mythology more generally. Parallels between the Hebrew Genesis and the Babylonian Enuma Elish were established by Hermann Gunkel in 1910.[15] Besides Genesis, other books of the Old Testament, especially a number of Psalms, some passages in Isaiah and Jeremiah and the Book of Job are relevant.[16][17][18]

Use of chaos in the derived sense of "complete disorder or confusion" first appears in Elizabethan Early Modern English, originally implying satirical exaggeration.[19] 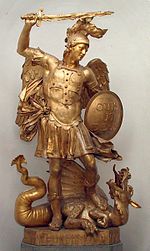 The motif of Chaoskampf (German for "struggle against chaos") is ubiquitous in myth and legend, depicting a battle of a culture hero deity with a chaos monster, often in the shape of a serpent or dragon. The same term has also been extended to parallel concepts in the religions of the Ancient Near East, such as the abstract conflict of ideas in the Egyptian duality of Maat and Isfet.[citation needed]

The origins of the Chaoskampf myth most likely lie in the Proto-Indo-European religion whose descendants almost all feature some variation of the story of a storm god fighting a sea serpent representing the clash between the forces of order and chaos. Early work by German academics such as Gunkel and Bousset in comparative mythology popularized translating the mythological sea serpent as a "dragon." Indo-European examples of this mythic trope include Thor vs. Jörmungandr (Norse), Tarhunt vs. Illuyanka (Hittite), Indra vs. Vritra (Vedic), Θraētaona vs. Aži Dahāka (Avestan), and Zeus vs. Typhon (Greek) among others.[20]

In the Theogony of Hesiod, Chaos is a divine primordial condition, which is the origin of the gods, and all things. It seems that in Hesiod's opinion, the origin should be indefinite and indeterminate, and it may represent infinite space, or formless matter.[4] The notion of the temporal infinity was familiar to the Greek mind from remote antiquity in the religious conception of immortality.[11] This idea of "the divine" as an origin, influenced the first Greek philosophers.[21] The main object of the first efforts to explain the world remained the description of its growth, from a beginning. They believed that the world arose out from a primal unity, and that this substance was the permanent base of all its being. It seems that Anaximander was influenced by the traditional popular conceptions and Hesiod’s thought, when he claims that the origin is apeiron (the unlimited), a divine and perpetual substance less definite than the common elements. Everything is generated from apeiron, and must return there according to necessity.[22] A popular conception of the nature of the world, was that the earth below its surface stretches down indefinitely and has its roots on or above Tartarus, the lower part of the underworld.[23] In a phrase of Xenophanes, "The upper limit of the earth borders on air, near our feet. The lower limit reaches down to the "apeiron" (i.e. the unlimited).[23] The sources and limits of the earth, the sea, the sky, Tartarus, and all things are located in a great windy-gap, which seems to be infinite, and is a later specification of "chaos".[23][24] Primal Chaos was sometimes said to be the true foundation of reality, particularly by philosophers such as Heraclitus.

For Hesiod and the early Greek Olympian myth (8th century BC), Chaos was the first of the primordial deities, followed by Gaia (Earth), Tartarus and Eros (Love).[25] From Chaos came Erebus and Nyx.[26]

Passages in Hesiod's Theogony suggest that Chaos was located below Earth but above Tartarus.[27] Primal Chaos was sometimes said to be the true foundation of reality, particularly by philosophers such as Heraclitus.

Ovid (1st century BC), in his Metamorphoses, described Chaos as "a rude and undeveloped mass, that nothing made except a ponderous weight; and all discordant elements confused, were there congested in a shapeless heap."[28]

Fifth-century Orphic cosmogony had a "Womb of Darkness" in which the Wind lay a Cosmic Egg whence Eros was hatched, who set the universe in motion.

The Greco-Roman tradition of Prima Materia, notably including 5th and 6th centuries Orphic cosmogony was merged with biblical notions (Tehom) in Christian belief and inherited by alchemy and Renaissance magic.

The cosmic egg of Orphism was taken as the raw material for the alchemical magnum opus in early Greek alchemy. The first stage of the process of producing the Lapis Philosophorum, i.e., nigredo, was identified with chaos. Because of association with the creation in Genesis, where "the Spirit of God moved upon the face of the waters" (Gen. 1:2), Chaos was further identified with the element Water.

Alchemy in the Middle Ages and Renaissance

Blessed Raimundus Lullus (1232–1315) wrote a Liber Chaos, in which he identifies Chaos as the primal form or matter created by God.

Swiss alchemist Paracelsus (1493–1541) uses chaos synonymously with element (because the primeval chaos is imagined as a formless congestion of all elements). Paracelsus thus identifies Earth as "the chaos of the gnomi", i.e., the element of the gnomes, through which these spirits move unobstructed as fish do through water, or birds through air.[29]

An alchemical treatise by Heinrich Khunrath, printed in Frankfurt in 1708, was entitled Chaos.[30] The 1708 introduction to the treatise states that the treatise was written in 1597 in Magdeburg, in the author's 23rd year of practicing alchemy.[31] The treatise purports to quote Paracelsus on the point that "The light of the soul, by the will of the Triune God, made all earthly things appear from the primal Chaos."[32]

Martin Ruland, in his 1612 Lexicon Alchemiae, states, "A crude mixture of matter or another name for Materia Prima is Chaos, as it is in the Beginning."

The term gas in chemistry was coined by Dutch chemist J. B. Van Helmont in the 17th century, directly based on the Paracelsian notion of chaos. The g in gas is due to the Dutch pronunciation of this letter as a spirant, also employed to pronounce Greek χ.[33]