Chief Justice of the United States 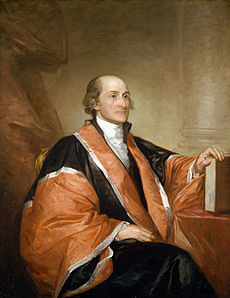 The other eight members of the court are officially Associate Justices of the Supreme Court of the United States, not "Associate Justices of the United States." The Chief Justice is the only member of the court to whom the Constitution refers as a "Justice," and only in Article I. Article III of the Constitution refers to all members of the Supreme Court (and of other federal courts) simply as "Judges."

The Chief Justice is nominated by the President of the United States and confirmed to sit on the Court by the United States Senate. The U.S. Constitution states that all justices of the court "shall hold their offices during good behavior," meaning that the appointments end only when a justice dies in office, resigns, or is impeached by the United States House of Representatives and convicted at trial by the Senate. The salary of the Chief Justice is set by Congress; the Constitution prohibits Congress from lowering the salary of any judge, including the Chief Justice, while that judge holds his or her office. As of 2015[update], the salary is $258,100 per year, which is slightly higher than that of the Associate Justices, which is $246,800.[2]

Three serving Associate Justices have received promotions to Chief Justice: Edward Douglass White in 1910, Harlan Fiske Stone in 1941, and William Rehnquist in 1986. Associate Justice Abe Fortas was nominated to the position of Chief Justice of the United States, but his nomination was filibustered by Senate Republicans in 1968. Despite the failed nomination, Fortas remained an Associate Justice until his resignation the following year. Most Chief Justices, including John Roberts, have been nominated to the highest position on the Court without any previous experience on the Supreme Court; indeed some, such as Earl Warren, received confirmation despite having no prior judicial experience.

There have been 21 individuals nominated for Chief Justice, of whom 17 have been confirmed by the Senate, although a different 17 have served. The second Chief Justice, John Rutledge, served in 1795 on a recess appointment, but did not receive Senate confirmation. Associate Justice William Cushing received nomination and confirmation as Chief Justice in January 1796, but declined the office; President Washington then nominated, and the Senate confirmed, Oliver Ellsworth, who served instead. The Senate subsequently confirmed President Adams's nomination of John Jay to replace Ellsworth, but Jay declined to resume his former office, citing the burden of riding circuit and its impact on his health, and his perception of the Court's lack of prestige. Adams then nominated John Marshall, whom the Senate confirmed shortly afterward.

Along with the duties of the associate justices, the Chief Justice has several unique duties.

Article I, section 3 of the U.S. Constitution stipulates that the Chief Justice shall preside over impeachment trials of the President of the United States in the U.S. Senate. Two Chief Justices, Salmon P. Chase and William Rehnquist, have presided over the trial in the Senate that follows an impeachment of the president – Chase in 1868 over the proceedings against President Andrew Johnson and Rehnquist in 1999 over the proceedings against President Bill Clinton. Both presidents were subsequently acquitted.

The Chief Justice is considered to be the justice with most seniority, independent of the number of years of service in the Supreme Court. As a result, the Chief Justice chairs the conferences where cases are discussed and voted on by the justices. The Chief Justice normally speaks first, and so has influence in framing the discussion. 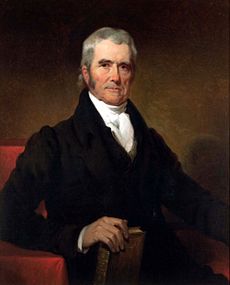 The Chief Justice sets the agenda for the weekly meetings where the justices review the petitions for certiorari, to decide whether to hear or deny each case. The Supreme Court agrees to hear less than one percent of the cases petitioned to it. While associate justices may append items to the weekly agenda, in practice this initial agenda-setting power of the Chief Justice has significant influence over the direction of the court.

Despite the seniority and added prestige, the Chief Justice's vote carries the same legal weight as each of the other eight justices. In any decision, he has no legal authority to overrule the verdicts or interpretations of the other eight judges or tamper with them. However, in any vote, the most senior justice in the majority decides who will write the Opinion of the Court. This power to determine the opinion author (including the option to select oneself) allows a Chief Justice in the majority to influence the historical record. Two justices in the same majority, given the opportunity, might write very different majority opinions (as evidenced by many concurring opinions); being assigned the opinion may also cement the vote of an associate who is viewed as only marginally in the majority (a tactic that was reportedly used to some effect by Earl Warren). A Chief Justice who knows the associate justices can therefore do much—by the simple act of selecting the justice who writes the opinion of the court—to affect the "flavor" of the opinion, which in turn can affect the interpretation of that opinion in cases before lower courts in the years to come. It is said that some Chief Justices, notably Earl Warren[citation needed] and Warren E. Burger, sometimes switched votes to a majority they disagreed with to be able to use this prerogative of the Chief Justice to dictate who would write the opinion.[5]

The Chief Justice typically administers the oath of office at the inauguration of the President of the United States. This is a traditional rather than constitutional responsibility of the Chief Justice; the Constitution does not require that the oath be administered by anyone in particular, simply that it be taken by the president. Law empowers any federal and state judge, as well as notaries public, to administer oaths and affirmations. 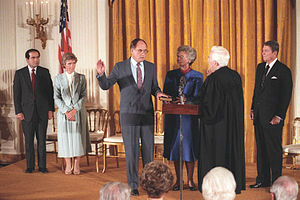 If the Chief Justice is ill or incapacitated, the oath is usually administered by the next senior member of the Supreme Court. Seven times, someone other than the Chief Justice of the United States administered the oath of office to the President.[6] Robert Livingston, as Chancellor of the State of New York (the state's highest ranking judicial office), administered the oath of office to George Washington at his first inauguration; there was no Chief Justice of the United States, nor any other federal judge prior to their appointments by President Washington in the months following his inauguration. William Cushing, an associate justice of the Supreme Court, administered Washington's second oath of office in 1793. Calvin Coolidge's father, a notary public, administered the oath to his son after the death of Warren Harding.[7] This, however, was contested upon Coolidge's return to Washington and his oath was re-administered by Judge Adolph A. Hoehling, Jr. of the U.S. District Court for the District of Columbia.[8] John Tyler and Millard Fillmore were both sworn in on the death of their predecessors by Chief Justice William Cranch of the Circuit Court of the District of Columbia.[9] Chester A. Arthur and Theodore Roosevelt's initial oaths reflected the unexpected nature of their taking office. On November 22, 1963, after the assassination of President John F. Kennedy, Judge Sarah T. Hughes, a federal district court judge of the United States District Court for the Northern District of Texas, administered the oath of office to then Vice President Lyndon B. Johnson aboard the presidential airplane.

Unlike Senators and Representatives who are constitutionally prohibited from holding any other "office of trust or profit" of the United States or of any state while holding their congressional seats, the Chief Justice and the other members of the federal judiciary are not barred from serving in other positions. Chief Justice John Jay served as a diplomat to negotiate the so-called Jay Treaty (also known as the Treaty of London of 1794), and Chief Justice Earl Warren chaired The President's Commission on the Assassination of President Kennedy. As described above, the Chief Justice holds office in the Smithsonian Institution and the Library of Congress.

Under 28 USC,[11] when the Chief Justice is unable to discharge his functions, or that office is vacant, his duties are carried out by the most senior associate justice who is able to act, until the disability or vacancy ends.