Governor-General of the Philippines

The Governor-General of the Philippines (Spanish: Gobernador-General de Filipinas; Filipino: Gobernador-Heneral ng Pilipinas) was the title of the government executive during the colonial period of the Philippines, governed mainly by Spain (1565–1898) and the United States (1898–1946), and briefly by Great Britain (1762–1764) and Japan (1942–1945). They were also the representative of the executive of the ruling power.

From 1565 to 1898, the Philippines was under Spanish rule. From 1565–1821, The governor and captain-general was appointed by the Viceroy of New Spain upon recommendation of the Spanish Cortes and governed on behalf of the Monarch of Spain. When there was a vacancy (e.g. death, or during the transitional period between governors), the Royal Audiencia in Manila appoints a temporary governor from among its members.

After 1821, the country was no longer under the Viceroyalty of New Spain (present-day Mexico) and administrative affairs formerly handled by New Spain were transferred to Madrid and placed directly under the Spanish Crown.

Great Britain occupied Manila and the naval port of Cavite as part of the Seven Years' War.

After the 1821 Mexican War of Independence, Mexico became independent and was no longer part of the Spanish Empire. The Viceroyalty of New Spain ceased to exist. The Philippines, as a result, was directly governed from Madrid, under the Crown.

On July 4, 1901, executive authority over the islands was transferred to the president of the Second Philippine Commission who had the title of Civil Governor, a position appointed by the President of the United States and approved by the United States Senate. For the first year, a Military Governor, Adna Chaffee, ruled parts of the country still resisting the American rule, concurrent with civil governor, William Howard Taft.[5] Disagreements between the two were not uncommon.[6] The following year, on July 4, 1902, Taft became the sole executive authority.[4] Chaffee remained as commander of Philippine Division until September 30, 1902.[7]

The title was changed to Governor General in 1905 by an act of Congress (Public 43 - February 6, 1905).[4] The term "insular" (from insulam, the Latin word for island)[8] refers to U.S. island territories that are not incorporated into either a state or a federal district. All insular areas was under the authority of the U.S. Bureau of Insular Affairs, a division of the US War Department.[9][10]

After the Philippine independence on July 4, 1946, the last High Commissioner, Paul McNutt, became the first United States Ambassador to the Philippines.

In December 1941, the Commonwealth of the Philippines was invaded by Japan as part of World War II. The next year, the Empire of Japan sent a military governor to control the country during wartime, followed by the formal establishment of the puppet second republic.[11] 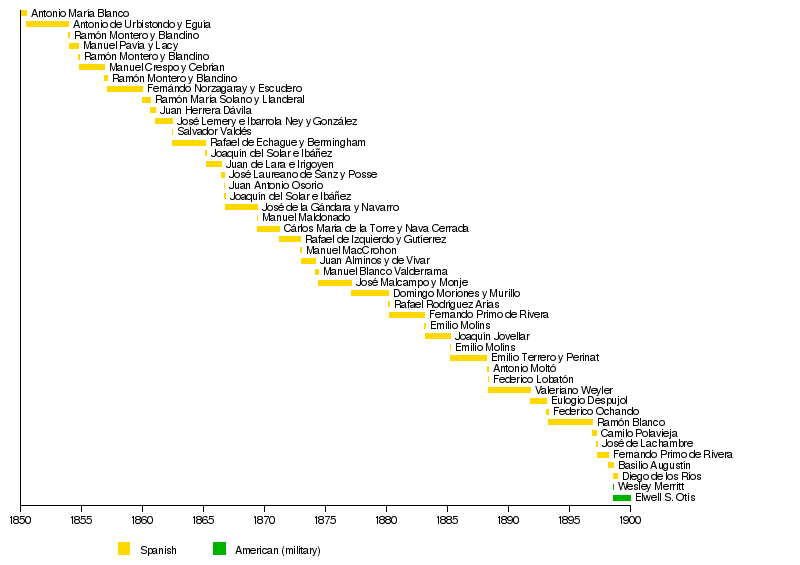