From Infogalactic: the planetary knowledge core
Jump to: navigation, search
This article is about the folk dance. For other uses, see Jig (disambiguation). 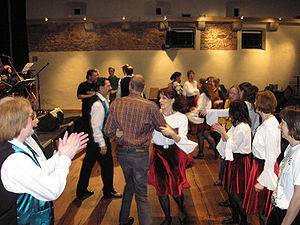 Dancing the Haymakers' Jig at an Irish ceilidh

The Jig (Irish: port) is a form of lively folk dance in compound meter, as well as the accompanying dance tune. It developed in 16th-century England, and was quickly adopted on the Continent where it eventually became the final movement of the mature Baroque dance suite (the French gigue; Italian and Spanish giga).[1] Today it is most associated with Irish dance music, Scottish country dance and the Métis people in Canada.[2] Jigs were originally in duple compound meter, (e.g., 12/8 time), but have been adapted to a variety of time signatures, by which they are often classified into groups, including light jigs, slip jigs, single jigs, double jigs, and treble jigs. 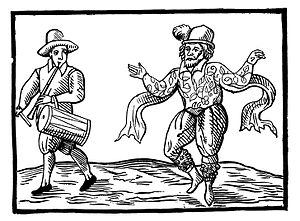 The term jig was probably derived from the French giguer, meaning 'to jump' or the Italian giga.[3] It was known as a dance in 16th-century England, often in 12/8 time,[4] and the term was used for a post-play entertainment featuring dance in early modern England, but which 'probably employed a great variety of dances, solo (suitable for jigs), paired, round, country or courtly':[5] in Playford's Dancing Master (1651) 'the dance game in ‘Kemps Jegg’ is a typical scenario from a dramatic jig and it is likely that the combination of dance metre for steps and non-metrical passages for pantomime indicates how a solo or ensemble jig might have been danced by stage players.'[6] Later the dance began to be associated with music particularly in 6/8 time, and with slip jigs 9/8 time.[7]

During the seventeenth century the dance was adopted in Ireland and Scotland, where it was widely adapted, and the jig is now most often associated with these countries.[8] The jig is second in popularity only to the reel in traditional Irish dance; it is popular but somewhat less common in Scottish country dance music. It is transcribed in compound meter, being 6/8 time. The most common structure of a jig is two eight-bar parts, performing two different steps, each once on the right foot, and one on the left foot. As with most other types of dance tunes in Irish music, at a session or a dance it is common for two or more jigs to be strung together in a set, flowing on without interruption. 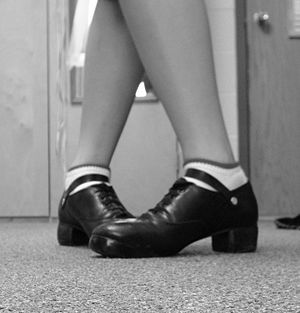 Slip jigs are in 9/8 time. Because of the longer measures, they are longer than the reel and the light jig, with the same number of bars to the music.[10] The dance is performed high on the toes, and is often considered the "ballet of Irish dance" because of its graceful movements that seem to slip the performers across the floor. Slip jigs are performed at a speed of 112 at feiseanna.

Single jigs should not be confused with slides; they are the least common of the jigs, performed in ghillies, in a 6/8 or less commonly a 12/8 time. Musically, the single jig tends to follow the pattern of a quarter note followed by an eighth note (twice per 6/8 bar), whereas the pattern for the double jig is three eighth notes twice per 6/8 bar.

Hop jigs are the fastest of all jigs next to light jigs, but the term hop jig causes some confusion, as some people use it for a single jig, while others use this term to refer to a tune in 9/8 time.

Among the latter, some do not distinguish it from a slip jig, while some reserve the term to a slip jig variant that has special characteristics, in particular an emphasis on 1/4–1/8 pairs.

In 19th-century America, the jig was the name adopted for a form of step dancing developed by enslaved African-Americans and later adopted by minstrel show performers. Danced to five-string banjo or fiddle tunes in 2/2 or 2/4 meter played at schottische tempo, the minstrel jig (also called the "straight jig" to distinguish it from Irish dances) was characterized by syncopated rhythm and eccentric movements. Jig dancers employed a repertoire of "hits" on the heel or toe, ""hops" on one foot, "springs" off both feet as well as various slides and shuffles.[11] The most famous early jig dancer was Master Juba, an African-American who inspired a host of white imitators, many of whom performed in blackface. John Diamond, an Irish-American who competed with Master Juba in a series of "challenge dances," was among the most prominent of these white minstrel jig dancers. Minstrel jigs, as well as clogs and breakdowns, were crucial to the evolution of 20th-century tap and soft-shoe dancing.

A variant of the straight jig was the "sand jig," performed as a series of shuffles and slides on a sand-strewn stage. The most prominent "sand jiggers" of the late 19th century were two women, both born in New York in 1855: Buffalo native Kitty O'Neil and her Manhattan-born rival Kitty Sharp.[12] The form survived into the 20th century mainly among African-American tap dancers, including John Bubbles, Sammy Davis, Jr., Harriet Brown, Howard "Sandman" Sims and Gregory Hines.