Dean Gooderham Acheson (pronounced /ˈætʃᵻsən/;[1] April 11, 1893 – October 12, 1971) was an American statesman and lawyer. As United States Secretary of State in the administration of President Harry S. Truman from 1949 to 1953, he played a central role in defining American foreign policy during the Cold War.[2] Acheson helped design the Marshall Plan and played a central role in the development of the Truman Doctrine and creation of the North Atlantic Treaty Organization.

Acheson's most famous decision was convincing President Truman to intervene in the Korean War in June 1950. He also persuaded Truman to dispatch aid and advisors to French forces in Indochina, though in 1968 he finally counseled President Lyndon B. Johnson to negotiate for peace with North Vietnam. During the Cuban Missile Crisis, President John F. Kennedy called upon Acheson for advice, bringing him into the executive committee (ExComm), a strategic advisory group.

In the late 1940s Acheson came under heavy attack over Truman's policy toward China, and for Acheson's defense of State Department employees (such as Alger Hiss) accused during the anti-gay Lavender and anti-Communist Red Scare investigations by Senator Joseph McCarthy and others.

Dean Gooderham Acheson was born in Middletown, Connecticut. His father, Edward Campion Acheson, was an English-born Church of England priest who, after several years in Canada, moved to the U.S. to become Episcopal Bishop of Connecticut. His mother, Eleanor Gertrude Gooderham, was a Canadian-born granddaughter of prominent Canadian distiller William Gooderham (1790–1881), a founder of the Gooderham and Worts Distillery. Like his father, he was a staunch Democrat and opponent of prohibition.

Acheson attended Groton School and Yale College (1912–1915), where he joined Scroll and Key Society, was elected to Phi Beta Kappa[3] and was a brother of the Delta Kappa Epsilon fraternity (Phi chapter). At Groton and Yale he had the reputation of a partier and prankster; he was somewhat aloof but still popular with his classmates. Acheson's well-known, reputed arrogance—he disdained the curriculum at Yale as focusing on memorizing subjects already known or not worth knowing more about—was apparent early. At Harvard Law School from 1915 to 1918, however, he was swept away by the intellect of professor Felix Frankfurter and finished fifth in his class.[4]

On May 15, 1917, while serving in the National Guard, Acheson married Alice Caroline Stanley (August 12, 1895 – January 20, 1996). She loved painting and politics and served as a stabilizing influence throughout their enduring marriage; they had three children: (David Campion Acheson, Jane Acheson Brown and Mary Eleanor Acheson Bundy).

On July 25, 1918, he was commissioned as an ensign in the Naval Reserve and served with the Naval Overseas Transportation Service until he was released from active duty on December 31 of the same year.

A lifelong Democrat, Acheson worked at a law firm in Washington D.C., Covington & Burling, often dealing with international legal issues before Franklin Delano Roosevelt appointed him Undersecretary of the United States Treasury in 1933. When Secretary William H. Woodin fell ill, Acheson suddenly found himself acting secretary despite his ignorance of finance. Because of his opposition to FDR's plan to deflate the dollar by controlling gold prices (thus creating inflation), he was forced to resign in November 1933 and resumed his law practice.[6] In 1939–1940 he headed a committee to study the operation of administrative bureaus in the federal government.

Brought back as assistant secretary of state in 1941, Acheson implemented much of United States economic policy aiding Great Britain and harming the Axis Powers.[7] Acheson implemented the Lend-Lease policy that helped re-arm Great Britain and the American/British/Dutch oil embargo that cut off 95 percent of Japanese oil supplies and escalated the crisis with Japan in 1941.[8] Roosevelt froze all Japanese assets merely to disconcert them. He did not intend the flow of oil to Japan to cease. The president then departed Washington for Newfoundland to meet with Churchill. While he was gone Acheson used those frozen assets to deny Japan oil. Upon the president's return, he decided it would appear weak and appeasing to reverse the De Facto oil embargo.[9]

In 1944, Acheson attended the Bretton Woods Conference as the head delegate from the State department. At this conference the post-war international economic structure was designed. The conference was the birthplace of the International Monetary Fund, the World Bank, and the General Agreement on Tariffs and Trade, the last of which would evolve into the World Trade Organization. 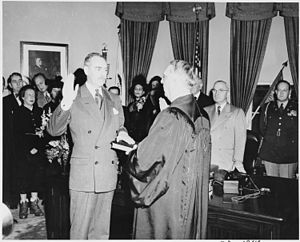 Later, in 1945, Harry S. Truman selected Acheson as his Undersecretary of United States Department of State; he retained this position working under Secretaries of State Edward Stettinius, Jr., James F. Byrnes, and George Marshall. And, as late as 1945 or 1946 Acheson sought détente with the Soviet Union. In 1946, as chairman of a special committee to prepare a plan for the international control of atomic energy, he wrote the Acheson–Lilienthal report. At first Acheson was conciliatory towards Joseph Stalin.

The Soviet Union's attempts at regional hegemony in Eastern Europe and in Southwest Asia, however, changed Acheson's thinking. From this point forward, one historian writes, "Acheson was more than 'present at the creation' of the Cold War; he was a primary architect."[10][11] Acheson often found himself acting Secretary during the Secretary's frequent overseas trips, and during this period he cemented a close relationship with President Truman. Acheson devised the policy and wrote Truman's 1947 request to Congress for aid to Greece and Turkey, a speech which stressed the dangers of totalitarianism rather than Soviet aggression and marked the fundamental change in American foreign policy that became known as the Truman Doctrine.[12] Acheson designed the economic aid program to Europe that became known as the Marshall Plan. Acheson believed the best way to contain Stalin's Communism and prevent future European conflict was to restore economic prosperity to Western Europe, to encourage interstate cooperation there, and to help the American economy by making its trading partners richer.

On June 30, 1947 Acheson received the Medal for Merit from President Truman.[13] 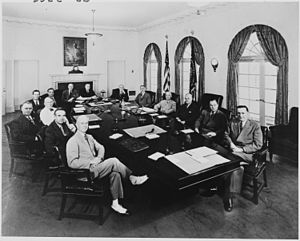 Dean Acheson (fifth from right) as the Secretary of State, with the meeting of Truman cabinet, (August 25, 1950)

In 1949, Acheson was appointed Secretary of State. In this position he built a working framework for containment, first formulated by George Kennan, who served as the head of Acheson's Policy Planning Staff. Acheson was the main designer of the military alliance NATO, and signed the pact for the United States. The formation of NATO was a dramatic departure from historic American foreign policy goals of avoiding any "entangling alliances."

During the summer of 1949, the state department, headed by Acheson, produced a study of recent Sino-American relations. The document known officially as United States Relations with China with Special Reference to the Period 1944–1949, which later was simply called the China White Paper, attempted to dismiss any misinterpretations of Chinese and American diplomacy toward each other.[14] Published during the height of Mao Zedong's takeover, the 1,054 page document argued that American intervention in China was doomed to failure. Although Acheson and Truman had hoped that the study would dispel rumors and conjecture,[15] the paper helped to convince many critics that the administration had indeed failed to check the spread of communism in China.[16]

Acheson's speech on January 12, 1950, before the National Press Club [17] did not mention the Korea Peninsula as part of the all-important "defense perimeter" of the United States, an omission that critics subsequently took to mean that the United States would not defend the ROK from communist attack. Critics[who?] of Acheson have argued that the speech seemed to say that South Korea was beyond the American defense line, so that American support for the new Syngman Rhee government in South Korea would be limited. Critics later charged that the speech provided Joseph Stalin and Kim Il-sung with reason to believe the US would not intervene if they invaded the South. [18]

The "loss of China" attacks

With the Communist takeover of mainland China in 1949, that country switched from a close friend of the U.S. to a bitter enemy—the two powers were at war in Korea by 1950. Critics blamed Acheson for what they called the "loss of China" and launched several years of organized opposition to Acheson's tenure; Acheson ridiculed his opponents and called this period in his outspoken memoirs "The Attack of the Primitives". Although he maintained his role as a firm anti-communist, he was attacked by various anti-communists for not taking a more active role in attacking communism abroad and domestically, rather than hew to his policy of containment of communist expansion. Both he and Secretary of Defense George Marshall came under attack from men such as Joseph McCarthy; Acheson became a byword to some Americans, who tried to equate containment with appeasement. Congressman Richard Nixon, who later as president would call on Acheson for advice, ridiculed "Acheson's College of Cowardly Communist Containment". This criticism grew very loud after Acheson refused to "turn his back on Alger Hiss" when the latter was accused of being a Communist spy, and convicted of perjury for denying he was a spy.[19] 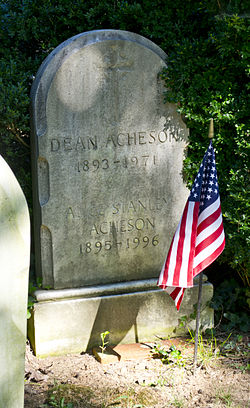 The Gravesite of Dean Acheson in Oak Hill Cemetery.

He retired on January 20, 1953, the last day of the Truman administration, and served on the Yale Board of Trustees along with Senator Robert A. Taft, one of his sharpest critics. He was elected a Fellow of the American Academy of Arts and Sciences in 1955.[20]

Acheson returned to his private law practice. Although his official governmental career was over, his influence was not. He was ignored by the Eisenhower administration but headed up Democratic Policy Groups in the late 1950s. Much of President John F. Kennedy's flexible response policies came from the position papers drawn up by this group.

Acheson's law offices were strategically located a few blocks from the White House and he accomplished much out of office. He became an unofficial advisor to the Kennedy and Johnson administrations. During the Cuban Missile Crisis, for example, he was dispatched by Kennedy to France to brief French President Charles de Gaulle and gain his support for the United States blockade. Acheson so strongly opposed the final decision merely to blockade that he resigned from the Executive Committee. During the 1960s, he was a leading member of a bipartisan group of establishment elders known as The Wise Men, who initially supported the Vietnam War, but then turned against it at a critical meeting with President Lyndon Johnson in March 1968. He reconciled with his old foe Richard Nixon and quietly became a major advisor to Nixon when he was president.

In 1964, he received the Presidential Medal of Freedom, with Distinction. In 1970, he won the Pulitzer Prize for History for his memoirs of his tenure in the State Department, Present at the Creation: My Years in the State Department. The Modern Library placed the book at #47 on its top 100 non-fiction books of the 20th century.[21]

At 6:00 p.m. on October 12, 1971, Acheson died of a massive stroke, at his farm home in Sandy Spring, Maryland, at the age of 78. Acheson was interred in Oak Hill Cemetery in Georgetown, Washington, DC.

He was survived by a son, David C. Acheson, and a daughter, Mary Acheson Bundy, wife of William P. Bundy.