Dictatorship is a form of government where a country is ruled by one person or political entity, and exercised through various mechanisms to ensure the entity's power remains strong.[1][2]

A dictatorship is a type of authoritarianism, in which politicians regulate nearly every aspect of the public and private behavior of normal people. Dictatorships and totalitarianism generally employ political propaganda to decrease the influence of proponents of alternative governing systems, as is the nature of nationalism of any governing system. 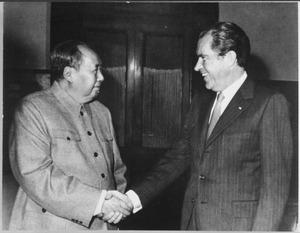 Chinese Communist Party Chairman Mao Zedong meets with U.S. President Richard Nixon. Mao's dictatorial rule from 1949 to 1976 is believed to have caused the deaths of an estimated 40 to more than 70 million people.[3]

In the 19th and 20th centuries, traditional monarchies gradually declined and disappeared. Dictatorship and constitutional democracy emerged as the world's two major forms of government.[1]

In the Roman Empire, a Roman dictator was the incumbent of a political office of legislate of the Roman Republic. Roman dictators were allocated absolute power during times of emergency. Their power was originally neither arbitrary nor unaccountable, being subject to law and requiring retrospective justification. There were no such dictatorships after the beginning of the 2nd century BCE, and later dictators such as Sulla and the Roman Emperors exercised power much more personally and arbitrarily.

After the collapse of Spanish colonial rule, various dictators emerged in many liberated countries. Often leading a private army, these Caudillo or self-appointed political-military leaders, attacked weak national governments once they control a regional political and economic powers, with examples such as Antonio López de Santa Anna in Mexico and Juan Manuel de Rosas in Argentina. Such dictators have been also referred to as "personalismo"[1].

Stalinism and fascism in the 20th century dictatorships 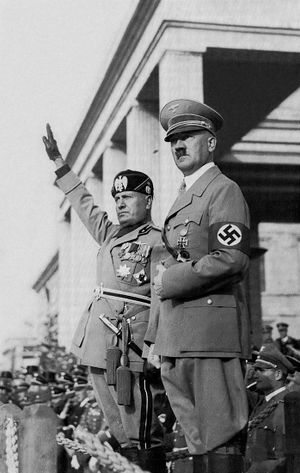 Adolf Hitler (right) and Benito Mussolini (left). Hitler's policies and orders resulted in the death of about 11 million noncombatants .[5]

In the first half of the 20th century, Stalinist and fascist dictatorship regimes appeared in a variety of scientifically and technologically advanced countries, which are distinct from the dictatorship in Latin America and the post-colonial dictatorships in Africa and Asia. Leading examples of modern totalitarian dictatorship include: [1].

Dictatorships of Africa and Asia after World War II

After World War II, dictators established themselves in the several new states of Africa and Asia, often at the expense or failure of the constitutions inherited from the colonial powers. These constitutions often failed to work without a strong middle class or work against the preexisting autocratic rule. Some elected presidents and prime ministers captured power by suppressing the opposition and installing one-party rule, and some established military dictatorships through army.[1]

The often-cited exploitative dictator is the regime of Mobutu Sese Seko, who ruled Zaire from 1965 to 1997, embezzling over $5 billion from his country.[7] Another classic case is the Philippines under the rule of Ferdinand Marcos.[8] He is reputed to have stolen some US$5–10 billion.[9] More than $400 billion were stolen from the treasury by Nigeria's leaders between 1960 and 1999.[10]

The global dynamics of democratization has been a central question for political scientists.[11][12] The Third Wave Democracy was said to turn some dictatorships into democracies.[11] (see also the contrast between the two figures of the DD index in 1988 and 2008).

Democracy Index by the Economist Intelligence Unit, 2011.[13] Countries that are more red are authoritarian, and most often dictatorships. Most current dictatorships are in Africa and Asia.

The conceptual and methodological differences in the political science literature exist with regards to measuring and classifying regimes into dictatorships and/or democracies, with prominent examples such as Freedom House, Polity IV and DD index, and their validity and reliability being discussed.[14]

Roughly two research approaches exist: (1) the minimalist approach focuses on whether a country has continued elections that are competitive, and (2) the substantive approach expands the concept of democracy to include human rights, freedom of the press, the rule of law, etc.[15][16][17] The DD index is seen as an example of the minimalist approach, whereas the Polity data series, relatively more substantive.[18]

The most general term is despotism, a form of government in which a single entity rules with absolute power. That entity may be an individual, as in an autocracy, or it may be a group,[19] as in an oligarchy. Despotism can mean tyranny (dominance through threat of punishment and violence), or absolutism; or dictatorship (a form of government in which the ruler is an absolute dictator, not restricted by a constitution, laws or opposition, etc.).[20] Dictatorship may take the form of authoritarianism or totalitarianism.

Dictatorship is 'a form of government in which absolute power is concentrated in a dictator or a small clique' or 'a government organisation or group in which absolute power is so concentrated',[21] whereas democracy, with which the concept of dictatorship is often compared, is defined by most people as a form of government where those who govern are selected through contested elections. Authoritarian dictatorships are those where there is little political mobilization and "a small group exercises power within formally ill-defined limits but actually quite predictable ones".[22] Totalitarian dictatorships involve a "single party led by a single powerful individual with a powerful secret police and a highly developed ideology." Here, the government has "total control of mass communications and social and economic organizations".[23] Hannah Arendt labelled totalitarianism a new and extreme form of dictatorship involving "atomized, isolated individuals" in which ideology plays a leading role in defining how the entire society should be organised.[24] Juan Linz argues that the distinction between an authoritarian regime and a totalitarian one is that while an authoritarian one seeks to suffocate politics and political mobilization (depoliticization), a totalitarian one seeks to control politics and political mobilization.[25] 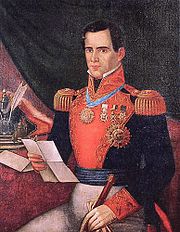 Dictatorships may be classified in a number of ways, such as: 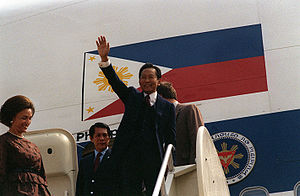 Ferdinand Marcos, the dictator of the Philippines

A stable dictatorship is a dictatorship that is able to remain in power for long periods. The stable dictatorship theory concerning the Soviet Union held that after the succession crisis following Joseph Stalin's death, the victorious leader assumed the status of a Stalinist dictator without Stalin's terror apparatus.[30] Chile and Paraguay were considered to be stable dictatorships in the 1970s.[31] It has been argued that stable dictatorships behave differently than unstable dictatorships. For instance, Maria Brouwer opines that "expansionary policies can fail and undermine the authority of the leader. Stable dictators, would therefore, be inclined to refrain from military aggression. This applies to imperial China, Byzantium and Japan, which refrained from expanding their empire at some point in time. Emerging dictators, by contrast, want to win the people’s support by promising them riches from appropriating domestic or foreign wealth. They have not much to lose from failure, whereas success could elevate them to positions of wealth and power."[32]