One-party states justify themselves through various methods. Most often, proponents of a one-party state argue that the existence of separate parties runs counter to national unity. Others argue that the one party is the vanguard of the people, and therefore its right to rule cannot be legitimately questioned. The Marxist theory states that political parties represent the interests, most of which, in a liberal system, respond to the economic power and are part of the system (the superstructure) where whoever wins there will be no substantial changes, once abolished class distinctions no place for the struggle for multiparty own economic interests, however, an organization that is able to formulate national policies and manage their reins to ensure the development of socialism is necessary, this organization is the only party to be the only existing single social class and the common interest of progress.[clarification needed]

Some one-party states only outlaw opposition parties, while allowing subordinate allied parties to exist as part of a permanent coalition such as a popular front.[citation needed] Examples of this are the People's Republic of China under the United Front, or the National Front in former East Germany. Others may allow non-party members to run for legislative seats, as was the case with Taiwan's Tangwai movement in the 1970s and 1980s, as well as the Soviet Union.

Most one-party states have been ruled either by parties following the ideology of Marxism-Leninism and international solidarity (such as the Soviet Union for most of its existence), or by parties following some type of nationalist or fascist ideology (such as Italy under Benito Mussolini), or by parties that came to power in the wake of independence from colonial rule. One-party systems often arise from decolonization because one party has had an overwhelmingly dominant role in liberation or in independence struggles.

The term "communist state" is often used in the west to apply to states in which the ruling party subscribes to a form of Marxism-Leninism. However, such states do not use that term themselves, seeing communism as a phase to develop after the full maturation of socialism, and instead often use the titles of "people's republic", "socialist republic", or "democratic republic". One peculiar example is Cuba, where the role of the Communist Party is enshrined in the constitution, and no party is permitted to campaign or run candidates for election, including the Communist party. Candidates are elected on an individual referendum basis without formal party involvement, though elected assemblies predominantly consist of members of the dominant party alongside non-affiliated candidates.[1] 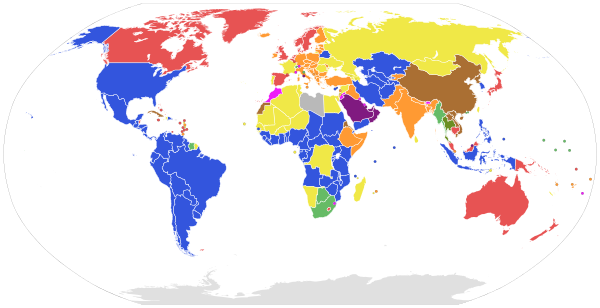 The True Whig Party of Liberia is considered the founder of the first one-party state in the world, as despite opposition parties never being outlawed, it completely dominated Liberian politics from 1878 until 1980.[2] The party was conceived by the original Black American settlers and their descendants who referred to themselves as Americo-Liberians. Initially, its ideology was heavily influenced by that of the Whig Party in the United States. Over time it developed into a powerful Masonic Order that ruled every aspect of Liberian society for well over a century until it was overthrown in 1980. While the True Whig Party still exists today, its influence has substantially declined.

As of 2013[update] the following countries are legally constituted as one-party states and the name of the one party in power: