From Infogalactic: the planetary knowledge core
Jump to: navigation, search
This article deals with the Imperial state of Limburg, for the re-established state of the German Confederation see Duchy of Limburg (1839–1867).

The Duchy of Limburg or Limbourg[1] was a state of the Holy Roman Empire. Its main territory including the capital Limbourg is today located within the Belgian province of Liège, with a small part in the neighbouring province of Belgian Limburg, within the east of Voeren.

From about 1020, Limburg Castle served as the residence of the Counts of Limburg, who in 1100 adopted the ducal title (Herzog in German, Hertog in Dutch) as Dukes of Lower Lorraine, one of the most important and ancient titles in this part of the empire. The extinction of the line in 1283 sparked the War of the Limburg Succession, whereafter Limburg was ruled by the Dukes of Brabant in personal union, eventually being grouped together with the Brabantian "Overmaas" territories bordering it (including Dalhem, Valkenburg, and Hertogenrade), to be one of the Seventeen Provinces of the Burgundian Netherlands. Unlike other parts of this province, the lands of the duchy stayed intact within the Southern Netherlands, under Habsburg control, after the divisions caused by the Eighty Years' War and the War of the Spanish Succession. However finally, after the failed Brabant Revolution in 1789, the duchy's history was terminated with the occupation by French Revolutionary troops in 1793. These lands were reunited within modern Belgium only after World War I.

The duchy was multilingual, being the place where Dutch, French, and German dialects border upon each other and coexist at their geographical extremes, both now and in medieval times. Its northern and eastern borders are the approximate boundaries of the modern state of Belgium with the Netherlands and Germany, at their "tripoint". The eastern part, which includes Eupen, is the administrative capital and northernmost part of the modern Belgian German-speaking Ostkantonen.

Of the various places known as Limburg, it is the Duchy of Limburg which is the origin of the pungent-smelling soft cheese known as Limburger, and today made in many places. (In modern Belgium, such cheese is known as Herve cheese, after the town of that name within the duchy.)

The state's territory was situated in the Low Countries between the river Meuse (Maas) in the west and the Imperial city of Aachen in the east. Its most important cities were Limbourg, the capital, and Eupen. The Limburg estates were commonly divided into five legal districts (Hochbänke):

In the west and south, Limburg bordered on the territory of the Liège Prince-Bishops, in the north and east on the Rhenish Duchy of Jülich. Linguistically Limburg was situated on the border of Germanic with Romance Europe. While in the northern and eastern districts Limburgish and Ripuarian dialects were spoken, the southwestern part around Herve was dominated by Walloon. 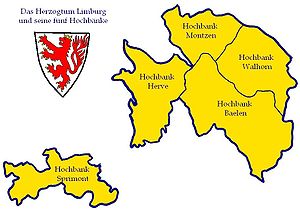 Basic administrative parts until the French revolution, including detached Sprimont.

When Julius Caesar first entered this area and took it under Roman control it was inhabited by a group of Belgic Gaulish tribes, the Condrusi, Eburones, Caeraesi, Segni and Paemani, who were referred to collectively as the Germani cisrhenani. They were in contact with both Gaulish and Germanic peoples. The language they spoke is not certain, and it is also not certain to what extent these earlier tribes can be equated to the Tungri, found in this same area only a few generations later. By this time the area had become integrated into the Civitas Tungrorum, with its capital at Tongeren. As part of the Roman empire, the civitas of the Tungri began as part of the province of Gallia Belgica, but was soon split out to become part of Germania Inferior, which had its capital at Cologne, and was later reorganized as Germania Secunda. This was a frontier area, which took in soldiers and settlers from across the Rhine in Germany and from around the empire.

By late Roman times, a new immigration of Germanic people from the north and east, the Franks, came to dominate the whole of Germania Secunda, but the region of the Duchy of Limburg, being south of the military Bavay-Tongeren-Heerlen-Cologne route remained relatively Romanized at first, as reflected still in the modern linguistic situation. The region to the north of the Duchy was dominated by Salian Franks, and the area to the east came under the Ripuarian Franks. Under the Merovingian and Carolingian dynasties, Frankish rule expanded from the region around Limbourg to cover larger areas, and eventually began to replace Roman imperial rule. By the time of Charlemagne, the first Frank to be called an emperor of Rome (in 800 AD), the kings of the Franks had come to be recognized as heirs to the Western Roman empire. In the time of Charlemagne's grandsons (in 843 AD), the empire came to be divided into three sections, a western Romanized one corresponding very roughly to later France, an eastern part, corresponding very roughly to Germany, and a central one, Lotharingia, later referred to as Lorraine, which was eventually absorbed into the eastern empire. The Duchy of Limburg, like most of modern Belgium, was within Lower Lorraine. For a while, Lower Lorraine had its own single Duke. It is from this Duchy that the Duchy of Limbourg derived its Ducal status (as did the Duchy of Brabant, in a competitive claim to succession). 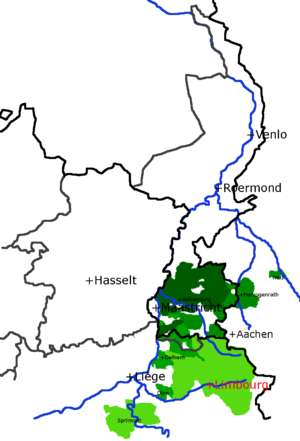 This shows the medieval "lands of Overmaas" and the Duchy of Limburg possessed in the Middle Ages by the Dukes of Brabant. Together these formed one province in the Seventeen Provinces, sometimes referred to as Limburg. The dark lines are modern borders.

The territory of the duchy of Limburg was formed in the 11th century around the town of Limbourg in present-day Wallonia. About 1020, Duke Frederick of Lower Lorraine, a descendant of Count Palatine Wigeric of Lotharingia, had Limbourg Castle built on the banks of the Vesdre river. His estates then comprised the districts of Baelen (with Limbourg), Herve, Montzen (since 1975 part of Plombières), Walhorn, and the southwestern exclave of Sprimont. They were inherited by Frederick's son-in-law Count Waleran of Arlon, who about 1065 began to call himself a "count of Limburg". Waleran also claimed Frederick's ducal title, which was finally acknowledged by Emperor Henry IV in 1101 in favour of Waleran's son Henry. This meant that Lower Lorraine now had two Duchies, that of Brabant, and that of Limburg, and the title of Duke of Lothier, still held by Brabant, eventually became ineffective.

As the Lorrainian ducal dignity was contested by the mighty Counts of Leuven, landgraves of Brabant, Waleran's descendants confined themselves to a "duke of Limburg", and achieved confirmation from Emperor Frederick Barbarossa in 1165. The rise of the Limburg dynasty continued, when Duke Waleran III in 1214 became Count of Luxembourg by marriage with the heiress Ermesinde and his son Henry IV in 1225 became Count of Berg as husband of heiress Irmgard. 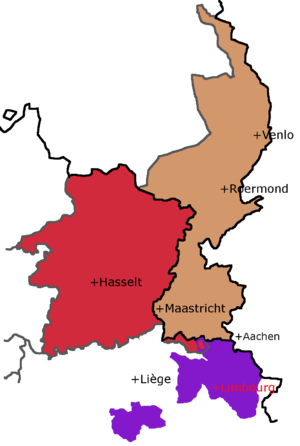 This shows the two modern provinces called Limburg next to the medieval Duchy they are both named after. The small overlap is Teuven and Remersdaal, in eastern Voeren, a part of modern Belgian Limburg since 1977.

However, upon the death of Henry's son Waleran IV in 1279, leaving only one heiress Irmgard, who had married Count Reginald I of Guelders but died childless in 1283, the War of the Limburg Succession broke out. The Duke of Brabant won the final Battle of Worringen in 1288, thereby gaining control of the Duchy of Limburg with the consent of King Rudolph I of Germany. Though it shared the fate of Brabant, Limburg remained a separate Imperial State, which in 1404 passed from Joanna of Brabant to Anthony of Valois, son of the Burgundian duke Philip the Bold. With the Burgundian heritage of Mary the Rich, it was bequested to her husband Maximilian I from the Austrian House of Habsburg in 1482. Combined with the Landen van Overmaas (the lands beyond the Meuse: Dalhem, Herzogenrath and Valkenburg) and Maastricht, the duchy became one of the Seventeen Provinces held by the Habsburgs within the Burgundian Circle established in 1512. Significant towns in Limburg proper were Herve, Montzen, Lontzen, Eupen, Baelen and Esneux.

After the abdication of Emperor Charles V in 1556, the Burgundian fiefs passed to his son King Philip II of Spain. The measures of the Council of Troubles implemented by Philip's stern governor, the Duke of Alba, sparked the Eighty Years' War, ended by the 1648 Peace of Westphalia. An area known as Limburg of the States, consisting of parts of Overmaas (but no part of the Duchy of Limburg itself), was ceded to the Dutch Republic. In 1661, the Dutch and the Spanish agreed on a re-partition of the county of Dalhem. The duchy of Limburg itself remained undivided under Spanish Habsburg rule as part of the Southern Netherlands, passing to the Austrian Habsburgs under the Treaty of Utrecht in 1713.

When the region was occupied by the French in 1794, the Austrian duchy of Limburg proper was disbanded and was incorporated into the département of Ourthe, while most of the Overmaas lands became part of the department Meuse-Inférieure, which is the basis of today's Belgian and Dutch provinces called Limburg. After the defeat of the French empire, the eastern, German-speaking part of Duchy's lands were given to Prussia in the Congress of Vienna along with several other territories along what is today the Belgian-German border, but after the First World War, these lands became Belgian, re-uniting the original parts of the old Duchy.