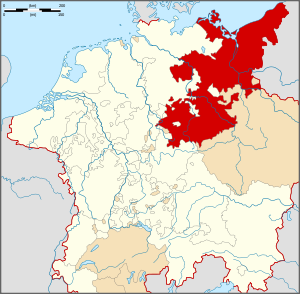 The Upper Saxon Circle at the end of the 16th century

The Upper Saxon Circle (German: Obersächsischer Reichskreis) was an Imperial Circle of the Holy Roman Empire, created in 1512.

The circle was dominated by the electorate of Saxony (the circle's director) and the electorate of Brandenburg. It further comprised the Saxon Ernestine duchies and Pomerania. The Lusatias that fell to Saxony by the 1635 Peace of Prague were never encircled.

The list of states making up the Upper Saxon Circle is based on that in the German Wikipedia article Obersächsischer Reichskreis.