Georgia in the American Civil War

From Infogalactic: the planetary knowledge core
Jump to: navigation, search
"Georgia in the Civil War" redirects here. For the internal conflict from 1991 to 1993 in the Republic of Georgia, see Georgian Civil War. 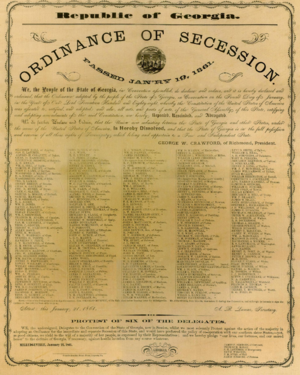 Facsimile of the 1861 Ordinance of Secession signed by 293 delegates to the Georgia Secession Convention at the statehouse in Milledgeville, Georgia January 21, 1861

Georgia was one of the original seven slave-states that formed the Confederate States of America in February 1861, triggering the civil war. The state governor, Joseph E. Brown, was a passionate believer in states’ rights, and wanted locally-raised troops to be used only for the defence of Georgia, in defiance of Confederate president Jefferson Davis, who wanted to deploy them on other battlefronts. When the Union blockade prevented Georgia from exporting its plentiful cotton in exchange for key imports, Brown ordered farmers to grow food instead, but the breakdown of transport systems led to desperate shortages.

There was not much fighting in Georgia until September 1863, when Confederates under Braxton Bragg defeated William S. Rosecrans at Chickamauga Creek. In May 1864, William T. Sherman started pursuing the Confederates towards Atlanta, which he captured in September, in advance of his March to the Sea. This six-week rampage destroyed the civilian infrastructure of Georgia, decisively shortening the war, but at a cost in human suffering that has never been forgotten. When news of the march reached Robert E. Lee’s army in Virginia, whole Georgian regiments deserted, feeling they were needed at home. The Battle of Columbus, fought on the Georgia-Alabama border on April 16, 1865, is reckoned by some criteria to have been the last battle of the war.

In December 1860, Georgian governor Joseph E. Brown opined that the election of Abraham Lincoln, an anti-slavery Republican to the U.S. presidency would result in the ending of slavery in the United States. He called upon Georgians to oppose the efforts of people towards ending slavery:

The following month, in January 1861, the Georgia Secession Convention issued an Ordinance of Secession, in which it outlined the causes that motivated the state to declare its secession from the Union. The ordinance cited the views of U.S. president-elect Abraham Lincoln and that of the Republican Party against "the subject of African slavery", anti-slavery sentiment in northern free states, and perceived support among northerners for equality for African Americans as reasons for Georgia's declaring of secession:

The people of Georgia having dissolved their political connection with the Government of the United States of America, present ... the causes which have led to the separation. For the last ten years we have had numerous and serious causes of complaint against our non-slaveholding confederate States, with reference to the subject of African slavery. ... The party of Lincoln, called the Republican party, under its present name and organization is of recent origin. It is admitted to be an anti-slavery party ... anti-slavery is its mission and its purpose. ... The prohibition of slavery in the territories, hostility to it everywhere, the equality of the black and white races ... were boldly proclaimed by its leaders, and applauded by its followers. ... The prohibition of slavery in the territories is the cardinal principle of this organization. ... These are the men who say the Union shall be preserved. ... Such are the opinions and such are the practices of the Republican Party ... if we submit to them, it will be our fault and not theirs.

In a February 1861 speech to the Virginia secession convention, Georgian Henry Lewis Benning stated that the main reason as to why Georgia declared secession from the Union was due to "a deep conviction on the part of Georgia, that a separation from the North-was the only thing that could prevent the abolition of her slavery."[3][4]

Governor Joseph E. Brown was a leading secessionist and led efforts to remove the state from the Union and into the Confederacy. A firm believer in state's rights, he defied the Confederate government's wartime policies. He resisted the Confederate military draft and tried to keep as many soldiers at home as possible to fight invading forces.[5] Brown challenged Confederate impressment of animals, goods, and slaves. Several other governors followed his lead.[6] During the war, Georgia sent nearly 100,000 men to battle for the Confederacy, mostly to the Virginian armies. Despite secession, many southerners in North Georgia remained loyal to the Union. Approximately 5,000 Georgians served in the Union army in units including the 1st Georgia Infantry Battalion, the 1st Alabama Cavalry Regiment, and a number of East Tennessean regiments.[7]

By summer 1861, the Union naval blockade virtually shut down the export of cotton and the import of manufactured items. Food that normally came by rail from the North were halted. The governor and legislature pleaded with planters to grow less cotton and more food. The planters refused because at first they thought the Union would not or could not fight. The planters then saw cotton prices in Europe soared and they expected Europe to soon intervene and break the blockade. The legislature imposed cotton quotas and made it a crime to grow an excess, but the food shortages continued to worsen, especially in the towns.[8] In more than a dozen instances across the state, poor white women raided stores and captured supply wagons to get such necessities as bacon, corn, flour, and cotton yarn.[9]

As conditions at home worsened late in the war more and soldiers deserted the army to attend to their suffering farms and families.[10]

Georgia was relatively free from warfare until late 1863. A total of nearly 550 battles and skirmishes occurred within the state, with the majority occurring in the last two years of the conflict. The first major battle in Georgia was a Confederate victory at the Battle of Chickamauga in 1863, which was the last major Confederate victory in the west. In 1864 Union general William T. Sherman's armies invaded Georgia as part of the Atlanta Campaign. Confederate general Joseph E. Johnston fought a series of battles, the largest being the Battle of Kennesaw Mountain, trying to delay Union armies for as long as possible as he retreated toward Atlanta. Johnston's replacement, Gen. John Bell Hood, attempted several unsuccessful counterattacks at the Battle of Peachtree Creek and the Battle of Atlanta, but Sherman captured Atlanta on September 2, 1864.

Union Maj. Gen. William T. Sherman invaded Georgia from the vicinity of Chattanooga, Tennessee, beginning in May 1864, opposed by the Confederate general Joseph E. Johnston. Johnston's Army of Tennessee withdrew toward Atlanta in the face of successive flanking maneuvers by Sherman's group of armies. In July, the Confederate president, Jefferson Davis replaced Johnston with the more aggressive John Bell Hood, who began challenging the Union Army in a series of damaging frontal assaults. Hood's army was eventually besieged in Atlanta and the city fell on September 2, setting the stage for Sherman's March to the Sea and hastening the end of the war.

Sherman's March to the Sea 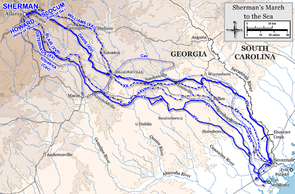 A map showing Sherman's March to the Sea from November to December 1864.

In November 1864, Sherman stripped his army of non-essentials, burned the city of Atlanta, and left it to the Confederates. He began his famous Sherman's March to the Sea, living off the land then burning plantations, wrecking railroads, killing livestock, and freeing slaves. Thousands of escaped slaves followed him as he entered Savannah on December 22.[11] After the loss of Atlanta, the governor withdrew the state's militia from the Confederate forces to harvest crops for the state and the army. The militia did not try to stop Sherman.[12]

Sherman's March was devastating to both Georgia and the Confederacy in terms of economics and psychology. Sherman himself estimated that the campaign had inflicted $100 million (about $1.4 billion in 2012 dollars)[13] in damages, about one fifth of which "inured to our advantage" while the "remainder is simple waste and destruction."[14] His army wrecked 300 miles (480 km) of railroad and numerous bridges and miles of telegraph lines. It seized 5,000 horses, 4,000 mules, and 13,000 head of cattle. It confiscated 9.5 million pounds of corn and 10.5 million pounds of fodder, and destroyed uncounted cotton gins and mills.[15]

Sherman's campaign of total war extended to Georgian civilians. In July 1864, during the Atlanta campaign, Sherman ordered approximately 400 Rosewell mill workers, mostly women, arrested as traitors and shipped as prisoners to the North with their children. There is little evidence that more than a few of the women ever returned home.[16]

The memory of Sherman's March became iconic and central to the "Myth of the Lost Cause" and neo-Confederates. The crisis was the setting for Margaret Mitchell's 1936 novel Gone with the Wind and the subsequent 1939 film. Most important were many "salvation stories" that tell not what Sherman's army destroyed, but what was saved by the quick thinking and crafty women on the home front, or by a Union soldier's appreciation of the beauty of homes and the charm of Southern women.[17]

In December 1864, Sherman captured Savannah before leaving Georgia in January 1865 to begin his Carolinas Campaign. However, there were still several small fights in Georgia after his departure. On April 16, 1865, the Battle of Columbus, was fought on the Georgia-Alabama border. In 1935, the state legislature officially declared this engagement as the "last battle of the War Between the States." [18]

It should be constantly kept in view, through all the bloody phases and terrible epochs of this relentless war, that slavery was the caus beli, that the principle of State Sovereignty, and its sequence, the right of secession, were important to the South principally, or solely, as the armor that encased her peculiar institution – and that every life that has been lost in this struggle was an offering upon the altar of African Slavery.

Re-entry to the Union

The war left most of Georgia devastated, with many war dead and wounded, and the state's economy in shambles. The slaves were emancipated in 1865, and Reconstruction started immediately after the hostilities ceased. The state remained poor well into the twentieth century. Georgia did not re-enter the Union until June 15, 1870, as the last of the former Confederate states to be re-admitted.

Many of Georgia's Civil War battlefields, particularly those around Atlanta, have been lost to modern urban development. However, a number of sites have been well preserved, including Chickamauga and Chattanooga National Military Park and Kennesaw Mountain National Battlefield Park. Other Civil War-related sites include Stone Mountain, Fort Pulaski, and the Atlanta Cyclorama, as well as Confederate Memorial Park.[20]

A number of antebellum mansions and plantations in Georgia are preserved and open to the public, particularly around Atlanta and Savannah. Portions of the Civil War-era Western & Atlantic Railroad have historical markers commemorating events during the war, including several sites associated with the Andrews Raid. Another area near Atlanta with Civil War history is in the Sweet Water Creek State Park in Douglas County, Georgia. At this location is one of the last standing buildings burned by General Sherman's army, New Manchester Mill.