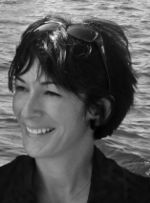 Ghislaine Maxwell (born 25 December 1961)[1] is a British associate of disgraced pedophile Jeffrey Epstein and the youngest child of Robert Maxwell. Maxwell moved to the United States after her father's death and has become an advocate for the ocean as founder of The TerraMar Project.

She founded a successful women's club named after the original Kit-Cat Club[2] in 18th Century London. Maxwell was also a director of Oxford United Football Club, during her father's ownership of the club.[3][4] Maxwell was fined £1,000 and banned from driving for one year in August 1996 after driving while intoxicated.[5]

Her father named his luxury yacht, the Lady Ghislaine in her honour, and it was near the yacht in the Canary Islands in 1991 that his body was found floating in the sea.[6] Though a verdict of death by accidental drowning was recorded, Maxwell has since stated that she believes her father was murdered,[7] commenting in 1997 that "He did not commit suicide. That was just not consistent with his character. I think he was murdered."[8] After his death, Robert Maxwell was found to have fraudulently appropriated the pension assets of his Mirror Group Newspapers to support its share price and was disgraced.[9]

Maxwell moved to the United States after her father's death, and has since become a prominent socialite in New York City.

She is the founder of The TerraMar Project.[10]

After moving to America, Maxwell and the billionaire American financier Jeffrey Epstein had a romantic relationship, and Maxwell remained close to him after their break-up.[11] Maxwell has attracted press coverage for her friendship with Prince Andrew, Duke of York, the second son of Queen Elizabeth II, who attended social functions with her in New York.[12] Maxwell introduced Epstein to Prince Andrew and the three often socialized together.[13]

In 2008, Epstein was convicted of soliciting a minor for prostitution and served 13 months of an 18-month jail sentence. Details of a civil lawsuit made public in January 2015 contained a deposition from a woman, identified as 'Jane Doe 3', accusing Maxwell of having recruited her in 1999, when she was a minor, to have sex with Epstein. A 2018 expose by the Miami Herald revealed Jane Doe 3 to be Virginia Roberts. Roberts asserted that she was introduced by Maxwell to Epstein and then "groomed by the two for his pleasure, including lessons in Epstein's preferences during oral sex."[14]

Maxwell has repeatedly denied any involvement in Epstein's crimes.[11] In a 2015 statement, Maxwell rejected allegations that she has acted as a "madame for Epstein" and "facilitated Prince Andrew's acts of sexual abuse." Maxwell's spokesperson said that "the allegations made against Ghislaine Maxwell are untrue" and that she "strongly denies allegations of an unsavoury nature, which have appeared in the British press and elsewhere and reserves her right to seek redress at the repetition of such old defamatory claims."[13][15]

According to the Miami Herald, Virginia Roberts Giuffre, one of Epstein's victims, sued Maxwell in federal court in the Southern District of New York in 2015. Giuffre asserted that Maxwell and Epstein trafficked her and other underage girls, often at sex parties that Epstein hosted at his homes in New York, New Mexico, Palm Beach, and the U.S. Virgin Islands. Maxwell called her a liar. Giuffre sued for defamation. While details of the settlement were not made public,[16] the case was settled in Giuffre’s favour, with Maxwell paying Giuffre "millions."[17]

On 16 April 2019, a new victim, Maria Farmer, went public and filed a sworn affidavit in federal court in New York, saying that she was sexually assaulted and her then-15-year-old sister was molested by Epstein and his companion, Ghislaine Maxwell, in 1996.[18]