Horseshoe Curve is a three-track railroad curve on the Norfolk Southern Railway's Pittsburgh Line in Blair County, Pennsylvania. The curve itself is about 2,375-foot (724 m) long and 1,300 feet (400 m) in diameter; it was completed in 1854 by the Pennsylvania Railroad as a way to lessen the grade to the summit of the Allegheny Mountains. It eventually replaced the time-consuming Allegheny Portage Railroad, the only other route across the mountains for large vehicles.

The rail line has been important since its opening, and during World War II the Curve was targeted by Nazi Germany in 1942 as part of Operation Pastorius. The Curve was later owned and used by Pennsylvania Railroad successors Penn Central, Conrail, and Norfolk Southern. Horseshoe Curve was added to the National Register of Historic Places and designated a National Historic Landmark in 1966, and became a National Historic Civil Engineering Landmark in 2004.

Horseshoe Curve has long been a tourist attraction with a trackside observation park being completed in 1879. In the early 1990s the park was renovated and a visitor center built; the Railroaders Memorial Museum in Altoona manages the center, which has exhibits pertaining to the curve. 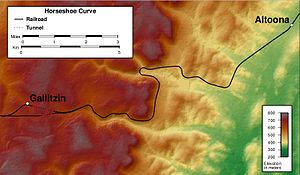 Topographic map of the area around the Horseshoe Curve

Horseshoe Curve is on the Pittsburgh Line, the Norfolk Southern Railway Pittsburgh Division main line between Pittsburgh and Harrisburg, Pennsylvania. Westbound trains climb a maximum grade of 1.85 percent for 12 miles (19 km) from Altoona to Gallitzin;[2] just west of the Gallitzin Tunnels trains pass the summit of the Allegheny Mountains, then descend for 25 miles (40 km) to Johnstown on a grade of 1.1 percent or less.[2]

The curve is 5 miles (8 km) west of Altoona in Logan Township, Blair County at railroad milepost 242. The Blair County Veterans Memorial Highway (SR 4008) follows the valley west from Altoona and tunnels under the curve.[3] Horseshoe Curve bends around a dam and lake, the highest of three reservoirs along the valley which are owned by the Altoona Water Authority and supply water to the city.[4] Horseshoe Curve spans two ravines formed by creeks: Kittanning Run on the north side of the valley, and Glenwhite Run on the south.[5][6] 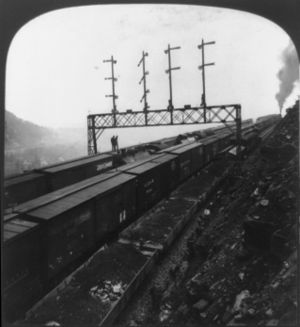 Four trains on four tracks passing each other on Pennsylvania Railroad mainline near the curve, c. 1907 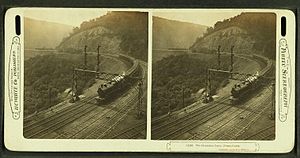 Stereo card of a train on the curve, circa 1907

Using surveys completed in 1842,[12] the state's engineers recommended a route west from Lewistown that followed the ridges with a maximum grade of 0.852 percent on the 84-mile (135 km) line.[13] The Chief Engineer for the Pennsylvania Railroad, John Edgar Thomson, instead chose a route on lower, flatter terrain along the Juniata River and accepted the resulting steeper grade west of Altoona. The valley west of Altoona was split into two ravines by a mountain; surveys had already found a route with an acceptable grade east from Gallitzin to the south side of the valley, and Horseshoe Curve allowed the same grade to continue to Altoona. Engineers built an earth fill over the first ravine encountered while ascending, formed by Kittanning Run, cut the point of the mountain between the ravines, and filled in the second ravine, formed by Glenwhite Run.[9]

From around the 1860s to just before World War II passengers could ride to Kittanning Point station near the Curve.[16][17] Two branch railroads connected to the main line at Horseshoe Curve in the early 20th century; the Kittanning Run Railroad and the railroad owned by the Glen White Coal and Lumber Company followed their respective creeks to nearby coal mines.[18] The Pennsylvania Railroad delivered empty hopper cars to the Kittanning Point station which the two railroads returned loaded with coal.[18] Across from the station, a spur track on the hillside supplied a coal trestle, where trains could take on fuel and water during the early 1900s.[19] A reservoir was built at the apex of the Horseshoe Curve in 1887 for the city of Altoona; a second reservoir, below the first, was finished in 1896.[20] The third reservoir, Lake Altoona, was completed by 1913.[21] A macadam road to the curve was opened in 1932 allowing access for visitors, and a gift shop was built in 1940.[16]

During World War II PRR carried troops and matériel for the Allied war effort, and the Curve was under armed guard.[24] The military intelligence arm of Nazi Germany, the Abwehr, plotted to sabotage important industrial assets in the United States in a project code-named Operation Pastorius.[25] In June 1942 four men were brought by submarine and landed on Long Island, planning to destroy such sites as the Curve, Hell Gate Bridge, Alcoa aluminum factories and locks on the Ohio River.[26] The would-be saboteurs were quickly apprehended by the Federal Bureau of Investigation after one, George John Dasch, turned himself in.[27] 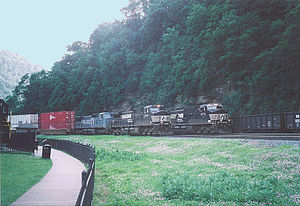 Three Norfolk Southern freight trains pass each other on the curve in 2006.

During the 1954 celebration of the centennial of the opening of Horseshoe Curve, a night photo was arranged by Sylvania Electric Products using 6,000 flashbulbs and 31 miles (50 km) of wiring to illuminate the area.[28] The stunt also commemorated the 75th anniversary of the incandescent light bulb. Pennsylvania steam locomotive 1361 was placed at the park inside the Horseshoe Curve on June 8, 1957.[29] It is one of 425 K4s-class engines, the principal passenger locomotives on the Pennsylvania Railroad that regularly plied the curve.[30] The Horseshoe Curve was listed on the National Register of Historic Places and was designated a National Historic Landmark on November 13, 1966.[1][31] The operation of the observation park was transferred to the city of Altoona the same year.[32] The Pennsylvania Railroad was combined with the New York Central Railroad in 1968. The merger created Penn Central, which went bankrupt and was taken over by the federal government in 1976, as part of the merger that created Conrail. The second track from the inside at the Horseshoe Curve[33] was removed by Conrail in 1981.[34] The K4s 1361 was removed from the curve for a restoration to working order in September 1985 and was replaced with the ex-Conrail EMD GP9 diesel-electric locomotive 7048 that was repainted into a Pennsylvania Railroad scheme.[16]

Starting in June 1990, the park at the Horseshoe Curve underwent a $5.8 million renovation funded by the Pennsylvania Department of Transportation and by the National Park Service through its "America's Industrial Heritage Project".[35] The renovations were completed in April 1992 with the dedication of a new visitor center.[35] In 1999 Conrail was divided between CSX Transportation and Norfolk Southern, with the Horseshoe Curve being acquired by the latter. The Horseshoe Curve was lit up again with fireworks and rail-borne searchlights during its sesquicentennial in 2004 as an homage to the celebrations in 1954.[36][37] It was designated a National Historic Civil Engineering Landmark by the American Society of Civil Engineers in 2004.[38]

Train count peaked in the 1940s with over 50 passenger trains per day along with many freight and military trains.[24] Demand for train travel dropped greatly after World War II as highway and air travel became popular.[39] The curve is still busy as part of Norfolk Southern's Pittsburgh Line and, as of 2008[update], was passed by 51 scheduled freight trains each day, not including locals and helper engines which can double the number.[40] The 3,000-horsepower (2,200 kW) EMD SD40-2s and SD40Es helpers are coupled to the rear of long trains, providing power on the ascent and assisting in braking on the descent.[41][42][43] The 2012 Norfolk Southern track chart lists the annual traffic density passing Horseshoe Curve as 111.8 million short tons (101.4 Mt), including locomotives.[10] Amtrak's Pennsylvanian between Pittsburgh and New York City rounds the curve once each way daily. Average speed for trains at Horseshoe Curve are 30 miles per hour (48 km/h) for freight and approximately 41 miles per hour (66 km/h) for passenger trains.[10][44]

The Railroaders Memorial Museum in Altoona manages a visitor center next to the curve which is open April to October.[45] The 6,800-square-foot (632 m2) center has historical artifacts and memorabilia relating to the curve, and a raised-relief map of the Altoona–Johnstown area.[35] Access to the curve is by a 288-foot (88 m) funicular or a 194-step stairway.[16][45] The funicular is single-tracked, with the cars passing each other halfway up the slope; the cars are painted to resemble Pennsylvania Railroad passenger cars.[35] Along with the locomotive, a former "watchman's shanty" is in the park.[46] Horseshoe Curve is popular with railfans; watchers might see three trains passing at once.[45][47] As part of Norfolk Southern's 21st Century Steam program, the former Nickel Plate steam locomotive 765 traversed Horseshoe Curve in August 2012—the first steam locomotive to do so since 1977—while deadheading to and from Harrisburg.[48] Nickel Plate 765 returned to the curve in May 2013 with public excursion trains from Lewistown to Gallitzin.[49]

Panorama of the observation park inside the curve showing the watchman's shanty (left), locomotive 7048 (center) and the funicular (right), October 2011.