James FitzJames, 1st Duke of Berwick, 1st Duke of Fitz-James, 1st Duke of Liria and Jérica (21 August 1670 – 12 June 1734) was an Anglo-French military leader, illegitimate son of King James II of England by Arabella Churchill, sister of the 1st Duke of Marlborough. Berwick was a successful general in the pay of Louis XIV of France.

FitzJames was born at Moulins in France before his father's accession to the throne, and was brought up a Roman Catholic and educated in the College of Juilly, the Collège du Plessis, and the Jesuit College of La Flèche.[1] He went into the service of Charles, Duke of Lorraine and was present at the siege of Buda. FitzJames was created Duke of Berwick, Earl of Tinmouth and Baron Bosworth by his father in 1687.[2] He then returned to Hungary and participated at the Battle of Mohács.

Berwick returned to England and was made Governor of Portsmouth. King James made him a Knight of the Garter, and appointed him Colonel of The Blues to replace the Protestant Earl of Oxford.[3] The post had been coveted by the Earl of Marlborough, but Fitzjames was earmarked for command, as Catholics replaced Anglicans.[4] Officers were required to answer 'three questions' designed by the king to test their loyalty. Berwick was with his father at Salisbury, when key units deserted to the Prince of Orange. James II was overthrown in December 1688 and Berwick went into exile with him, taking an active part in the Irish campaign, including the Battle of the Boyne during which he led a charge, was unhorsed and almost killed in the melee.[5] But due to the invasion of the Prince of Orange and the subsequent Glorious Revolution, the installation never took place.[6] Berwick in all conscience could not remain with the Colonel of The Blues' Troop he had served since 1682; he refused to betray his old patronne.[7] On 2 August Berwick was one of the Generals, with Patrick Sarsfield and Boisselau who shored up the defences at Limerick awaiting the Williamite assault; they rode north across the Shannon with a few Guards.[8] On 22 June 1691, Berwick was with the French general's command, St Ruth, at Aughrim, a site of his choosing when General Ginckel appeared over the hill with a superior force of 18,000 Williamites. The defenders were surrounded on one side by peat bog, and the other on Kilcommodon Hill. Berwick was with Sarsfield's corps on the Irish right, who had an uncommitted reserve, when The Blues broke through the Irish lines on the left, broke the Irish Dragoons, and caused a general panic to ensue. General St Ruth was decapitated by a stray cannonball, but Sarsfield was too late to rescue the situation. He retired with Berwick to the relative safety of Limerick, which Ginckel besieged on 25 August. Under the terms of Treaty of Limerick, signed on 3 October, all Irish contingents were banished to the continent forever. These soldiers became known as the Wild Geese: mercenaries forbidden from setting foot in Britain. James II created Berwick Colonel of the 1st Troop, Wild Geese. Berwick arrived too late at the siege of Cork with 4,000 French troops, but unable to effect a result, he withdrew; Marlborough marched west to Kinsale to deal with 18,000 Frenchmen.[9] He undertook a number of secret visits to England on behalf of the Jacobite cause.[10]

In the service of King Louis

After his father's final exile, Berwick served in the French army under Marshall Luxemburg. He fought at the battles of Steenkerque. Marshall Luxemburg fell into King William's trap set against superior numbers. But reinforcements failed the English, and the French rallied to send the Maison Militaire du Roi infantry downhill. Berwick was in the charge that broke the English lines. They were driven from the field with heavy losses.[11] Berwick was one of Luxemburg's principal officers, and in 1694 commanded the centre of a large French army. After several forced marches to entrap William, they crossed the Meuse again before stopping them near Neerwinden. Berwick struggled against the Foot Guards, who forced his men to retreat in the Landen. Berwick was taken prisoner by his cousin, Charles Churchill, and ransomed for 30,000 florins;[12] and later was exchanged for a wounded Duke of Ormonde.[13] At the same time a huge number of 400 ships bound for Smyrna were taken by the French. Because of his support for his father and service in the French army against England, he was attainted in 1695, and his British peerages forfeit. 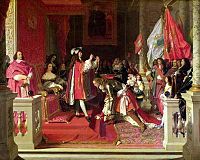 Louis XIV of France creates James, Duke of Fitz-James in the Peerage of France, after the Battle of Almanza.

As a soldier, Berwick was highly esteemed for his courage, abilities and integrity. But when Marlborough challenged the French to fight at Liege, Boufflers retreated.[14] In June 1704, Berwick commanded a combined Franco-Spanish army but they did not seriously challenge the enemy, only taking a few fortreses.[15] By July 1706 Berwick had established increasing dominance in the north of Spain. In August the Earl of Galway was forced to evacuate Madrid by Bourbon partisans, allowing Berwick into winter quarters. As a result of distinguished service in the War of the Spanish Succession, he became a French subject and was appointed a Marshal of France after his successful expedition against Nice in 1706.

Louis XIV was in the habit of sending his Marshalls lengthy orders. In 1707 he wrote the duc de Vendome: "...it will be absolutely necessary for the Duke of Berwick to detach a similar proportion and to send a sufficient number of troops to the Elector of Bavaria..."[16] The French allocated 75 battalions and 140 squadrons to the Rhine front, giving Berwick a comfortable numerical superiority.[17] On 25 April 1707, Berwick won a great and decisive victory at the Almanza, where an Englishman at the head of a Franco-Spanish army defeated Ruvigny, a Frenchman at the head of an Anglo-Portuguese-Dutch army.[18] Five English, six Dutch, and three Portuguese regiments were captured, all the cannon and regimental colours. The defeat ended British hopes of putting the Austrian candidate on the Spanish throne. Berwick was "the brave English general who had defeated the French" to confused Tories.[19] After Almanza, Berwick was created Duque de Liria y Xérica (English: Duke of Liria and Jérica) and Lieutenant of Aragon by Philip V of Spain in 1707, and Duc de Fitz-James (English: Duke of Fitz-James) in the Peerage of France by Louis XIV in 1710. But in the meantime in July 1707, Berwick heard the Aliies had left Maastricht, sent 34 battalions and 75 squadrons north to meet Prince Eugene's army. But Marlborough and the English army were none the wiser as to the enemy's whereabouts. In the spring 1708, the Dutch raided Berwick's camp at Cenco killing all the men in their tents, Berwick was heard to remark that he could not believe the English "could have been so barbarous".[20] By July Berwick had caught up with Vendome's army at Oudenarde, leaving Berwick yet to arrive, anticipating Vendome would retreat to join up with Berwicks's force at Gavre six miles away.[21] But Berwick was at Givet on River Meuse when he heard of Vendome's heavy defeat. Berwick rescued 9,000 stragglers using them to garrison Douai, and then Lille, where he prepared to be besieged. Unfortunately the English arrived first, destroying the defensive ramparts, before Berwick could reach the lines. Nonetheless on 3 August, Berwick reckoned a siege was afoot reinforcing the garrison with 20 battalions and 7 squadrons of dragoons with horses. Lille was a heavily defended and fortified town, important to King Louis. Astutely, General Berwick realized Marlborough was trying to bring his battered army to battle, despite constant missives from Versailles ordering an immediate attack.[22] On 22 October Marshall Boufflers finally gave up and marched out to Douai. But crucially, Berwick's army remained intact.[23]

Berwick was Marlborough's nephew, long before he became a Marshall of France remained in contact with his uncle's family when they were in exile that had begun at Lille.[24] Berwick sent an equerry to purchase some horses off the Allies.[25] Furthermore his widowed mother married Colonel Godfrey of the English army. In 1710, the Tories won the election, sweeping away Protestant opposition to a peace with France. Berwick encouraged by Louis XIV planned an army to invade England.[26] With Marlborough out of favour, France was saved the indignity of defeat. But Berwick warned the Old Pretender not to trust his uncle, since his spies at court knew Sarah, Duchess of Marlborough was a whig.[27]

The last great event of the War of the Spanish Succession was the storming of Barcelona by Berwick, after a long siege, on 11 September 1714. In that year, he was appointed a Knight of the Golden Fleece. Trying to explain the violent failure of the Jacobite Risings, the Old Pretender "never forgave his half-brother, The Blues ex-colonel, Berwick, now an experienced and competent commander, for declining to lead his forces".[28] Soon afterwards, Berwick was appointed military governor of the province of Guienne, where he became friendly with Montesquieu. In 1718 he led an army to Spain, against Philip V, in the War of the Quadruple Alliance. Many years of peace followed this campaign, and Berwick was not again called to serve in the field until 1733. In that year he was chosen to lead the Army of the Rhine in the War of the Polish Succession, successfully besieging Kehl in 1733. A year later he was decapitated by a cannonball at the Siege of Philippsburg, on 12 June 1734. 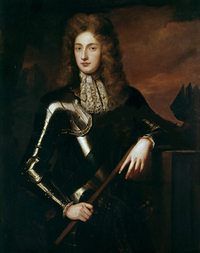 Berwick had children by both his marriages. His descendants were the French Ducs de Fitz-James and the Spanish Duques de Liria and later the Dukes of Alba.

Berwick fell in love with General Patrick Sarsfield's 19-year-old pregnant widow. They married in Saint-Germain-en-Laye (Yvelines) on 26 March 1695, two years after Sarsfield's death in the Battle of Landen on 29 July 1693. This was Honora, Countess of Lucan (formerly known as Lady Honora Burke or Lady Honora de Burgh; b. Portumna Castle, Co. Galway, 1674 – d. Pézenas, 16 January 1698), the daughter of The 9th Earl of Clanricarde, an Anglo-Irish peer.[29] Berwick raised Sarsfield's son, James Sarsfield, 2nd Earl of Lucan, who died childless in 1718, as his own.[30] They had one son:

After Honora Burke's death just three years later in 1698, Berwick married Anne Bulkeley (d. 12 June 1751), daughter of Henry Bulkeley, Master of the Household of both Kings Charles II and James II, in Paris on 18 April 1700. They had 10 children: