Charles V, Karl V. Leopold, (Charles Léopold Nicolas Sixte; 3 April 1643 – 18 April 1690), son of Nicolas François, Duke of Lorraine, and Claude Françoise de Lorraine. Karl Leopold was born in Vienna, became the brother in law of Emperor Leopold, and son in law of emperor Ferdinand III. He was a second cousin once removed of his contemporary Louis XIV through the king's grandmother Marie de' Medici. He was from a long established family of Lothringen, who had to take refuge from the forces of France. However, he managed to become the titular Duke of Lorraine in 1675 at a time when Lorraine was occupied by France. Since 1663 he had been in imperial Habsburg service and had a very notable military career. In 1683 he became an imperial generalissimo.

Charles V was the nephew of Charles IV, Duke of Lorraine, who was forced to briefly abdicate his title to his younger brother Nicolas François, Duke of Lorraine when the French invaded Lorraine in 1634. The French withdrew from the Duchy in 1661, but then invaded it once again in 1670.[1]

Charles V Duke of Lorraine was born on April 3, 1643 to Nicolas Francis in Vienna. Charles V's claim to the duchy was not recognized by his uncle, Charles IV. Since his prospects were not good he officially joined the court of Vienna in 1662. He became a distinguished soldier in service to the Habsburgs and competed twice unsuccessfully for election as King of Poland.[2]

The Duke was able to first distinguish himself at the Battle of Saint Gotthard in 1664. He was under the service of Montecuccoli, the Imperial Generalissimo at the time. When they were flanked by the enemy, Charles was able to repel them and help win the battle.[3] He continued to be involved in the wars the Habsburgs fought with the French. He received a head wound at the Battle of Seneffe in 1674. Charles was present at the Siege of Philippsburg in 1676.[4] He attained the rank of Field-Marshal in 1676.[2] During this time he also survived a bout of smallpox,[5] and in 1678 he survived falling off a bridge at Philippsburg. He was appointed the Emperor's vicerory in the Tirol.[2] At the Treaty of Nijmegen in 1679 it was confirmed that he was Duke of Lorraine but he was still not allowed to be ruler of the province.[6]

Charles V, Duke of Lorraine was promoted to Generalissimo of the Habsburg army in 1683 right before the siege of Vienna. Charles knew he had no chance of directly engaging the forces of the Grand Vizier Kara Mustafa Pasha. Charles only had about 36,000 men at his disposal at the time of siege.[7] In addition, while he was marching to Vienna, 6000 of his Hungarian soldiers defected.[8] Charles chose to position his men several miles north of Vienna. He then proceeded to aid the city by raiding the Turkish army encampments, and giving supplies and other provisions to the city from time to time. The battle was fierce. Thanks to the work of Pope Innocent XI, the Habsburgs were able to receive aid from what would come to be called the Holy League.[9] This combined force with the leader John III Sobieski and Charles V was able to defeat the besieging Turkish army at the Battle of Kahlenburg outside Vienna on September 12, 1683. This victory resulted in a landslide of victories for the Habsburgs under the leadership of Charles. 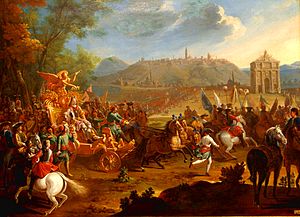 In the subsequent years Charles was able to gain a number of significant victories against the Turks. With the Siege of Neuhausel in 1685, Charles was able to take all of upper Hungary. At this battle his army completely destroyed a 3,000 man garrison of Turkish soldiers.[10] After this huge victory Charles besieged the city of Buda for two months, claiming victory in 1686. The final, crushing blow was the second Battle of Mohacs in 1687. Charles, in five years, made gains that had been a century's worth of conquest by the Ottomans.[11] His success enabled him to turn his attention towards Transylvania where, in 1689, he effectively made the kingdom a protectorate of the Habsburgs, and convinced the king to agree to supply his troops with much needed resources.[12]

War of The Holy League

Charles was not able to see that a peace treaty was struck with the Turks because the Habsburgs ordered him to move his forces to the River Rhine, where Louis XIV had begun to assert aggression. However, after a brief period of limited success against the French, he fell ill and suddenly died on April 8, 1690.[13] The death was seen by many to be tragic. According to Voltaire Louis XIV paid tribute to him with the words, "I have lost the greatest, wisest and most generous of my enemies."

Charles V, Duke of Lorraine, since he was essentially stripped of all his own hereditary lands, had to work at gaining property for himself. He was engaged to marry Marie Jeanne of Savoy on 4 Feb 1662. However, he abandoned this marriage when he left the French court for the imperial.[14] His brother Ferdinand Philip of Lorraine died in 1659 and Charles inherited the Duchy of Bar from him. In 1669, he attempted to get elected as King of Poland, but was defeated in the election by Michael Korybut Wisniowiecki.[15] In 1678, he married Eleanor of Austria, the widow of Wisniowiecki.[16][14] She was the daughter of Ferdinand III, Holy Roman Emperor. From this marriage he gained the territories of Gonzaga and Mantua. He again tried to get the crown of Poland but lost in the election to John Sobeski.[17] The marriage to Elenora proved to be very prosperous for his family when later on his grandson, Francis I, became Holy Roman Emperor.

For all of these sources go to Early English Books Online, [1]